By Navneet Mundhra After biding his time in wilderness, Awana's life turned over a new leaf in last season. He bagged 35 wickets in the last Ranji season - the highest by any Delhi bowler. His joy knew no bounds when KXIP signed him for IPL. He now hopes to make up for the lost time and also fulfill his dream of representing India at an international level. 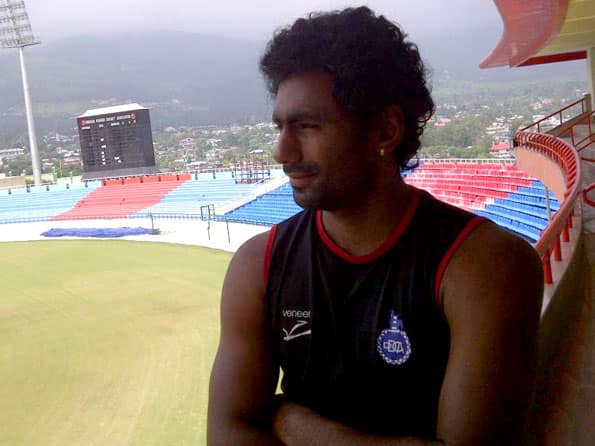 On Friday, Parvinder Awana got the top four batsmen of the Royal Challengers to fight a valiant battle in a losing cause. His performances won lavish praises, which included the Kings XI Punjab captain, David Hussey â leading the team for the injured Adam Gilchrist

Parvinder Awana, 25, is one of the most promising fast bowlers in the domestic cricket circuit of India. He burst on to the cricketing landscape when he won the ESPN Scorpio Speedster Contest in 2004. He impressed everyone with his raw pace and uninhibited approach towards the fast bowling. During the contest, he bowled at 138 kph and emerged victorious. Ashok Dinda was a close second and both the bowlers were sent to Brisbane, Australia, to learn the ropes of fast bowling from former Australian fast bowler Damien Fleming.

Despite the recognition, it took Awana almost three years to break into the first-class team of Delhi. But he immediately created waves by snapping up a hat-trick in his second first-class match and became only the fourth bowler from Delhi – after Ravinder Pal, Bishan Singh Bedi and Shankar Saini – to snaffle a first-class hat-trick.

From there on, his career has been a roller-coaster ride. Despite his spirited performance, he was not the regular member of Delhi’s squad in the first couple of years. Awana got injured in 2010-2011 and it didn’t help matters either. His contemporaries – Vinay Kumar, Ashok Dinda, Umesh Yadav and Varun Aaron – went on to play for India, while he was left behind to lick his wounds.

His Delhi team-mates grabbed the lucrative IPL contacts, but Awana’s luck wasn’t his ally in this aspect as well. He was chosen for the Kolkata Knight Riders (KKR) and Mumbai Indians (MI) training camps but it didn’t fetch the contract.

After biding his time in wilderness, Awana’s life turned over a new leaf in last season. He bagged 35 wickets in the last Ranji season – the highest by any Delhi bowler. His joy knew no bounds when Kings Xi Punjab (KXIP) signed him for IPL. He now hopes to make up for the lost time and do well for his IPL franchise and also fulfill his dream of representing India at an international level.

On Friday, Awana got the top four batsmen of the Royal Challengers – Mayank Agarwal, Chris Gayle, Virat Kohli and Saurabh Tiwary – to fight a valiant battle in a losing cause. His performances won lavish praises, which included the Kings XI Punjab captain, David Hussey – leading the team for the injured Adam Gilchrist.

Excerpts from Awana’s interview with CricketCountry which was done before Friday’s match:

CricketCountry (CC): How did you warm up to cricket? Who were your childhood heroes who exhorted you to become a fast bowler?

Later, I won the contest in 2004, which was organised by ESPN in collaboration with Scorpio, by bowling at the speed of 138 kph. Ashok Dinda came second. It was a great feeling for me and a lot more people started to notice me.

CC: And immediately after winning the contest you went to Brisbane for training at the Australian Centre of Excellence.

PA: In fact both of us (Dinda too) went there and were trained and guided by Damien Fleming. He was a brilliant fast bowler of his time for Australia and to have had the opportunity of honing my skills under his vigilant eyes was very satisfying. Not only did he impart the knowledge about the technical side of bowling, but he also taught us the mental aspect. I was a novice at that time, a tear-away fast bowler with little knowledge about the finer points of fast bowling. He taught us how to outthink a batsman. I also got to know about the significance of fitness level and what regime a fast bowler needs to undertake to stay completely fit. The time I spent with Fleming was thoroughly rewarding.

CC: You had a dream start to your first-class career where you picked a hat-trick against Maharashtra in only your second first-class game. Tell us something about that.

PA: It was on the fourth day of the match. The match was drifting towards a tame draw and in the context of the match, the hat-trick was eminently crucial as it enabled us in securing an outright win. I got Vishal Bhilare and Kedar Jadhav lbw and then I knocked over Sairaj Bahutule. I went round the wicket, pitched the ball on good length, and it straightened to hit the top of Bahutule’s off-stump.

CC: After making waves in the early part of your first-class career, you haven’t taken that big leap yet while many of your contemporaries raced ahead of you. Would you agree?

PA: Well, to an extent, yes. I was bowling quite well when I started off in late 2007 and in the next two seasons, I chalked up 28 and 29 scalps respectively. Just when I was about to make the big cut, I was injured and missed the better part of 2010-11 Ranji seaon. The rehabilitation took time and it was then that my contemporaries latched onto the chances they got and made the name for themselves. That’s destiny! I am glad the likes of Umesh Yadav, Varun Aaron and Vinay Kumar have done very well for themselves. It is a dream of every cricketer to represent his country and hopefully, I shall do that one day.

CC: Could you give us a state of your mind when you were battling with injury?

PA: An injury to a fast bowler at the start of his career is always a huge setback. Not only does it affect your body and form, there are all sorts of negative thoughts which creep into your mind. Insecurity cripples your mental outlook but on the positive side, you learn to deal with the drills of a cricket’s life. It teaches you the importance of being patient and resilient. The role of your family and close friends become essential as during those dark hours, their motivation and faith keep your spirits high.

I have learnt to value success more after going through trouble. I am happy that I came through well in my comeback season where I captured 35 wickets to become the highest wicket-taker for Delhi in 2011-2012. In the Deodhar Trophy semi-final, I captured six wickets against Central Zone and helped my team into the final.

CC: Who do you turn to when you need advice? Who are the people who have contributed considerably in your cricketing career?

PA: When I started my career, I got the support of almost all the Delhi team-mates. But, I wasn’t a regular fixture in the team in the first couple of years. Things changed after that. Ashish bhai (Ashish Nehra) has always been encouraging. I meet and talk to Viru bhai (Virender Sehwag) and Gautam bhai (Gautam Gambhir) whenever they’re in town. Rahul Sanghvi, former Delhi and Indian cricketer, takes keen interest in my career and stays in touch with me regularly. Aakash Chopra and I share a warm rapport. The Delhi selectors showed confidence in me, especially after I returned from the injury. That was a huge morale-booster.

I was lucky to spend some quality time with Wasim Akram and Shaun Pollock during my stints with Kolkata Knight Riders (KKR) and Mumbai Indians (MI) when I was invited to their training camps. Both are great fast bowlers and their tips came in handy. Akram taught me a lot about seam movement, while Pollock helped me enormously with my out-swingers. Insights from these legends helped me a lot in my last season.

CC: How has the journey been so far with Kings XI Punjab so far?

PA: The experience so far has been incredibly phenomenal. Adam Gilchrist, our captain, is one of the finest cricketers of this era and is a wonderful person. When he arrived in India, he had done his share of research and he was aware of my performances. He keeps tab on the performances of all his team-mates, even outside the ambit of IPL. He congratulated me for the sterling show I had put up and told me to stay focused. During our net sessions, he was impressed with my bowling and had some encouraging words. Coming from the man of his eminence and stature, it made me feel very good and I performed well in my debut IPL match against Pune warriors India (PWI). I conceded only 18 runs in four overs which I think is a fine performance in this format.  I am looking forward to make more meaningful contributions in the matches to come and help my team win matches. We do have a reasonably good team at our disposal and I am sure if we play as a unit, we have a good chance to qualify for the play-offs.