Siddle has stated that Misbah would be a key wicket for Aus in the Test series vs Pak.

Part of the quartet of bowlers that tormented the English batsmen in the Ashes earlier this year, Peter Siddle and the others appeared to be side shows to the might of Mitchell Johnson. However, those underestimating the skills of the 29 year-old fast bowler would be well advised do so at their peril.

The powerful physical and sometimes hostile presence of Siddle has lent great strength to Australia’s pace bowling attack since his debut in 2008 against India. And this was no ordinary debut. He started off with hitting Gautam Gambhir on the head with his first ball in Test cricket and later claimed the wicket of Sachin Tendulkar as his maiden Test wicket.

He has fought off a stress fracture of the back to become one of Australia‘s formidable fast bowlers. Mainly used by Australia in Test matches, Siddle has taken 188 Test wickets in 53 matches with best innings figures of six for 54 and also has the honour of being the the ninth Australian to take a Test hat-trick.

Recalled to Australia to begin training for the upcoming series against Pakistan in the UAE, Siddle finished his season with Nottinghamshire, in which his 11-match stint yielded 37 wickets at an average of 31.48. In an exclusive interview with PakPassion.net, Siddle spoke about his spell with Nottinghamshire, the experience of playing with legends at the Marylebone Cricket Club (MCC) versus Rest of the World game at Lord’s, his response to being told that he needed to bowl quicker and also looked forward to the challenges in the upcoming Test series against Pakistan in the UAE.

PakPassion.net (PP): You were playing for Nottinghamshire earlier this season, how do you feel your stint went with them?

Peter Siddle (PS): Yes it was a good spell. I enjoy coming over to England and playing for Nottinghamshire. It’s a great club with great people and it was sad to leave them early especially with them being near the top of the Championship table, but hopefully I can return there in future.

PP: Did you achieve the targets you had set yourself with Nottinghamshire?

PS: I didn’t really set myself any targets or goals. When I was growing up I wanted to come over to England and experience County cricket and to have that opportunity now and hopefully many more seasons in future is great. It’s something I enjoyed and it was easy to fit in at a great club like Nottinghamshire.

PP: How was the experience of taking part in the MCC versus Rest of the World match held earlier this year at Lord’s?

PS: It was good fun. Obviously I’d grown up watching some of those greats. It was an honour to be playing alongside and against them and to share a changing room with them and chat away with them as if it was any other changing room I had ever been in. It was a great day and the cricket turned out to be pretty good and it was good to score a few runs.

PP: Your last one day international was back in 2010. Do you not feel that you could make an impact for Australia in the fifty over format?

PS: It was my decision in the first place before the back to back Ashes series to not be available. I stopped playing one day cricket for Victoria and obviously Australia so I could concentrate on the Ashes.

I shot myself in the foot a little bit by not playing in the one day format and just haven’t played enough cricket in that format since. Hopefully I can get some one day cricket in before the World Cup which might be hard but let’s see how it goes.

PP: You were dropped for the third Test against South Africa as coach Darren Lehmann felt that your pace was down and below 140kph. Do you feel that your pace is back up to where it was?

PS: Yes I think my pace was down. I think all the bowler’s pace was down. We’d had a long summer with the back to back Ashes and then went over to South Africa and there had been a hard game at Port Elizabeth and we were all very tired. I was disappointed with that but it was one of those things. A bit of a freshen up and a rest once I got home and then I went over to England to play some County cricket and now I feel good and comfortable. I feel I’ve got good rhythm and feel that I’m bowling well.

PP: Do you feel though that your pace and energy levels are back up to where they should be?

PS: The energy levels have never been an issue they’ve always been up there. It’s how I play my cricket, hard and fast and that’s the way I go about it. I’m feeling good, the body is feeling good and I’ll be right by the time October comes around.

PP: The injury list for Australian pace bowlers seems to be ever-growing. Do you think that increases the pressure on those of you who are actually fit?

PS: It does a little bit, but this is the best we’ve been for a long time. We can’t complain too much there are only three or four of us who are injured at the moment. That’s not a bad place for us as we usually have more than that injured. There are a couple of big injuries but we’ll be alright. Ryan Harris’ was more of a precautionary measure and James Pattinson we knew about. The rest of us are fit and strong so we should be ok at the right time.

PP: Your thoughts on bowling against Pakistan on those flat tracks in the UAE?

PS: There is no doubt that I’ve played on worse wickets before we even get over to UAE and actually see the wickets. India have over the years have produced some pretty poor wickets when we’ve played against them. I’m sure whatever gets produced in UAE, we’ll be prepared and ready for them.

The conditions in UAE will be home conditions for Pakistan so I expect it to be hard work and something we need to be ready for. It’s going to be a big challenge for not only our bowlers but also for our batsmen.

PP: The wickets in UAE and similar wickets present a tough challenge for pace bowlers. How do you prepare mentally and physically for such conditions?

PS: I don’t look at it that way. It doesn’t change anything for me. Bowling on any wicket is a challenge. It’s Test cricket, the toughest format at the highest level so you cannot expect it to be easy and not a challenge. It doesn’t matter if it’s a green seaming track or a flat deck. I’d expect the UAE tracks to offer less swing early on but reverse-swing will come into play later on so there are benefits for pace bowlers on such tracks.
If you bowl well enough as a team you can get the job done irrespective of the nature of the wicket. It’s something I’m looking forward to, we’ve not played Pakistan in a while and it’s going to be a good challenge.

PP: Who do you see as the key batsmen in the Pakistan Test side and potentially someone that you and your colleagues will target?

PS: It’s difficult to say as you don’t really know who your opponents could be and Pakistan is a team that tends to change its starting line-up a lot. There always lots of blokes coming in and coming out so you don’t know who you are going to come up against. However Misbah-ul-Haq has been around for a long time and he seems to hold the Pakistan innings together in that middle order so he’s someone who we will need to be ready for. We’ll target Misbah-ul-Haq as he’s likely to be Pakistan’s key batsman.

The conditions in UAE will be home conditions for Pakistan so I expect it to be hard work and something we need to be ready for. It’s going to be a big challenge for not only our bowlers but also for our batsmen.

PP: How useful is it that Muttiah Muralitharan is working with the team ahead of facing the Pakistani spinners?

PS: Some of the boys won’t have faced their spinners very often, but there are also a number of our batsmen who have played against their spinners which will help. But yes Murali being there is a great help and the boys will no doubt be facing him a lot in the nets ahead of the series against Pakistan. I’m sure he’ll have plenty of advice for us on the Pakistani spinners. We’ll be ready for the Pakistani spinners, don’t worry about that!

PP: You’re 29 now and some would say probably around your peak age as a pace bowler. Would you agree with that?

PS: Yes I think so. I definitely feel that I know a lot more about my game and how everything is going which is a good thing. As a cricketer you are always learning, but in the last couple of years I’ve learnt how to go about things a lot differently with my bowling. I’ve been a lot more controlled and learnt how to use my variations and been a lot more consistent which is a big bonus and I’m fit and strong so I think the Pakistan series is going to be a good start to a big summer. 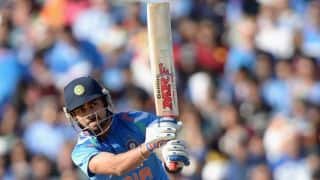