Peter Siddle: Eight facts you must know about the Australian workhorse

Peter Siddle: Eight facts you must know about the Australian workhorse

Having made his debut in 2008, Siddle has gone on to be a fixture in Australia’s Test side, and has become a reliable option.

Peter Siddle, born on November 25, 1984, is Australia’s “workhorse” in recent times. Having made his debut in 2008, Siddle has gone on to be a fixture in Australia’s Test side, and has become a reliable option. Nishad Pai Vaidya picks eight facts about the Victorian seamer.

1. First-Class debut against West Indians: In 2005, Siddle had made it through to the Victoria side. Having made his List A debut in October, he was handed a First-Class cap in November against the West Indians in a tour match. Devon Smith was his first wicket in First-Class cricket.

2. Entering Test cricket by hitting the helmet: Siddle became the 403rd player to don the Baggy Green. He made his debut in the second Test against India in Mohali in 2008. Given the new ball in the second over of the game, Siddle bowled it short and hit Gautam Gambhir on the helmet. That was some way of announcing his arrival on the world stage.

3. First wicket – Big wicket: Siddle had toiled hard for hours as Sachin Tendulkar and Sourav Ganguly put up a big partnership to rescue India. Off Siddle’s bowling, Tendulkar had moved along to become the highest run-scorer in history of Test cricket, beating Brian Lara’s tally of 11,953. However, Siddle had the last laugh as he denied Tendulkar a ton, having him caught behind for 88. Tendulkar became his first Test wicket!

4. Only bowler to take a Test hat-trick on birthday: On November 25, 2010, Siddle became the first man in the history of the game to take a Test hat-trick on his birthday. And, what a special day it was. The opening day of the Ashes 2010/11 in Brisbane saw an interesting tussle between bat and ball, until Siddle’s spell tilted the game in favour of the hosts. At 197 for four, Siddle had Alastair Cook caught behind for 67. Matt Prior was comprehensively beaten to be bowled off his first delivery and then Stuart Broad was hit plumb in front. Siddle finished with six for 54, his best Test figures as England were bowled out for 260.

5. One of two batsmen to score two fifties at No. 9 in a Test match: Siddle is quite a competitive batsman and can fight it out in the middle with his gritty approach. On a tough surface at the Feroz Shah Kotla, Delhi in 2013, Siddle hit fifties in each innings (51 and 50). Siddle became the first man to score two fifties while batting at No. 9 in a Test match. Bhuvneshwar Kumar has emulated him since, as he hit 58 and 63 not out against England at Trent Bridge, Nottingham in 2014.

6. The bunnies: Siddle has had the better of Englishmen Matt Prior and Kevin Pietersen. He has dismissed Prior 11 times and Pietersen 10 times in Test cricket. Both batsmen were dismissed by Siddle six times in the year 2013 alone.

7. The vegan: In 2012, Siddle made a conscious decision to give up all meat products and turned vegetarian. He decided to do it as his girlfriend had been a vegetarian. Siddle has dropped pace recently and some put it down to the fact that he does not eat meat products.

Bangladesh vs Zimbabwe 2014, 4th ODI at Dhaka: Bangladesh lose wickets in a heap 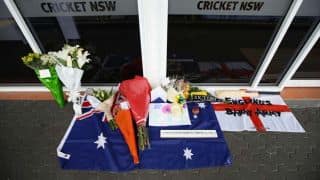