Arunabha Sengupta recounts the day when Philip Ring's family celebrated at Lord’s, one of those days which makes cricket much more than a simple sport.

In 2010 Philip Ring became a full member of MCC, thus becoming the first, and till date only, full member with Down syndrome in the august cricketing body. Arunabha Sengupta recounts the day when his family celebrated at Lord’s, one of those days which makes cricket much more than a simple sport.

Philip Ring’s face tells us that he is enjoying himself.

The annual Gold Bats vs Sherlockians match is on at the West Wycombe Cricket Ground, that quaint cricket encounter that takes place every year where the players diligently follow the 1895 rules. Philip, the son of the renowned Wodehouse scholar Tony Ring, is there as usual, not willing to miss a single ball.

From time to time he peers at the scoreboard. When something amusing catches his eye, he observes “Oh dear!” The delight is childlike, the enjoyment pristine. He enjoys the cricket, enjoys the picnic lunch prepared by his mother Elaine, and the tea-time cakes. But then, Elaine Ring’s picnic lunches and cakes are legendary.

Personally, Philip is equally partial towards football. He supports Arsenal, reads the publications about the sport and his club, and attends the key matches. The football scores are simpler, and hence he finds it an easier sport to follow. Cricket, with runs, wickets, overs and the individual scores and figures of each participant, is rather complicated.

You see, Philip has Down syndrome. For the uninitiated, it is a genetic disorder associated with physical growth delays and mild to moderate intellectual disability. The facial features are characteristic, and readily recognisable.

One can perhaps say that the people with Down syndrome are destined for a life of childhood.

But, the lives they lead can be rewarding as well, and Philip is a shining example of the same.

Not only is Philip a dedicated Arsenal fan who enjoys watching cricket as well, his association with sports goes way beyond that. He is a member of the Arsenal Disabled Supporters’ Club, and also enjoys watching his local Football League team, Wycombe Wanderers. He has attended tennis matches at Wimbledon as well. And he has visited New Zealand with MCC members, during the 2002 England tour. That had been a fascinating experience, where he had engaged in conversation with Ian Botham and had his arms round Ted Dexter.

Yes, Philip had approached Botham all by himself, with the words, “Hello Mr Botham, my name is Philip.” And he had proceeded to have a memorable exchange with the great all-rounder.

But life for Philip is not all fun and games. He works regularly, two days a week. He has done it for many, many years. First, he used to work for Paddock’s Hospital. For the past 17 years he has worked at the Tesco’s at Princes Risborough. On two other days, he volunteers at the local Helen and Douglas House Charity Shop.

He does take time off to watch matches at Lord’s, though. Philip can do that, being a full member of MCC. In fact, he is the first full member with Down syndrome. And therein lies one of those stories associated with cricket that make it the game it is.

Tony Ring, an MCC member himself, had applied for Philip’s membership in 1991 when the latter had turned 18. He spent 11 years on the waiting list before becoming an Associate Member in 2001.

Eight years down the line, in 2010, Philip was made a full member by MCC — an indication of the increasing inclusiveness of the and exclusive cricketing body.

It was obviously an occasion to celebrate for the family. Arrangements were made to have a party in the President’s Box in the Grand Stand of Lord’s.

It was a match day, May 2, 2010. Middlesex were playing Essex in the Clydesdale Bank 40 tournament. That worked well, because Philip had for long been an Essex supporter.

Invitations had been extended to attend the private party while watching the game. Among the 35 guests were neighbours who were members of MCC. There was David Haddock, Philip’s first Headmaster at Heritage House School in Chesham. There was also Dr Michael Streule, the GP who cared for him till he was 18, before Philip went off to Lufton Manor College in Yeovil. There was also Lorna Hogg, Philip’s girlfriend, who had come in with one of the carers of Philip’s house in Princes Risborough.

Unfortunately, weather intervened and there could be no cricket that day. The guests turned their attention to the lavish picnic prepared by Philip’s family.

And then there was the great surprise of the day.

In walked four Essex stalwarts. Grant Flower, James Foster, Graham Napier and the one and only Alastair Cook. Philip was presented with an Essex bat signed by the team. And as Flower, Napier and Cook looked on, Foster presented him with the MCC cap.

It was a momentous occasion, not least because Cook was officially the captain of England at that time. He had led the side in their last Test series in Bangladesh that March, with Andrew Strauss deciding to sit out.

The four cricketers stayed in the party for more than half an hour, chatting to Phillip and mingling with the guests.

That was not all. There was another surprise, this one from the Club chefs. A magnificent chocolate cake was presented, resembling one of the MCC yearbooks.

There was no cricket that day, but the guests enjoyed themselves to the hilt. And so did the man of the hour. As the family returned to their home in Great Missenden, Philip observed, “This is the best day of my life.”

Cricket … well … it touches every corner and every heart…

Arunabha Sengupta is a cricket historian. He writes about the history of cricket, with occasional statistical pieces and reflections on the modern game. He is also the author of four novels, the most recent being Sherlock Holmes and the Birth of The Ashes. He tweets @senantix
First Published on August 7, 2017 5:48 PM IST
Last updated on August 7, 2017 10:34 PM IST
TOPICS:
Alastair Cook England Ian Botham Lords MCC philip ring 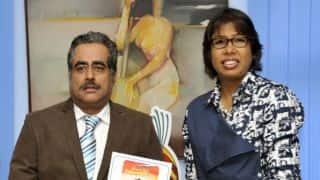 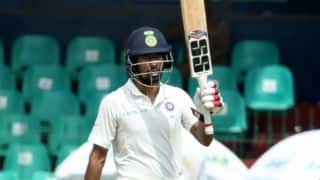