They had planned a surprise for Phillip Hughes on the other side of the pearly gates on his 26th birthday.

They had planned a surprise for Phillip Hughes on the other side of the pearly gates on his 26th birthday. Abhishek Mukherjee describes it in detail.

The tall frame waited on one of the chairs assembled around the table. Had they turned the light on, they could have seen thehandsomeface, winner of many a battle on the ground — and even the real thing. He could dodge a Messerschmitt up the arse and win over amuch-coveted city belle with equal ease.

Another man entered. Miller looked up, and broke into the familiar smile that had won many a female heart in both England and Australia. “Everything ready?” he asked, taking a swig from the bottle.

Hassett nodded. While Miller and his great mate Lindwall had been terrorising the Englishmen and having a hearty laugh out of it as per Bradman’s orders, Hassett had managed to remain away from the ruthlessness. Hassett was second to few when it came to batting or leading a champion side, but was also the ubiquitous prankster. Few men evoked as much joy with their presence.

Lindwall joined the duo, as did Barnes. Though he got the first share of cherry, outside the field they were always Miller and Lindwall, never Lindwall and Miller. Miller was happy to see him.Then he saw Barnes enter the room, carrying a suspiciously large box.

Barnes was another matter. Appointed twelfth man for New South Wales, Barnes had walked out to serve drinks in a grey suit and dark glasses, a towel folded over an arm, a portable radio in the other, and escorted by a steward; he sold the players cigars and chocolates; combed Miller’s hair with a mirror held up in front of him; brushed everyone’s clothes; and sprayed deodorant on everyone. He was simply not going to let this opportunity go.

“Where are the others?” Hassett asked. The four men of mischief had already accumulated around the table, taking deep puffs at cigars. The champagne lay silently in the ice-bucket on the table, tiny droplets rolling down its gleaming surface.

Miller snapped: “Aw, come on, he is still a baby!”

Lindwall argued: “He was a teenager when he took the boat with us. He is not a baby now!”

Miller and Hassett exchanged looks. Hassett sighed: “For us, he will always remain a baby.”

Barnes opened the box and fidgeted around with the contents. “Neil and Arthur will not be here, but where are the others? Most importantly, where is He?”

“I think He will come turn up at the last moment,” Miller said. “Big man, you see.”

“Tiger and Fingo would have loved that tone,” the immaculate Tallon said as a group entered. It was a Who’s Who of Australian cricket: Tallon, the man Bradman had called the greatest gloveman he had seen; Saggers, his livewire deputy behind the stumps; the bright-eyed Johnson, the man who succeeded Hassett at the helm; and the no-nonsense Johnston, the Master of All Trades with the ball.

Holding up the rear was Toshack. Barnes looked at him enviously before staring at Miller. Toshack was easily the most glamorous and suave of the lot. With his tall frame, rugged features, unkempt hair and an outstanding sense of humour, he was probably the closest to a film star of the lot. His mates called him The Black Prince; even Miller came a distant second in comparison.

Hassett flicked the lights on. The mischievous eyes of Ring came into prominence near the door. Johnston smiled at Ring; they had fond memories as roommates despite their keen battle for a single spot in the side. “Thirty-eight to victory,” Ring mouthed. Johnston smiled back. It was their usual greeting message.

The murmur now turned into chatter, what with Miller, Hassett, and Barnes all around. They fondly recollected their glory days, of their famous journey through England,of the ridiculous ease with which Lindwall had run through England on that morning at The Oval, of the Headingley chase, of Bradman’s last innings, of Compton and Hutton. The topic then shifted to the 729 against Essex, at which time Miller pretended not to hear and duck out.

Slowly the others started coming in. The elegant, livewire Brown; Hamence, humming one of those tunes; the sombre Loxton; and the sturdy yet mysterious McCool: they were all there. Everyone was there. Everyone, but Harvey and Morris; and, of course, Him.

The men in the room stood up in anticipation, looking at the door. Even Barnes looked sombre. The great man entered — he of the 99.94 fame. He was smiling. His right hand was placed softly on the back of a youngster. The kid (you could almost call him that) was looking at the legend in awe. Hassett walked up to them.

“No,” Bradman responded. “That can follow. I know it is his birthday, but let us be done with the rituals first. The celebrations can follow.”

So they walked up to him, forming a semicircle. The Don sounded uneasy: “Sam, will you?”

Loxton knew it had to be him. The Don was the undisputed leader, but he, Loxton, was the greatest speaker of them all. Why, he had also been a member of the Victorian Legislative Assembly! His views on the sport were also very clear: he had, after all, quit cricket administration following the underarm incident.

“Phil Hughes,” announced Sam Loxton. “We were unvanquished on a full tour of England, and remain the only team to do so. We thought our feat will remain unparalleled in the history of the noblest of all sports, but you have managed to surpass us. In death you have made the greatest of them all bow in front of you. You are hereby inducted as the first honorary member of The Invincibles.”

“I second that,” said Don Bradman.

And the champagne was uncorked.

Far, far away, in a parallel world, thousands of ignorant lovers of the sport mourned a twenty-sixth birthday. 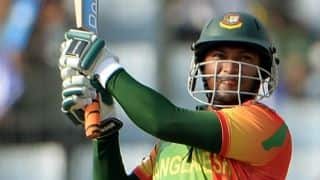 Phillip Hughes officially "63 not out" after Cricket Australia amends scorecard