Hughes died after being hit by a Sean Abbott bouncer during a Sheffield Shield match.

The cricket fraternity mourned over Phillip Hughes’ unexpected demise. The media, however, had to work on, and it was not until a few hours had passed by that the news sunk in. Sudatta Mukherjee puts to words the enormity of the shock.

In life, you come across people who touch you and change the path of your existence. And then, there are some you have never met, have never come across, and yet you remember every day; you fight for them; you admire them; and love them unconditionally.

When you are a woman and tend to follow cricket closely or cover it, there will be moments when you develop a certain kind of weakness for few male cricketers. Oh well, there goes my secret.

My support for the Australian cricket team dates back to at least 2003. I remember I was mocked and scolded for being an Indian and supporting Australia in the World Cup final. Years have passed by, but the love and support for the men in yellow never faded.

There have been cricketers who had ignited my passion and love for cricket. There had been the likes of Glenn McGrath, Steve Waugh, Ricky Ponting, and Brett Lee. However, over the past few years, with the Australian team trying to find their way back after defeats against South Africa and England, the affection was restricted to the new crop.

Philip Joel Hughes was one of them.

My affection for Hughes had no valid reason. My desk boasts of a picture of Yoda; Nick Compton sits next to him, smiling back smugly at me (I still feel his opening partnerships with Alastair Cook is unmatchable in Tests, but then we believe a lot of stuff).

The feeling for Hughes has always been a secret. Why? Because there was no reason. I needed reasons to like and fight for him.

During Ashes 2013 series, I was more ecstatic to see Hughes score a gritty 81 not out than to rejoice in Ashton Agar’s 98. As the series continued and came to a conclusion, I had to subtly put a point forward why Hughes needed to play more regardless of the fact that he was vulnerable to the short ball. I did. I was happy.

Months went by and Australia regained the Ashes 2013-14. Everyone forgot about the country boy.

Then Australia were flying South Africa soon. They would be playing the best side at their den. They would be up against Dale Steyn and Vernon Philander and Morne Morkel. Shaun Marsh, who was selected for the tour pulled out later due to calf injury.

It was the perfect opportunity for the 25-year-old to mark his return. Once again, the weak heart sat down to write why Hughesy should be selected for the tour, given the fact that he had a very good South Africa tour the last time the Australian visited the side.

But they picked Marsh. He put up a good show. Hughes seemed to be a forgotten man. And then November 25 happened.

When the news of Hughes getting hit came in, I remained calm and had a strong belief that everything will be fine.

It was just another day at office and then suddenly the news broke. A colleague, presumably shocked, put across those four dreaded words in sombre tones: “Phil Hughes is dead.”

News had to go up. Proceedings had to be proper. Videos had to be uploaded. Profession had to override emotions. The next five hours or so were spent by managing the work and then suddenly, the feeling sunk in.

He is no more.

What does it feel like when someone you admire disappears for good, and you are never able to express the love and fondness for that person? A void is created, which is eventually healed by time, that greatest of all healers.

How much time will it take me?

I will always remember Hughes as an Australian cricketer, who I genuinely felt could have gone on to become a superstar, despite his shortcomings; and for the jewel of a heart he had.

MacKenzie McHale of The Newsroom sometimes makes me dream to produce news shows. When the news broke this morning and someone needed to help the editor in helping him to produce a special video on Hughes’ demise, it had to be me.

Ironically, it was Hughes who fulfilled my dream. But what a cost I had to pay!

Some dreams are better left unfulfilled.

(Sudatta Mukherjee is a reporter with CricLife. Other than writing on cricket, she spends penning random thoughts on her blog. When she is not writing, you will catch her at a movie theatre or watching some English television show on her laptop. Her Twitter id is @blackrosegal) 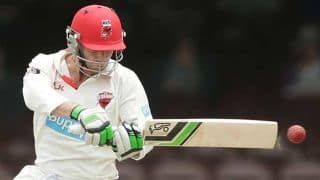