Since 2007, 23-year-old Umar Amin has been one of the most talked-about middle-order batsmen in Pakistan. 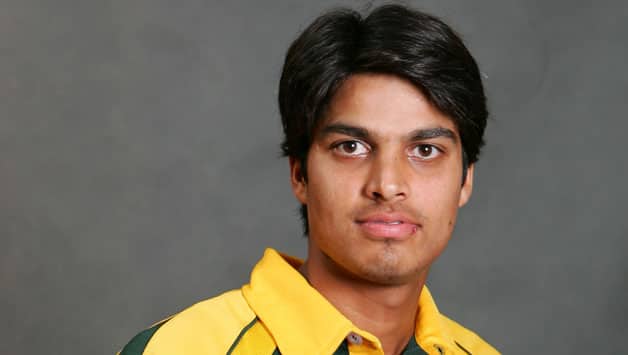 “I was delighted and also relieved to see my name in the squad,” says Pakistan’s Umar Amin © Getty Images

Since 2007, 23-year-old Umar Amin has been one of the most talked-about middle-order batsmen in Pakistan. A classy left-hander known for his impeccable timing, Amin made his international debut in the 2010 Asia Cup but scored just 34 runs from three innings. Later in the same year he made his Test debut during the ill-fated tour of England where he finished with an average of 12 from the four Tests he played against Australia and England.

Exhibiting consistency in domestic cricket, Amin has an excellent record in this season’s President’s Trophy – he’s the leading run-getter and also posted the highest individual score of 281 – coupled with a solid showing in the Faysal Bank T20 tournament and has now earned a call-up to the Pakistan squad for the upcoming T20 series in India.

In an exclusive interview with Saj Sadiq of Pakpassion.net , Amin talks about the 2010 tour of England, his improvement as a cricketer, experience of playing league cricket in Lancashire and thoughts on the upcoming tour of India later this month.

PakPassion.net (PPN): First and foremost, congratulations on your call up to the T20 squad for the upcoming series in India.

Umar Amin (UA): Many thanks to you, PakPassion and all of my fans around the world. It’s great to be back.

PPN: How did it feel to see your name included in the T20 squad?

UA: I was delighted and also relieved to see my name in the squad. I’m making my international comeback after two years and I’m really looking forward to the training camp, working with all of the coaches in Lahore, the pre-tour build-up and the series itself in India.

PPN: You mentioned that you are returning to international cricket after two years. Looking back to the summer of 2010 in England when you were 20 years of age and playing the four Test matches — two against Australia and another two against England — on a difficult tour, what are the lasting thoughts of that summer?

UA: Looking back on that tour I wasn’t a very mature cricketer then. In the subsequent two years I have learnt a lot about cricket, myself and about my strengths and weaknesses as a cricketer. As difficult a tour as it was in England, I still believe I learnt a lot from that tour and took many positives from that summer. I feel that I’m a better all-round cricketer now compared to 2010 and I definitely believe it’s time to look to the future. I always look to continue improving as a cricketer.

PPN: You were subsequently dropped after playing four Test matches in England. That must have been disappointing for you, particularly given that conditions were so tough and you were a newcomer to international cricket?

UA: I don’t want to make any excuses at all. I was given eight innings to prove myself in England which was ample time. I didn’t perform as well as I should have in England and that was my fault, nobody else’s. I entirely take the blame for that, I should have done a lot better in England in 2010 despite the unfamiliar conditions. It would be easy to make excuses, but I look back and admit that I didn’t perform as well as I was capable of performing.

PPN: Mohammad Asif, Salman Butt and Mohammad Aamer were international teammates of yours in 2010 and at National Bank. What occurred in 2010 and what eventually came out must have been very difficult to comprehend for a young cricketer like yourself?

UA: It hurt me, it hurt the whole squad, it hurt Pakistani cricket lovers and it hurt the image of Pakistan. It was very damaging for the reputation of Pakistan cricket and it was shocking. Of course we all wish that nothing of the sort would have occurred but sadly we cannot change the past. Having said that though, we as a group of cricketers and as a nation need to move on from that, learn from what happened, move forward and give Pakistan cricket a good name around the globe — build its reputation.

PPN: After being dropped by the selectors you obviously went away and performed well in domestic cricket, but in addition you played some league cricket in Lancashire this year too. How was that experience?

UA: Cold, very cold! I was in England this year in Morecambe, Lancashire, for nearly six months. It was a fantastic experience both on and off the field. The club really looked after me and made me feel very welcome and I had some really good times at Morecambe.

I was living on my own and with that came the responsibility which you take with you onto the cricket field. But by the end of the summer, I was really looking forward to my mother’s cooking after months of tasting my own culinary delights!

PPN: Apart from improving your abilities in the kitchen, what did you find most useful about your spell in English club cricket this year?

UA: The key word is responsibility. As an overseas cricket professional the team is heavily reliant upon your performance with both bat and ball. So every week you are expected to perform well, expected to put in the performances and carry the team.

The club teams in league cricket in the UK have high hopes from their overseas signings and there’s a lot of pressure on you to perform every week. If, as an overseas professional, you don’t perform it means your team will struggle that week. I really enjoyed the experience and would definitely recommend it to any overseas cricketer who wants to play in conditions that are different to back home and is looking to improve his game.

PPN: You spoke earlier about being a better all-round cricketer now than you were in 2010. What areas of your game have you worked upon and feel you have improved upon?

UA: One of the problems I had with my batting was with my balance at the crease. I’ve worked on that issue and now I feel that my balance is better when I’m playing a shot, whether on the front or back foot. It was a technical issue that needed addressing and it was affecting my batting at key times. I worked on this issue with my coaches and I feel a lot more composed and better balanced at the crease now.

Also I feel that I’ve made some improvements on my mental toughness. I definitely feel that, mentally, I am a lot stronger nowadays compared to my early days as a First-Class cricketer and also compared to 2010.

Fitness is another area of my game that has certainly improved in the last 12 months. All of these things have been improved upon and when you put them together I feel that I’m a far better cricketer than what I was a couple of years ago.

PPN: There are some cricket observers who state that your technique and style of batting is more suited to Test cricket rather than the shorter formats. Do you think that is a fair assessment?

UA: No, I disagree. I hear what people are saying and they are entitled to their opinions, but I have all the shots and I feel that I can be a success in all three formats. Recently, I played for Rawalpindi in the Faysal Bank T20 Cup and performed well during that tournament. If people watch my innings in the Faysal Bank T20 then they will realise that I am not a batsman who is just suited to Test cricket.

PPN: Please provide us with your thoughts on the recently concluded Faysal Bank T20 Cup. There was a lot of cricket crammed into only nine days which must have been demanding on the players.

UA: Absolutely, and that’s when physical fitness comes into play. We played six matches in the space of six or seven days and it was very demanding especially as the timings of the matches were different every day. But, overall, I really enjoyed the tournament; it was a very competitive tournament and the cricket was of a very good standard. It’s just a shame that Rawalpindi could not reach the semi-finals.

PPN: You moved from National Bank to Port Qasim Authority this season in four-day cricket. What were the reasons behind the move?

UA: That was down to Rashid Latif. He wanted me to play for Port Qasim Authority (PQA) and asked me to sign for them. I’d been playing for National Bank for five seasons and it was a difficult decision to make to leave them but in the end it was Rashid Latif who managed to persuade me to sign for them. It’s worked out well as I had a decent season for PQA and with that has come a return to international cricket.

PPN: There seemed to be a good blend of youth and experience at PQA. How do you feel the season went there?

UA: Yes, that’s correct. The squad has a very good blend of youth and experience and the best thing was that I’ve played alongside all of my teammates at various levels of cricket, be it domestic cricket or on ‘A’ tours or academy tours, so it was very easy to settle in at my new team.

PPN: Moving onto the tour of India where you have been included for the T20Is. You must be very excited at the prospect of playing in India?

UA: I’ve never toured India at any level and, yes, I’m very excited at the prospect of playing cricket in India — it should be a fantastic experience. We want to go there not just to make up the numbers, but to defeat the Indians on their home ground. It’s been a long time since Pakistan and India have played a series against each other and it’s fantastic for the fans and the players that the two Asian rivals are coming face to face in a cricket series. The excitement is building already in the fans and the players.

PPN: You find yourself in the T20 squad, but surely the dream is to regain a place in the Pakistan Test side?

UA: Very true. Test cricket is the pinnacle for any cricketer and my dream is to regain my place in the Pakistan Test side, but not only that — I want to play for Pakistan in all three formats. However, one step at a time, let’s focus on the tour of India and T20 cricket for now and see how that develops before thinking too far ahead.

UA: It’s very important to have the right blend in any team and in any squad. There are some great cricketers in both squads chosen by the selectors and, as a young cricketer, I will be looking to learn from and get guidance from my senior colleagues.

I always believe that the more top-level cricket you can play at a young age, the better it is for you in the long run.

PPN: Thanks for your time today, Umar, and best of luck in India.