Politics gets a "free-hit" in the name of cricket diplomacy

Politics gets a "free-hit" in the name of cricket diplomacy

A decade back it was always about measuring the country's & the team's performance Pakistan.

All right. It’s just a game! The Prime Minister of one country invites the President of another to watch the match. It’s supposedly cricket diplomacy. Manmohan Singh, apparently, doesn’t even like the game. So the media will be looking and analysing each twitch of the eye, each gesture of these two leaders, the security personnel stretched even further – which also means more hardship on the ordinary spectator – and they will be playing the National Anthems of these two countries at the beginning of the game. Yeah, it’s just another game.

One believes that Mahendra Singh Dhoni and this Indian team will take it only as another game – a game that India needs to win to continue pursuing their dream of winning this World Cup. India has moved on as a nation and a cricket team beyond the erstwhile short-sighted Pakistan focus. Both have bigger battles to fight and are concentrating on longer term issues – and rightfully so. A decade back it was always about measuring the country’s and the team’s performance vis-a-vis Pakistan. It isn’t now. When Yuvraj Singh said after the Australia match that he had thought of beating Australia every day in the last one year and his pretty understated statement on the upcoming Pakistan match, it wasn’t diplomacy. It actually showed what this team’s priorities are. Frankly the priority is to be the #1 in the World. And it’s not about just beating Pakistan.

One has been hearing of people talking about how Indians will never forgive the team for losing to Pakistan; even losing the final does not matter so much. Will this Indian team think and put pressure on itself by thinking that way. From the public personae of Gary Kirsten and Dhoni, it doesn’t seem likely. It’s either rabid hate mongering or equally nauseating ‘it’s just another game’ peaceniks that are writing/ talking in the media.

What Manmohan Singh has done is to put enormous pressure on both teams with these silly diplomatic overtures that is far more than what those effigy-burning, stone-throwing idiots put. Imran Khan, for once, was right when he claimed that it wouldn’t impact any thing at all. Why does one want to induce that added edge on players’ of both teams?  It could have been just another match, but once you actually go and mix politics in sport, Dr. Singh, it doesn’t remain that. 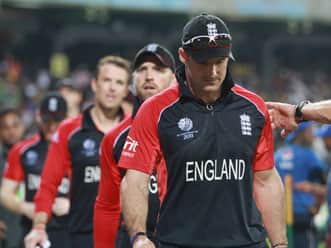