The pressure of chasing a large second innings total 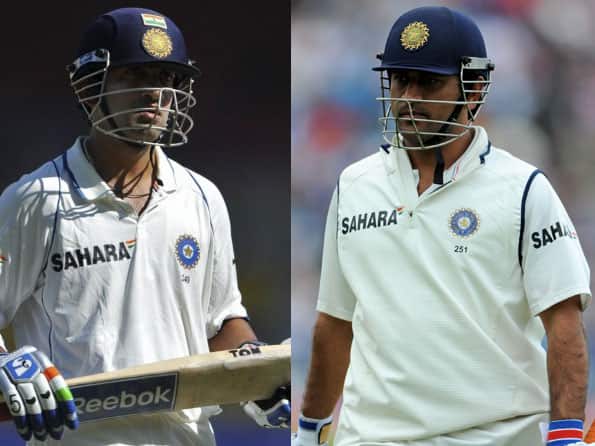 Gautam Gambhir (left) & MS Dhoni…The left-handed opener has struggled to find his feet in the Australian conditions, while the India captain has come in for a lot of criticism for being defensive © Getty Images

The first Test just proved what everyone knew about India in overseas conditions: the fact that we are poor starters, the batsman struggle to acclimatise quickly and that we are almost incapable of wrapping up the tail quickly. After three days of riveting Test cricket, Team India gave up without a fight to hand Australia a comprehensive win.

One of the first changes that need to be brought in is getting in Rohit Sharma in place of Virat Kohli. Kohli has looked very shaky in the face of some good pace bowling, and his attitude when given out leg before definitely deserves censure. Rohit’s technique, current form and the fact that he has played in Australia before, should prop up the middle-order. It might also be fruitful to have him play before VVS Laxman in the batting order, so he gets the benefit of playing with two “very very special” giants of the game.

Mahendra Singh Dhoni’s captaincy has come in for a lot of criticism for being defensive and not adapting to the conditions quickly. Dhoni has this tendency of spreading the field for the tailenders, the moment one of them begins to flash his blade and gets a couple of lucky boundaries. That said, the Australian tail of Peter Siddle, James Pattinson and Ben Hilfenhaus, showed better technique than some of the frontline Indian batsman. With Umesh Yadav on fire and Ishant Sharma generating some serious pace, to bowl the fastest ball ever by an Indian bowler (move over Varun Aaron), it at least beckons a forward short-leg and a few well-directed bouncers.

With Gautam Gambhir completely “edgy”, the pressure of getting a good start falls on Virender Sehwag. While that might not affect the way he plays, his early dismissal almost ensures a low total for India, as was evident in the second innings. As in England, Dhoni’s dismal batting record, in conditions which do not resemble the subcontinent, means India’s tail actually starts with him.

Finally, more often that not, the pressure of chasing a large second innings total, invariably gets the better of any team batting second. This is precisely why, the batsmen need to rise from the ashes and ensure they do not squander a perfectly good start like the one India had in the first innings. For inspiration, the team does not need to look any further than their southern neighbours in Sri Lanka who, despite all the insecurities at home, payment crisis and internal turmoil, chalked up a memorable win against South Africa. Australia have knocked India down in the Boxing Day Test to take the first round. It’s now up to the team to pick themselves back up to deliver the knockout punch.