Pragyan Ojha: 13 things to know about the Indian spinner

Pragyan Ojha: 13 things to know about the Indian spinner

Pragyan Ojha strength lies in the flight that he gives to a ball and happens to be the only cricketer from Hyderabad to represent India in all three formats of the game.

Born September 5, 1986, Pragyan Ojha is an Indian cricketer who bowls slow left-arm orthodox. His strength lies in the flight that he gives to a ball and happens to be the only cricketer from Hyderabad to represent India in all three formats of the game. In his short span of Test career, he has taken seven five wicket-haul in an innings and one 10-wicket haul in a match. On his 29th birthday, Abhishek Kumar looks at 13 interesting facts about the consistent performer.

1. Inspiration: A fan of former Indian left-arm orthodox bowler Venkatapathy Raju, Ojha was lucky to be groomed by him in his early stages of his career.

2. Making an impact on Test debut: Ojha made a good start to his Test career. Playing against Sri Lanka at Kanpur, Ojha starred in a huge victory for India in 2009. He bowled 38.3 overs, gave away 73 runs and picked up four wickets.

After proving to be a good bet in Test cricket, Ojha with 21 wickets went on to win the Purple Cap in the third season of the IPL in 2010. In the year prior, he was a part of the Deccan Chargers outfit that won the IPL.

It was the last Test of spin legend Muttiah Muralitharan and he needed eight wickets to complete his 800 wickets, which he took in the Test against India at Galle in 2010. Ojha was his last victim and in both the innings, Mahela Jayawardene caught him and the bowler was Murali. As it was the last wicket of India s innings, Murali had a rare distinction of being a bowler to have claimed a wicket off his last ball in Test cricket.

5. County cricket: Just after two years of appearance in international cricket, Ojha was signed to play for Surrey in 2011 for the final few weeks. He took 24 wickets in four matches, which helped his team getting promoted to Division One of the LV County Championship.

6. Winning it with Laxman

VVS Laxman happens to be another of Ojha s mentors. In a Test against Australia in 2010, India snatched a victory from the jaws of defeat and Laxman architected that. There was a moment when the very calm Laxman lost his cool on his state mate. The incident happened when Ishant Sharma after a brilliant partnership with Laxman got out with just 11 runs remaining to win the match and Ojha walked in as the last man. Laxman hit the ball to mid-off and called for a single but Ojha denied which led to Laxman losing his calm and blasting Ojha. However, a lot of celebrations were in store for later as Ojha supported Laxman with an unbeaten 5 and India pulled off the thriller by a wicket.

7. Part of winning Teams in IPL: So far, Ojha has played for two teams in IPL and has got the chance to hold the winning trophy three times. He tasted his maiden IPL triumph in 2009 with Deccan Chargers and later won twice in 2013 and 2015 with Mumbai Indians.

8. Consistent but not regular: The 29-year-old cricketer from Hyderabad has a decent Test and ODI record but has only managed to make sporadic appearances in the last seven years. He has 113 wickets at 30.26 from 24 Tests and 21 wickets at 31.04 from 18 ODIs.

9. Face of Peta: Ojha is an animal lover and is one of the faces of People for Ethical Treatment of Animals (PETA). Ojha recently figured as a caged tiger in one of the latest advertisement by PETA.

10. Dropped after a Man-of-the-Match award

Ojha can consider himself as one of the unluckiest cricketers. Fans remember the Wankhede Test against West Indies in 2013 as Sachin Tendulkar s last Test but Ojha picked his maiden 10 wicket-haul in a match in that Test and won the Man-of-the-Match award. Surprisingly, he was dropped from the side for the tours that followed and it remains his last international outing for India.

11. Troubles over action: Ojha was banned from bowling in competitive cricket in December 2014 after his action was found to be illegal. He got it cleared later and made a comeback in cricket in January 2015. Despite spending most of the IPL 2015 on the bench, he proved a point in July. Playing for India A, he picked a fifer against the touring Australia A and is now back in contention for national selection.

12. Couldn’t say no to Sourav Ganguly

Earlier this year, Indian cricket great Sourav Ganguly approached Ojha to play for Bengal in 2015 Ranji Trophy. Ojha couldn t let this offer go and agreed to it admitting that he couldn t say no to someone like Ganguly. After years of toil with Hyderabad, Ojha appeared for Bengal in 2015 and 2016 seasons.

13. Controversy with Bengal: After Hyderabad were promoted from lower division, Ojha wanted to return to his home but the Ganguly-led Bengal administration denied his request. He wanted a release but we have not given him. Bengal signed him when Hyderabad were in Plate. We need his service, and how can he leave us now. Ganguly said. 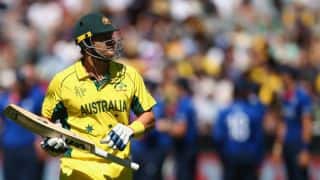 POLL: Who will win the England vs Australia 2nd ODI?