Unlike the Ashes, the ODIs are likely to be a hard-fought series with Australia walking in with much more confidence than the hosts. Abhijit Banare analyses the key players and strengths of both teams. 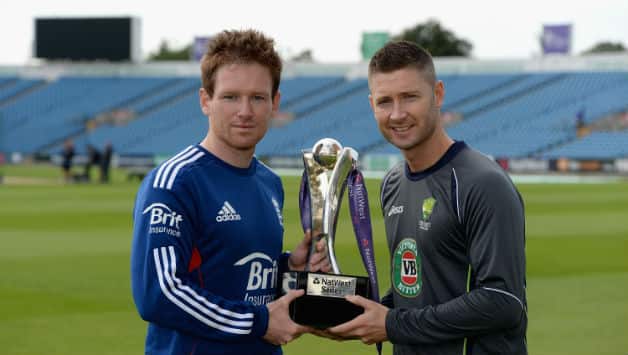 Both teams have a balanced side with a mix of experience and young players. It’s expected to be a keenly contested series unlike the Ashes where England were a much better team © Getty Images

Unlike the Ashes, the ODIs are likely to be a hard-fought series with Australia walking in with much more confidence than the hosts. Abhijit Banare analyses the key players and strengths of both teams.

Australia and England have refreshed their squads with new faces as the the two teams begin the five-match One-Day International (ODI) series at Leeds. Ahead of the series, both England and Australia faced weaker opponents to check their team strength. While it took two Irishmen to script a victory for England, Australia were powered by their Finch-hitter, or Aaron Finch to the uninitiated, who continued from his Twenty20 record to smashing Scotland all around. The pundits had placed their money on England to dominate the Ashes, but the 50-over version might just be more engaging with stiff competition between the two sides.

In contrast to the Test series where the results were shaped by the bowlers from both teams, the ODI series, sans key pacers and presence of hard-hitting batsmen, will be more about the batting firepower. Below is a brief analysis of the teams and their key players:

For England there’s no immense pressure unlike Australia to clinch the series. The is evident from the young team chosen by Geoff Miller , the chief selector. The youngsters in the team are coupled with experienced batsmen like Jonathan Trott and Kevin Pietersen. While the batting does show a great picture, the bowling could be a touch weaker without enough experience. Irishman Boyd Rankin who picked four in the game against Ireland, will be keen to make further inroads and settle in the team.

Eoin Morgan: A Test cap at stake, captaincy under scrutiny, runs to be scored to regain form; if there was one player who has a lot to be concerned than others, it has to be Eoin Morgan. The ton against Ireland would have boosted his confidence and will be raring to continue his good nick.

Boyd Rankin: The lanky Irish pacer was clearly one of the most effective bowlers against his country of origin, Ireland. His height does give him an advantage over the batsmen.

Kevin Pietersen: Yes, he’s back in the ODI fold. Along with Trott, England have a great combination of experienced players to stabilise the team.

Ravi Bopara: It would not be unfair to label Bopara as the Rohit Sharma of England — filled with abilities but hardly used to the best. Similar to Morgan, Bopara’s success will also impact on his selection for the Ashes ahead. In ODIs, he has been the best all-rounder, especially being handy with the ball.

In contrast to England, Australia are all geared up to improve and erase the bitter experience of the Ashes. On paper, Australia are better than their opponents and this is the best opportunity to dominate England. Even in this squad there are a few players for whom this series is important from the return Ashes point of view. Australia are starving for victory. A win at Leeds will give the much needed push to fight more.

Aaron Finch: Finch’s recent blitzkriegs with the bat can easily remind you of India’s Shikhar Dhawan. Sometimes, things just can’t go wrong whatever be the situation. After the record innings of 156 against England in a T20I, the power-hitter smashed 148 against Scotland in an ODI. For the next five matches, Finch will have a clear license to go and play his game without any worry of being dropped after few bad performances. At least that’s one of the incentives of starting the season with a bang.

Shaun Marsh: He is among the players who will have a compelling reason to emerge successful. It will undoubtedly seep in to increase his chances of being in the whites. A spot in the Test team, where none except Michael Clarke is certain about their place, is what Marsh would be targeting and would be keen to prove a point.

James Faulkner: If Faulkner is the Most Valuable Player in a T20 format, his value in the 50-over game is nothing less. Apart from Shane Watson, Faulkner can be another lethal weapon who can contribute immensely with bat and ball.

Mitchell Johnson: Since he has not been in the spotlight, many would underestimate his abilities going into the series. But the left-arm pacer can prove to be an asset. The absence from Ashes squad despite being fine form had raised a few ripples, but the ODI series is a big platform for the pacer to find favour similar to Marsh.

In all probability the spectators are most likely to cheer for their home lad Joe Root who returns to the fold after last playing against New Zealand prior to the ICC Champions Trophy.

Looking at the overall strength, Australia won’t mind chasing stiff targets through the series as they boast of good hitters, including Finch and Marsh at the top and Shane Watson down the order. The middle-order has the serene presence of Michael Clarke and George Bailey; Australia have much to be positive about.

It will be the 38th ODI at Headingley. The two teams have played each other on four occasions with both teams on two wins each.

Australia haven't been as consistent as they would've liked: Michael Clarke

Mark Ramprakash: Elegant, prolific and supremely talented – unfortunately not in the international arena