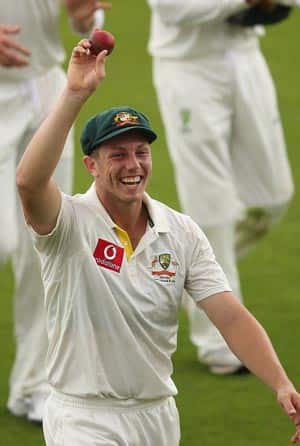 Recent promising individual displays such as James Pattinson’s five-for against New Zealand suggest that we have plenty of talent in our system; the challenge will be to nurture and train this talent © Getty Images

Matthew Hayden said recently that it takes 10-15 years to produce an iconic player. Great players develop over time and they don’t come around every day, even every era. It also takes time to produce good teams, let alone great ones.

In this modern world, where everything is so accessible, we expect instant gratification. The virtue of patience is dwindling and our tolerance levels seem to be declining. Whilst the Australian tall poppy syndrome has always been a terrible shame, it seems to be stronger than ever. One day a hero, the next a villain, it seems the fickle nature of expectation is alive and well. It was not that long ago that Phil Hughes, the teenage kid from the country, was being hailed as the next big thing of Australian cricket. His inclusion in the Test team ignited passion and excitement throughout cricket circles. Now, and even though he has scored three Test centuries and 17 first-class ones since, he seems to be written off by almost everyone who has any stake in the game. We must not forget he is still only 23. His future is unbelievably bright; isn’t it?

A challenge facing this current Australian cricket team is that it’s without doubt in a rebuilding phase. Much as I dislike this description there is no way around this fact. In the last Test match three young men made their debuts. Over the last six Tests alone four others have followed this trend. All but one are under the age of 25 and have played very little cricket, let alone international cricket.

The huge positive is that on debut, Nathan Lyon, Pat Cummins and James Pattinson all took five wicket hauls. Shaun Marsh scored a brilliant century in his first Test in Sri Lanka and Trent Copeland, David Warner and Mitchell Starc showed promising signs. Exciting as these performances were, it is going to be critical that we remain patient and realistic in the short to medium term. The upside of such promising individual displays is that we have plenty of talent in our system; the challenge is nurturing and training this talent so that we can again reach the lofty heights of which we have all come to expect from the Australian cricket team.

With senior players like Ricky Ponting, Mike Hussey, Michael Clarke, Mitchell Johnson and Shane Watson forming a core group of leaders, the Australian team will always be competitive. What we must understand is that it is not necessarily going to be rainbows and butterflies every time we walk into the international arena. Test cricket is tough, bloody tough, and players have to be able to learn the ropes. They only learn from being in the cauldron. Our challenge is to give them ample opportunity in that cauldron. Without such exposure they will not develop and one day becomes the hard-earned iconic players that Matty Hayden is talking about. Coming from him it makes perfect sense because he knows just how hard it was to retire as a great of the game.

We as Australians will always prepare and play expecting to win, but history suggests that we will have to endure some frustrating days while the less experienced players find their feet. By no means am I adopting a defeatist attitude. For one, anyone who knows me understands that is not in my nature.

Secondly, my gut feeling is that we are in a very exciting phase of Australian cricket that has been encapsulated in the recent successes in Sri Lanka, South Africa and last week in Brisbane. What I am saying though is that we as coaches, administrators, supporters, observers, and critics will have to take a breath at times and respect that the younger players are going to make a few mistakes along the way. Mistakes are what help people grow and learn. Without mistakes and weaknesses how are we supposed to get better?

A mantra adopted by most of the best teams is an attitude devoted to constant improvement. Improvement is made by taking feedback from our mistakes, and our successes. Over time the best players and teams take this information and transform it into a successful and consistent recipe that helps them produce consistent results. This attitude has been the cornerstone of the Steve Waugh and Ricky Ponting tenures as highly successful captains, and I now hear Michael Clarke urging the same approach every single day. Mickey Arthur also seems to have the same attitude, just as John Buchanan through to Bobby Simpson did in their roles as Australian coaches.

This attitude of constant improvement holds merit. In fact, it is the only attitude the great players and teams have in common. While this statement is not one of rocket science my observation of great teams and individual players is that they get up every single day looking for ways to get better. Because of this they tend to work harder than everyone else, search deeper than the rest and learn greater lessons from their inevitable mistakes.

If Australian cricket is to continue its extraordinary ability to produce great players, patience is required. Australia has produced many iconic players that act as heroes and inspirations to the next generation, as well as fantastic mentors who pass on their knowledge, experience and expertise to the current and incumbent players. If you were to ask every one of those legends what it took to retire where they did, I am certain they would all say that their journeys were never easy and that they needed people to keep backing them and supporting them especially when times got the toughest. Over the next few years we will need to keep supporting and moulding the next crop of players so that we can enjoy sustained success, while admiring the rising of the true diamonds which we can call icons of our game. Patience is required; it will be worth it. It always is.