It seems almost unbelievable that World Cup 1975 was the first multi-nation ODI tournament in history.

When Madan Lal ran in to bowl to John Jameson at Lord’s on June 7, 1975, few had an idea that they were witnessing history. The same day witnessed three other matches — between New Zealand and East Africa at Edgbaston, Australia and Pakistan at Headingley, and West Indies and Sri Lanka at Old Trafford. However, the Lord’s match is generally accepted as the first match in the World Cup.

The women, of course, had started their own tournament a couple of years back. This had (in all probability) given birth to the idea of a World Cup. The decision that a tournament consisting of only One-Day Internationals (ODIs) would be played was taken on July 25, 1973. The venue, of course, had to be England. Prudential Assurance sponsored the tournament. The tournament would include 15 ODIs (each of 60 overs) spread over two weeks.

It seems almost unbelievable that World Cup 1975 was the first multi-nation ODI tournament in history. For most teams the tournament was a novelty; English counties looked upon the tournament as a two-week gap in the Championship; and Wimbledon got priority over the World Cup in the press.

The tournament started in bizarre fashion, with England piling up 334 for four and Sunil Gavaskar batting out all 60 overs (facing 174 balls in the process) and scoring only 36. The remaining league matches were one-sided, barring the Group B contest between Pakistan and West Indies at Edgbaston. West Indies were reduced to 166 for eight after Pakistan finished on 266 for seven, but Deryck Murray added 37 with Keith Boyce and an unbeaten 64 with Vanburn Holder to clinch victory.

The first semi-final at Headingley turned out to be a dramatic encounter, with Gary Gilmour skittling out England for 93. With Australia reeling at 39 for six in response, he walked out and sealed the match with 28 not out. West Indies strolled to a five-wicket victory over New Zealand in the other semi-final at The Oval.

Put into bat in the final at Lord’s, West Indies were reduced to 50 for three before Clive Lloyd, with an emphatic 85-ball 102, turned the tides. Rohan Kanhai played the perfect anchor, and with the lower order contributing, West Indies finished on 291 for eight. Australia were struck hard by the underrated Boyce (37-ball 34 and four for 50) and Viv Richards, who ran out Alan Turner and the Chappell brothers with amazing throws. Dennis Lillee and Jeff Thomson raised hopes with a 41-run last wicket stand, but in the end West Indies (deservedly) lifted the trophy with a 17-run win.

When Alvin Kallicharran treated the great Dennis Lillee like a schoolboy bowler!

Semifinal: Gary Gilmour takes 6 for 14 and plays a match-winning innings

It was the first ODI tournament consisting of multiple teams

The final was played on the longest day of the year

Gary Gilmour played two World Cup matches (the semifinal and final) and claimed 11 wickets; he also top-scored in the semi-final 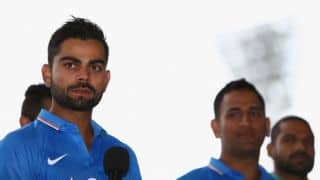