Unlike the 1975 edition, World Cup 1979 was not a high-scoring contest. There was not a single team score in excess of 300 (one must remember these were 60-over contests), and only two hundreds, from Gordon Greenidge and Viv Richards, who were the top scorers of the tournament as well.

With Australia sending a Kerry Packer-hit side and India performing abysmally, the groups turned out to be no-contests. West Indies (followed by daylight), New Zealand, England, and Pakistan had no problems reaching the semifinal. The last three teams were the only ones involved in close contests with England beating Pakistan by 14 runs and New Zealand by nine runs.

Let us have a look at who the heroes of the tournament were:

Batting record: Greenidge and Richards led the charts, as mentioned above. Glenn Turner, top-scorer of World Cup 1975 (with two hundreds) made an entry as well in a list dominated by men from the four semifinalist sides.

Lloyd joins the fray, making it three out of five men from the Caribbean on the batting averages chart. After an outstanding World Cup 1975, the ubiquitous Turner makes another appearance.

As mentioned above, Richards and Greenidge scored the only hundreds of the tournament.

Bowling records: The unheralded (and overlooked) Derbyshire mainstay Mike Hendrick finished as the leading wicket-taker. Though there was no West Indian in the top four, their three stars — Michael Holding, Colin Croft, and Joel Garner — shared 24 wickets between them. Garner, with an average of 21.50, a strike rate of 35.3, and an economy rate of 3.66, was the worst of the three, which says a thing or two about the West Indies attack.

Though Holding led the averages chart, the list was generally dominated by swing bowlers. Once again Hendrick ranked high, and Sikander Bakht and Brian McKechnie featured up the list as well.

Though Alan Hurst led the strike rates chart, let us wait for a moment to ponder at Holding’s numbers (one must remember that he played a match less than Hendrick, since the Sri Lanka match was abandoned): from four matches Hendrick claimed eight wickets at 13.25 and a strike rate of 30.8.

Neither Graeme Porter nor Geoff Dymock had long careers after the superstars came back, but between them they conceded 97 from 49 overs in the tournament at under two (one must remember Hurst had a five-for). Had the batsmen lived up to their standards, Australia might not have been eliminated that early.

Hurst and Garner (in the final) were the only ones with five-fors in the tournament.

Fielding and wicket-keeping:  The wicketkeepers were led by Deryck Murray and Wasim Bari, both of whom finished with seven dismissals apiece. Bari also effected the only stumping of the tournament, off Majid Khan.

There were several fielders with three catches, but only three of them had four.

Record partnerships: Majid Khan and Zaheer Abbas had added 166 (the highest partnership of the tournament) in the semifinal against West Indies at The Oval, but the other nine wickets accounted for a mere 84. However, the most destructive stand on the list has to be the 139-run partnership between Richards and King in the final.

Team aggregates: No team in the tournament managed to reach the 300-mark, while only five times did a team go past 240 (a run rate of four): West Indies did it thrice, while Pakistan did it twice.

Not surprisingly, Canada registered the lowest three scores of the tournament, followed by a solitary entry from each of Australia and Pakistan, both against England. 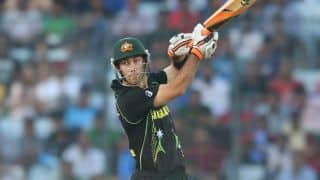