Rahane or Tiwary? One of the many tricky questions Dhoni has to grapple

Rahane or Tiwary? One of the many tricky questions Dhoni has to grapple

Keeping the disappointments of the last season in perspective and looking forward to the long road ahead, India have a number of questions before them and a vital opportunity to get things right. 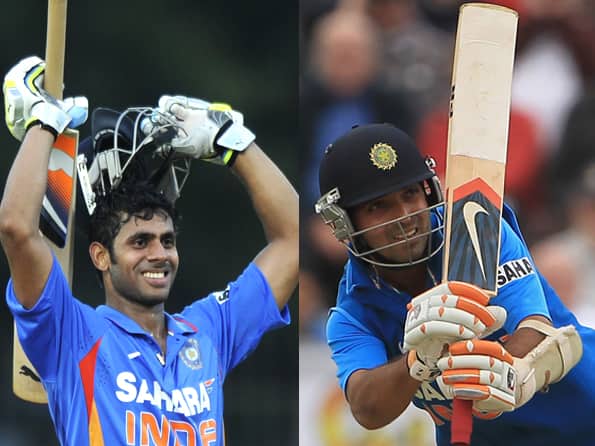 A prolonged vacation has come to an end and the Indian cricketers are back on the field of play. Mahendra Singh Dhoni’s men embark upon a new season, which kick-starts in beautiful Sri Lanka. Keeping the disappointments of the last season in perspective and looking forward to the long road ahead, India have a number of questions before them and a vital opportunity to get things right.
Dhoni’s approach makes it very clear when he said, “There are certain areas where we’ve wanted to improve, where we’ve had discussions saying these are the areas where we need to improve upon to do well consistently. This is a nice occasion to test how much we have improved and how much further we can actually improve on the field.”

Going by the Future Tours Programme (FTP) issued by the International Cricket Council (ICC), this tour was supposed to be a three match Test series. Instead, the two boards have opted for a five match One-Day International (ODI) series and a T20 international. Had they stuck to the original plan, it would have been a fantastic opportunity for India as their slide in the Test arena has been more alarming compared to ODIs. Sri Lanka may have been the ideal place to start afresh and put the nightmarish memories of England and Australia behind. Although, the Sri Lankan tracks are similar to the Indian surfaces, it is still an overseas series and a decent performance may have been a good confidence booster.

Nevertheless, Dhoni and Co. have to put their head down and try to strike the right balance – something that has been disturbed since the end of the 2011 World Cup. As discussed in a previous article, one of the biggest questions would be the toss-up between Ajinkya Rahane and Manoj Tiwary. The duo hasn’t been the luckiest as selection policies denied them well-deserved opportunities at the highest level. Despite good performances, they were restricted to the bench and didn’t get enough game time. With just one spot available, it is difficult to pick from the two and their below-par performances on the A tour to the Caribbean.

The question is: Would you select a player who has scored a hundred in his last ODI or the one who dazzled during the Indian Premier League (IPL) with a copybook approach in the crude format? Tiwary certainly needs to be treated better as he has been repeatedly marked as a stop- gap option. A hundred in his last ODI didn’t change matters. If he is picked, he has to grab the opportunities with both hands and put in a performance that makes it difficult for the selectors to ignore him. His growth has been inhibited by selection blunders in the past and if the selectors continue to persist with a similar approach, India would never be able unearth the real talent of Tiwary.

Rahane’s sound technique and cool temperament was evident during the tough tour of England last year. In the midst of a difficult tour, the youngster stood out and brought a refreshing change to the Indian line-up. He continued to impress, but was unlucky to miss out on the tri-series in Australia. With the brilliant performance during the IPL – one that would have impressed even the game’s most ardent purists – Rahane has forced his way back into the scheme of things. The stability he provides would be a major factor in his favour.

The Indian top-order is packed with the top four sealing their spots. Virender Sehwag, Gautam Gambhir, Virat Kohli and Rohit Sharma form a formidable top four – one that shouldn’t be fiddled with. Suresh Raina and Dhoni would take the other two batting spots and leaving the seventh up for grabs. While choosing between Rahane and Tiwary – the think tank has to consider the batting position. Rahane is clearly a top order batsman and likes the challenge of playing the new ball. A role in the middle may be a different cup of tea all-together and he may take time to adjust. On the other hand, Tiwary has batted in the middle in the past and may find the role more suited to his game.

The last thing Indian fans would want to see is a modified version of the infamous rotation policy – whereby the seniors may rest to give the youngsters a good run. That may be the only way both Rahane and Tiwary get a chance to play, but it would delay India’s progress and upset the whole balance of things. Dhoni has a number of tricky questions before him. Does he have a few cards stacked up his sleeve? The day the googly claimed its first victim

Paul Reiffel to make Test debut as an umpire