Warwick Armstrong to Dwayne Leverock: do not take these cricketers lightly.

Hulking and heavyset spin-bowling allrounder Rahkeem Cornwall was named by West Indies in their playing XI for the second Test against India at Sabina Park today, which makes him one of the biggest figures, literally, to play the game.

Standing at 6’6 and weighing 140kgs, in today’s era of gym-sculpted cricketers Cornwall stands out for his gait but it has not stopped him from charting an impressive first-class career. The 26-year-old has claimed 260 wickets in 55 first-class games at 23.90 apiece and scored 2,224 runs at 24.43.

On the occasion of Cornwall’s Test debut, here’s an ensemble of 10 heavyset cricketers who graced the international stage.

Before Cornwall, the Australian was the heaviest player to play international cricket, at 133kgs. But that did not prevent him from becoming one of the greatest allrounders of his era.

The most famous overweight Asian cricketer of all time, Ranatunga captained Sri Lanka to the 1996 World Cup title and remains an iconic figure in the nation’s sporting history.

Ranatunga’s gait rarely slowed him on the cricket field, and his manner of collecting singles and the occasional double is still remembered by many, as is the glide to third man he played for the winning runs against Australia in the 1996 World Cup final. He ended his international career in 12561 international runs, which shows how good a player he was.

A safe catcher as well, Ranatunga shrewdly led Sri Lanka from 1988 to 1999 during which time the team won 101 of 241 completed international matches.

Ranatunga famously sparred with Shane Warne, not once but several times.

For many cricket watchers, the abiding image of Gatting might be his bamboozled look after Warne bowled him with his first delivery in Ashes cricket back in 1993, in what has become known as ‘the ball of the century’.

For others, he may be remembered for jokes about his legendary appetite but this plump batsman was a world-class player on his day. Gifted with nimble footwork (which was remarkable, given his girth), Gatting mastered Indian spinners in India the way few have, shifting gear at will. He once hit Ravi Shastri for four sixes in an over in an ODI, then a world record.

Weighing 114 kgs – or 18 stone, as it was known in his days – Englishman Milburn was the largest international cricketer since Armstrong. Such was his physique that he was given the nickname of Ollie, after the comedian Oliver Hardy of Laurel & Hardy fame.

Yet despite his girth, Milburn wowed cricket fans across England with his batting which veered from barnstorming to blocking. Unfortunately, after scoring 654 runs at an average of 46.71 from nine Tests at 46.71, Milburn lost his left eye in a car accident and there ended his England career at the age of 26.

From being heralded as the most exciting cricketer in England, Milburn descended into self-destruction after his accident and died at 48 of a heart attack 21 years later.

At one stage, Cosgrove was tipped for a lengthy career for Australia despite his weight issues. Served an ultimatum by South Australia in 2005-06 after he returned from England unfit, Cosgrove racked up runs in domestic one-day cricket and the Sheffield Shield to earn a call-up to Australia’s ODI squad.

He was good enough to play three ODIs in 2006, from which he averaged 37.33, but as the landscape of cricket demanded physical fitness Cosgrove lost his place. At 35, Cosgrove continues to score runs for Leicestershire in English county cricket.

Arguably the most famous Afghanistan cricketer, this portly wicketkeeper-batsman has wowed fans across the globe both at international level and in various T20 leagues. Being overweight has not deterred Shahzad from swatting cricket balls into the stands or effecting swift stumpings.

Shahzad is Afghanistan s leading run-getter in T20Is and ODIs and a chirpy presence behind the stumps and in front of a microphone.

One of Bangladesh’s earliest cricket heroes, former skipper Akram Khan led the team during the latter half of the 1990s and was in charge when they moved from being an Associates member to a full-fledged ODI outfit.

Under Khan, Bangladesh won the ICC Trophy in 1997, then their first ODI and also qualified for the 1999 World Cup where they registered an improbable victory against their group toppers Pakistan.

One of the many ‘bits-and-pieces’ allrounders that came out of the England stables in the 1990s, Austin was something of a cult figure on the county circuit even though he could not cut it at the international level.

His captain at Lancashire, Wasim Akram, once described him as ‘the best death bowler I have ever seen’, and he Austin was in 1999 one of Wisden’s five cricketers of the year.

His crowning glory was helping Lancashire win the final of the 1998 Nat West Trophy, after which he was picked by England. Austin played nine ODIs and opened the bowling during the 1999 World Cup.

The master of sledging and snarling fast bowler who played 53 Tests and 33 ODIs for Australia, Hughes was one of the most colourful characters in the history of Australian cricket.

With his paunch, handlebar moustache and blatant intimidation of opposing batsmen, Hughes endeared himself to a generation of Australian cricket fans and his beer-drinking escapades added to the larger-than-life image of the man.

When Pakistan’s Javed Miandad called him a fat bus conductor, Hughes proceeded to bowl him next ball and cheekily demanded, “Tickets please!”

The most famous overweight cricketer? He could be, given his defining moment – fairly and unfairly, depending how you view it – came in a World Cup match against India which was beamed into television sets around the world.

Leverock may not be remembered as the greatest cricket player from the island of Bermuda, but he is their most iconic. Weighing in at 127kgs, the huge left-arm spinner will forever be remembered as the man who took “the catch that shook the world” during the 2007 World Cup when he flung himself to hold a stunning catch in the slips

As Leverock dragged himself to his feet and ran off towards point in celebration, all of his team-mates followed him except for the jubilant wicket-taker Malachi Jones who set off in the other direction only to realise nobody was behind him.

Leverock, a policeman and prison van driver by profession, played 32 ODIs for Bermuda from which he took 34 wickets. 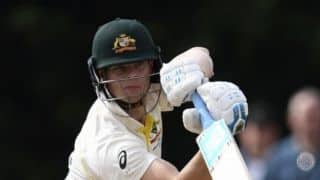