Dravid chose to address the interesting topic of oral traditions in cricket.

Very few ambassadors of the game of cricket have commanded as much respect as India’s batting legend Rahul Dravid. His records and achievements are there for everyone to see, but beyond them lies a man who is well-read, and who has an anecdote or two and lessons to share which once were key to the success of his own career. Abhijit Banare presents some pearls of wisdom from Dravid’s lecture.

This was the sixth year of the Dilip Sardesai memorial lecture held in memory of the technically solid batsman who scripted India’s first Test series win. At the end of the session, Dilip’s son Rajdeep Sardesai, a well-known face in Indian journalism reminded the audience that Rahul Dravid was the first of the six speakers to have written his speech. Perhaps, it was the preparedness that once reflected in his hunger for scoring over 10,000 runs in Tests and ODIs, remarked Rajdeep.

In his lecture, Dravid was so articulate in his points that it wouldn’t be an exaggeration to think that he must have reframed and rewritten a few sentences until he got it as watertight as his defence used to be. He chose to address an interesting topic which plays a key role in shaping and inspiring the course of a young a cricketer — oral traditions in cricket. Anecdotes and lessons narrated by former cricketers make for an interesting watch on television commentary. But are these habits of inculcating lessons through anecdotes still part of the growth of the modern cricketer?

While he touched upon an absorbing topic of learning through oral traditions, he made sure the captive audience had many reasons to smile and share a laugh in between. He began with this anecdote about Dilip Sardesai and his outspoken attitude.

“I have heard a story about how he once stood alongside the sightscreen of the Brabourne Stadium not so far from here during a match and shouted, ‘Lagori’ every time a bowler with a not-so-great action, sent down a ball. Lagori, as everyone will know, is the childhood game of seven stones in which throwing is an essential skill environment.”

From thereon, his lecture seamlessly flowed from personal experiences with Dilip Sardesai to the passion of his father towards the game and the mentorship of his school coach the late Keki Tarapore; how all this fuelled the growth of a legend.

Before he moved to the values he learnt during his Ranji days from former cricketers and fellow teammates, Dravid presented yet another anecdote he heard from Tarapore about a 20-something young man heading to Kanpur for his debut Test. There was a lot of hype in his home state of Karnataka and people even travelled to see this young man bat. To their horror he scored a duck. While many hearts were shattered, they were fortunate to witness Gundappa Viswanath came back strongly to score and century in the second innings of his debut Test match.

He proceeded to narrate another incident he observed in the 1981-82 Ranji semi-finals where Sunil Gavaskar countered Raghuram Bhat by batting left-handed against him and his natural right-handed batting against the other bowlers.

In the process, he also made sure to mention the names of some great story-tellers in Indian cricket. Dilip of course figured in the list, followed by the great administrator Raj Singh Dungarpur and former cricketer Vasu Paranjape.

“I remember reading Ram Guha’s story on Vasu Paranjpe talking about Hanif Mohammed’s defence: that if Hanif Mohammed played a forward defence in Brabourne Stadium, its echo could be heard at Churchgate Station. Since I first heard those words, I thought, now that was a forward defence to die for.” Bowlers would be cursing the author (Ramchandra Guha) and the former cricketer for letting Dravid know this story for he himself presented a similar forward defence all through his career.

Each example, carefully handpicked, stressed on the fact that much of the character and attitude of a player is shaped not through the coaches at international level but early in the age through school coaches, former players and stories like these. Dravid pointed out that while Mumbai’s ‘khadoos’ attitude is famous, it is not a value that can be taught but only inculcated by maintaining this habit of oral tradition. This is something, he remarked, was the hallmark of Mumbai cricket which turned them into the most successful domestic team in India.

In sharp contrast, the world of a modern cricketer are bereft of these ancient traditions and have been replaced by fancy electronic gadgets and a revolution in their approach towards the game thanks to the internet and YouTube videos.

As much as he spoke about the tradition, he was equally patient in replying in the Q&A session that followed. From India’s Test series loss to survival of all three formats, threat from T20 to the present crisis of chucking. Much of his thoughts and ideas indicated that he was very much in sync with the life of the modern cricketer. As sharp as Dravid was in his sense of humour, the audience too rounded it up with applauses to popular questions like whether wives and girlfriends should be allowed on tour.

After giving such a beautiful insight on the importance of cricket’s great oral tradition, it was time that someone asked about his intention of being the India coach and perhaps pass on such valuable lessons to young cricketers. It was eventually asked by Rajdeep as the final question of the day. Dravid smiled and replied that everything has a place and time to fit in. At present he is happy with mentoring the Rajasthan Royals and fulfilling duties as a commentator. But he promised to consider the role if offered in the future. For the betterment and growth of Indian cricket, we just hope it does come one day. 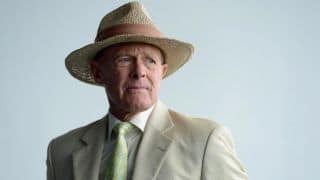 Geoffrey Boycott will believes England are not good at ODIs 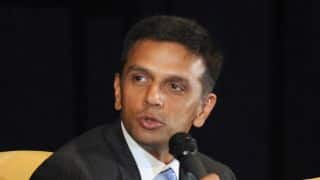