Sachin Tendulkar (left) and Rahul Dravid… They have been so consistent that we are lulled into complacency, into taking their contribution for granted © Getty Images

West Indies had given India a scare at Delhi. At Mumbai, they compiled 590 runs in the first essay and put India under pressure. When Indian openers Virender Sehwag and Gautam Gambhir failed to convert good starts to centuries, the sceptre of a middle-order collapse and a scramble to save the match loomed. Instead, Rahul Dravid and Sachin Tendulkar patiently accumulated half centuries and becalmed the Indian dressing room, even if spectators would have found the proceedings rather dull.

It’s the kind of job they have done so many times for India through their career. They have kept at it so consistently that we are lulled into complacency, into taking their contribution for granted. But one look at the formidable numbers they have mounted tells you of the enormous challenge India faces in filling their void when they will sign off.

Dravid breached the 13,000-mark on Thursday. And in doing so has scored more runs in Test cricket than anybody barring Tendulkar. The two most prolific batsmen in the history of Tests have been in the same batting line-up and have batted together for over 15 years. India have obviously been incredibly lucky to be blessed with such staggering batting depth. These numbers also tell you that in Dravid, Tendulkar found a partner who shared his tireless appetite, indefatigable spirit and, above all, the discipline to consistently put the match situation ahead of any misled quest for glory and bravado.

Add to Dravid’s tally Tendulkar’s 15,153 runs and the total runs scored by both amounts to 28,214 runs! More tellingly, in the time they have played together – that is, since Dravid’s debut at Lord’s in 1996 – the two have scored 25,585 runs in Test cricket. I can safely say that is more than the runs tally of the entire West Indies batting line-up! During this time, they have scored 78 centuries and 112 half-centuries.

Since Dravid ceased to be a permanent fixture of the ODI line-up from 2008, their one-day tally is glossed over. But there are some mind-boggling numbers to digest if we look at their overs limit achievements. They have score a whopping 25,265 runs from 1996 – when Dravid debuted at Singapore – to September 2011 – when Dravid ended his ODI career in England. Expectedly, there is more parity in their individual Test contributions with Dravid surpassing Tendulkar by 400-odd runs during the period they have played together. In ODIs, Tendulkar has a bigger lead, ahead by nearly 3500 runs.

The number of ODIs they have played is also not higher than Tests by the kind of margin one would expect. Dravid has played 276 Test innings against 318 ODI innings. This means, astonishingly, the duo has been nearly as prolific in ODIs as Tests in spite of the constraints of overs-limit. In ODIs, India have got on with life after Dravid. While Tendulkar will be missed post his retirement, whenever the moment comes, my guess is India will adapt to his absence too and get on with it.

The Test squad remains a question mark. We have witnessed the effect illustrious retirements had on Australia both in the 80s and post-Ashes 2006. West Indies were even more greatly crippled after the retirements of Desmond Haynes, Vivian Richards and Gordon Greenidge and the only truly great Test batsman they have produced since then was a certain Brian Lara. How does India plan to cope with the inevitable retirements of Tendulkar and Dravid? Nearly 26,000 runs…will the entirety of a future middle-order get there in their careers?

For the moment, fans would prefer to focus on the present. Dravid has lately brought up a flurry of personal milestones and India awaits one of Tendulkar’s that is becoming a bit of a millstone. Anticipation of the 100th hundred drew crowds on Day 3. An individual is not meant to be greater than the game, but in India that is indeed the reality.

Irrespective of how the Indian team copes with their absence, their larger than life presence in the line-up, the assurance and calm they have brought time and again to tense situations and their near-phlegmatic reliability will all be sorely missed. Whatever happens, Tendulkar and Dravid will leave behind boots far too huge to step into. 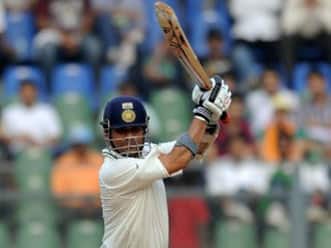