Dravid has always answered the call in the need of the hour. 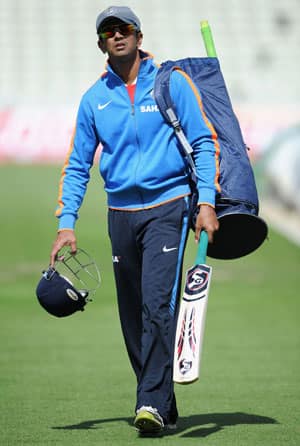 Rahul Dravid will be remembered as the quintessential team man, who captains yearn for © Getty Images

The English summer of 2011 has been about recalls and subsequent retirements. A month or two ago, Sanath Jayasuriya called it a day from international cricket hours after being surprisingly recalled for the limited-overs section of Sri Lanka’s tour to England. The Rahul Dravid script is somewhat similar, although he will continue to play the longer version even after the One-Day International (ODI) series against England.

The drama surrounding Dravid’s selection gives one the impression that the Indian cricket establishment treats him like a 911 — a source who responds to SOS calls. Whenever the Indian team has been in distress, they have invariably sought Dravid to bring sanity and stability. It is true that Dravid has been under the shadow of the likes of Sachin Tendulkar and Sourav Ganguly for majority of his career. But if there is one thing that will make Dravid stand apart from the other stalwarts it is the fact that he stood up for the team without any complaints and whenever called upon. He will be remembered as the quintessential “team man” who captains yearn for.

The Indian set-up hasn’t treated Dravid as well as they should have. They haven’t shown enough respect while dealing with a player who has done everything for the team over the years. Dravid was the man responded to keeping wickets in ODIs so that the team could play an extra batsman or a bowler. He continued doing that duty for two years till Mahendra Singh Dhoni debuted for India in 2004. Through all of that, he continued to be the backbone of India’s middle-order and played quite a few crucial knocks. These are signs of a genuine “team man” who took the phrase “one for all, all for one” very seriously. Unfortunately for him, the Indian team management just read the first part of that famous quotation.

Let us turn the clock back to the year 2007. At the end of the tour of England, Dravid resigned from captaincy and the reins were handed to Dhoni, whose first assignment was the ODI series against Australia, which India lost 2-4. Dravid had a tough series as he couldn’t score a fifty in any of the six matches he played. He had gone nine innings without a fifty and was instantly dropped from the ODI squad for the series against the touring Pakistan team.

The decision of the selectors was baffling as Dravid had been the “Mr. Dependable” for India in ODIs for years and one bad patch had seen his ouster. That decision was even more shocking if one looked at Dravid’s ODI stats from October 26, 2006 to August 27, 2007. August 27, 2007 being the cut-off because his nine innings long lean run started after the said date.

Here are the said numbers:

Here is a man who had been the captain of India, was scoring runs consistently, averaging over 50, winning games etc. and nine innings without a fifty leads to him being dropped. Can anybody see justice? If he hadn’t resigned from captaincy, then he may have continued to be a part of the ODI setup. It was almost as if the establishment was looking for a chance to keep him out of the ODI squad.

His recent call-up isn’t the first SOS call he has received. When India were going to South Africa for the ICC Champions Trophy 2009, Dravid was called up to the squad after being out for nearly two years. This decision was taken keeping in mind the young Indian batsmen’s struggles against short bowling in the ICC World T20 earlier that year. Thus, Dravid was expected to bring stability to the middle-order with his sound technique and fantastic temperament. This return was short lived as he played six matches and was discarded immediately.

His stats in those six matches are as follows:

Those numbers do not deserve the axe. In fact he had done decently and it looked like he would settle into the ODI line-up again, but that run ended abruptly. It looked as if he was left out after the supposed “purpose” had been served.

Dravid’s latest call-up is without doubt another SOS. Fans should be happy that he has announced his retirement from limited-overs international cricket after the assignment in England as it will not give the Indian team management another opportunity to treat him the way they have done in the past. The selectors will not have a chance to drop him from ODIs again and also call him up whenever the team is in a tough situation. He will continue to play Test matches, where he is an indispensable cog in the Indian unit.

Be it wicket-keeping or answering distress calls, Rahul Dravid has always stood up whenever Indian cricket has needed him to. Every cricket lover would hope that he signs off with a flourish.