Rajasthan Royals have travelled from being an underdog to a team which has sailed through extreme adversities. The spot-fixing saga was nothing more than a perfect challenge for Rahul Dravid and Paddy Upton to play the role of a mental conditioning coach. Few months later, the same team is looking as fresh and motivated as ever. Abhijit Banare analyses the Rajasthan team’s growth and the role of fine leadership in bridging the gap. 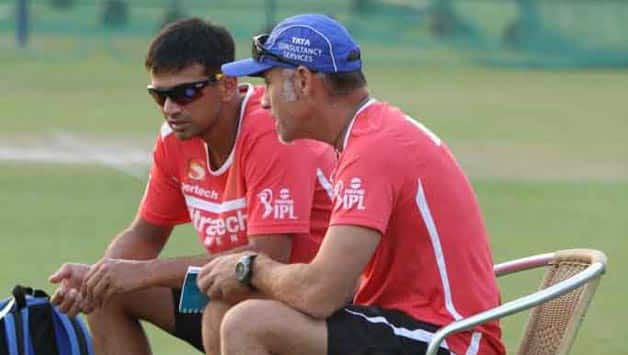 Rahul Dravid (left) made all the difference leading the Rajasthan Royals on the field while Paddy Upton played an important role in keeping the team focused off it. In context of the of the spot-fixing controversy that unfolded, Upton had a major role to play in motivating the team © IANS

Rajasthan Royals have travelled from being an underdog to a team which has sailed through extreme adversities. The spot-fixing saga was nothing more than a perfect challenge for Rahul Dravid and Paddy Upton to play the role of a mental conditioning coach. Few months later, the same team is looking as fresh and motivated as ever. Abhijit Banare analyses the Rajasthan team’s growth and the role of fine leadership in bridging the gap.

On May 3, 2013, the Telegraph India, published an interview of Paddy Upton on his new job as head coach of the Rajasthan Royals team. Upton in his interview spoke at lengths about the great team culture built in the Rajasthan team and gave a big share of success to the gentleman of the game Rahul Dravid. “As a leader, Rahul gets a 10 on 10… I’ve seldom heard him issue an instruction… Rahul approaches situations with an enquiring mind, wondering what will be best… He asks more questions than what he himself answers. Most of the leaders have opinions and answers, but Rahul has questions,” he said.

As fate had in store for them, within the next two weeks a murky saga of spot-fixing unfolded, which had sliced the morale of the team into pieces. This is a team which is built around young lesser heard Indian talents hungry to find their way up. And amongst them, there were just two senior India players — Dravid and S Sreesanth — apart from a handful of experienced overseas ones. When you have young players looking up to these seniors and following the footsteps, the situation could have been much worse.

From thereon, it was not just about managing the team but rebuilding the team from scratch as well. When there’s speculation of more players being involved, a seed of distrust and suspicion starts building up by the day. Even the finest of international teams faced with such crisis can buckle under pressure. While the Royals ended the Indian Premier League (IPL) 2013 season on a high, it was fairly possible that the low communication between May and September and the controversies could have broken the team apart further, but Dravid and Upton’s management skills have changed the atmosphere of the team to a winning one.

In franchisee teams, with so much diversity, the role of leadership and contribution in team building is extremely essential. Since the controversy, you could hear most players crediting Upton and Dravid for their success. For a player of Dravid’s stature, who has maintained a clean slate throughout his life in terms of controversies, he could have easily chosen to quit. It was nothing much than a muck on white shirt and he did express it as one of the lowest moments in his career. However, The Wall made all the difference on the field while Upton made the difference off it. In context of the situation, the latter was more important to ensure the players walk on the field extremely focused. When Dravid states that the spot-fixing saga only brought the team together the message comes across pretty clear.

Little known players in the set-up like Kevoon Cooper, Sachin Baby and others come out openly to credit these two individuals. It shows the effort they have put into the huge pot of motivation and spirit, from which the rest in the team have drawn, has been successful.

As far as the performance on the field is concerned, Rajasthan, usually referred as punching above their weight in victories, have turned into a force to reckon with. On paper, the big names are missing but on the field someone like Sanju Samson and Praveen Tambe come across, as confident and firm in their abilities to secure a win for the team as someone like Shane Watson and Brad Hodge. In fact Watson, as an individual player is a great example of what a good team represents. Under the leadership of Michael Clarke and the statements we heard about the burly all-rounder during The Ashes 2013, it felt as though he was a demon within the team spoiling the atmosphere. However, not once have we heard any controversy involving him in the Rajasthan set-up. This is not to demean Clarke’s abilities, but a credit to Dravid and Upton, who have kept the team at par and treated everyone equally, something which Watson himself accepts.

As the team moves ahead into the semi-finals of the Champions League T20 (CLT20) 2013 maintaining a phenomenal home record, the results won’t really matter for someone like Dravid. The fact that he along with Upton have brought the team back on track will be a more treasured feeling. In the above context of spot-fixing and the success they managed to achieve, much of it wouldn’t have happened if the young talents and the experienced players didn’t place attitude and team ethics over their individual success.

Having set things right, the end of the CLT20 will be the perfect platform for Dravid to finally bid adieu. And if not for the performance, he will definitely be remembered for the team he has built — just like Shane Warne did before The Wall took over.

Brisbane Heat and Perth Scorchers: A poor showcase of Australian-ness