In IPL 2011, he bowled brilliantly for his side Pune Warriors. 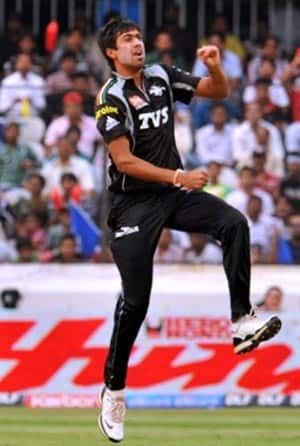 Rahul Sharma’s selection into the Indian team for the One-Day International (ODI) series against England is an indication that the selectors want to get going with the process of rebuilding the team. The team management and the selectors have lost patience with Harbhajan Singh, whose lack of penetration and guile has hurt India big time in recent games. His reputation may have kept him in the side and saved him from the axe on numerous occasions in the recent past, but not any longer.

Rahul Sharma came into the limelight during the Indian Premier League (IPL) 2011 where he bowled brilliantly for his side Pune Warriors.

The Warriors made an abysmal debut, but Sharma was one player who stood out with his consistency. His economical and tight bowling made the batsmen struggle for their runs and made some of them look absolutely ordinary. He gave them no room and frustrated them to a point where they got out trying to do something extraordinary.

Sharma’s rise to the top would be an inspiration for many budding cricketers. A facial nerve problem threatened Sharma’s career but he has crossed those hurdles and obstacles. It is hard to believe that he suffered from this problem during the IPL 2010 and less than two years later he is in line for an India cap. Sharma isn’t a big spinner of the ball and is in the Anil Kumble mould. Like Kumble, Sharma has a very effective googly which is well disguised and used as a surprise weapon. He relies on his variation of length as he pitches it around the corridor of uncertainty. Batsmen do not get the opportunity to cut as he keeps his relatively short deliveries around the off stump. Again, like Kumble, he uses his good height to good effect to purchase copious bounce.  His deliveries, thus, climb on the batsmen even as they expect it to stay a lot lower.

An economy rate of 5.46 in the IPL 2011 speaks volumes of his control and accuracy. In T20 cricket, economy rates under seven are considered good. However, here is a young leg-spinner who conceded less than a run a ball throughout a tournament like the IPL. This just highlights the work he has put in and the thought and planning behind his bowling.

These figures prove that he isn’t just the bowler who contains but can be a very effective wicket-taker. A total of 16 wickets in 14 T20 games are good returns and an average of 17.06 indicates a penetrative ability.

Some of his bowling figures during the IPL 2011 are unheard of in T20 cricket. When Pune met Mumbai, Sharma bowled a sensational spell of two for seven. This came against a line-up that boasted the likes of Sachin Tendulkar, Rohit Sharma, Andrew Symonds, Ambati Rayudu and Kieron Pollard. He bowled without fear on that day and wasn’t overawed by the reputation of some of the most destructive batsmen in the opposition ranks. It speaks well of his temperament and character which will hold him in good stead when he dons the Indian jersey for the first time.

Sharma’s heroics in the IPL got him in the selectors’ radar who immediately awarded him a spot in the Indian team for the Emerging Players Tournament held Down Under. A back injury denied him an opportunity to parade his talents in Australia which means that he would be untested at the A-level before his expected India debut. The Emerging Players Tournament was a good chance to get exposure in alien conditions and Ajinkya Rahane’s performance in England is evidence of the confidence a player gets by performing well in such a competition. Sharma may have missed his chance but a debut in home conditions will make him feel comfortable as these were the surfaces on which he bowled his leg-breaks and the googlies to great effect.

Although Sharma’s selection is a positive move, the selectors have to be careful in handling him. In the past, quite a few players have been picked on the basis of a good IPL season. Some of them such as Pragyan Ojha and Amit Mishra remained in the national setup. Whereas the likes of Manpreet Gony withered away after failing to perform in limited opportunities in international cricket. Gony was selected into the Indian team after he impressed during the IPL 2008. However, his international career was restricted to two games as he was dropped after the fruitless outings. Since then, Gony has not only slipped off the national radar but also isn’t a regular for his IPL side.

The Indian set-up have to be wary of their past and ensure that they do not commit the same errors. Even if Sharma fails to replicate his IPL showings in a game or two, they shouldn’t be quick to send him back to domestic cricket. When you blood youngsters into the side, they need the backing of the captain and the team management. If India are to get the best out of Sharma at the highest level they need to back him and prevent another Gony-like situation.

For now, Rahul Sharma can celebrate his call-up. It is the dream of every young cricketer to represent his country at the highest level. However, he needs to put his head down and concentrate on the immediate task at hand. Sharma will play for Rest of India in the Irani Trophy against the Ranji champions Rajasthan. A good performance there would further his case for a spot in the playing eleven.

Katich, Sarwan yet to receive IPL 3 money from KXIP