The English crowd was brimming with euphoria when rain stopped play before tea. That in fact came as a breather amidst their team’s top-order crash. Even a draw seems far-fetched now, and rejoicing the drizzle was the only alternative they had. They travelled across continents after all. They would do the same if the weather gods eventually offer England a reprieve.

The home crowd gathered in big numbers to watch Mitchell Marsh convert his maiden three-figure mark to a double-hundred. The last time an Australia had done this was back in 2006 by Jason Gillespie, in Bangladesh. Marsh was coursing towards the same milestone, but James Anderson dashed everyone’s hopes and changed Marsh’s path to the pavilion. The partnership remained at 301 runs.

The Australians now threw their expectations on Steven Smith’s maiden triple-hundred, but Anderson likes to play a spoilsport. Smith walked back after being cornered LBW. However, Smith made sure Anderson too does not get any slice of fun. He declared the innings when Anderson was one wicket away from a five-for and Australia had one more scalp left. They ended with a 259-run lead.

Australia cook the root of the matter

That is why Smith fancies employing Josh Hazlewood. The batsmen is often unsure whether to play or not, and then there is Mark Stoneman: he decided against playing the moment ball met his bat. Tim Paine took a simple catch.

This match was about celebrating Alastair Cook’s 150th Test. It rather jubilated Smith’s 239 and Marsh’s 181. In the second innings as well, Cook failed after getting a decent start. Hazlewood took a one-handed beauty off his own bowling.

The fidgety Root plucked three boundaries with his wristy batting, but tattered as soon as he was in the vicinity of Nathan Lyon. He decided to stroke through covers off the first delivery, and got himself edged to Smith.

Vince wins the session until Starc makes a difference

James Vince thought that he might as well have fun. England are slipping downhill and there’s still fun to gather before reaching the bottom. He played a delightful 55-run knock until Mitchell Starc pulled off this miracle:

The day was called off early due to rain. England would like to change the word ‘day’ with ‘match’ tomorrow. That would be a dart in the flesh for the Australians. 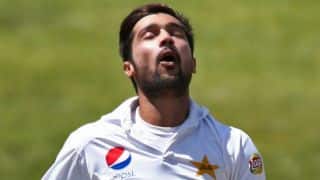