Going ahead, RR may or may not add players in next year’s auction, but that is not going to serve the purpose completely.

Rajasthan Royals (RR) started off extremely well in Indian Premier League (IPL) 2015 with five wins on a trot, but fizzled out when the others started getting more serious about their business. Devarchit Varma reviews RR’s performance in IPL 2015 and explains why they were nowhere near being termed a ‘champion side’.

Consider this scenario: you own a Ferrari; it remains parked in your garage because you do not drive it regularly; you prefer using the other cars that you own. The rich neighbourhood is jealous of it, and slowly plot matching the firepower that you possess. You remain on top of the others when they are just getting started, and when they get going full throttle in the competition, you end up being no match for them at all. This, pretty much sums up RR’s journey in IPL 2015, where they somehow managed to squeeze into top four but did not do enough to be considered as a strong force.

The strength of the Royals lies in their ability to get the best out of everyone they have associated. From big names in Ajinkya Rahane, Shane Watson and Steven Smith to the lesser known such as Deepak Hooda, Ankit Sharma and others, RR have always revelled in utilising the best of what they have, to turn them into a force that threatens the top echelon in IPL. But it is just that. RR are a very strong unit, but nowhere close to be termed as a champion side. READ: Steve Smith says I don’t really like to listen to too many people

In hindsight, there is nothing that RR lack in terms of manpower. They have some of the best Twenty20 players from India and abroad, and the blessing that they have in form of Rahul Dravid alone is enough to fill in for the vast number of coaching staff that the other teams have. But somehow, somewhere, RR fall short every season, paying heavy price of their mistakes, their shortcomings and their misfiring. READ: Rajasthan Royals have the best uncapped Indian talents

Before the start of the season, in a meeting with the media, the frontmen of the franchise, Dravid, Rahane, Watson, Smith and even James Faulkner laid emphasis on the importance of starting on a winning note in IPL. They did achieve their goal by winning five on a trot, but when the tide turned and the time came for their heroes to clear the test of character, they failed. READ: A Yusuf Pathan ton watched by mistake

Smith remained in search of runs that he would have liked. Watson stood down as leader, and tried his best. Rahane, for long, remained the Orange Cap holder, but unfortunately could not carry RR all the way through on his shoulders. Chris Morris and Tim Southee occasionally shone with their brilliance. There were occasional sparks of brilliance here and there, like Karun Nair and Hooda’s half-centuries. But the team mentored by Dravid — one of the most consistent player in his heydays — failed to gather that quality from the legendary cricketer; and succumbed.

RR’s problems perhaps lie in the fact that despite trying their best, despite getting the best out of the resources they have, they do not have big names that daunt the opposition by their mere presence.  Royal Challengers Bangalore (RCB) have Chris Gayle, Virat Kohli and AB de Villiers; Chennai Super Kings (CSK) have MS Dhoni; and Mumbai Indians (MI) appear daunting before every single clash because of the firepower they have in their ranks. But RR do not instil the fear and threat in their opposition’s mind like the others do. RR do not promise that they will set up 200-run target regularly or even chase such big totals. Even if they do, it will be a one-off incident.

The form of Faulkner, Binny, Sanju Samson and the others who form the other half of RR was poor. For the Australians, it is an acceptable excuse that they were coming off a high of World Cup win and the inspiration was not really high. But the Indian contingent let down the Royals and this is why they struggled in IPL 2015.

Going ahead, RR may or may not add players in next year’s auction, but that is not going to serve the purpose completely. What RR need is their team to peak at the right time, their Indian players to do a little more and their men to show more character than what they actually have. What RR need is their men to prioritise their needs, to fight against the odds no matter what and to show resistance, not fall like a pack of cards — something that was seen very often in IPL 2015.

There is nothing wrong in the management as well: Royals have a brilliant coaching staff in Dravid and Paddy Upton. But Dravid probably needs to conduct a few more sessions to lay emphasis on being consistent; for that, after all, is what matters in the long run and could be the most critical factor for them going ahead. 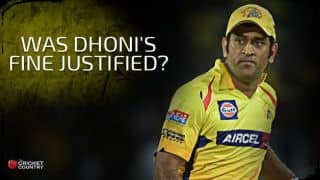 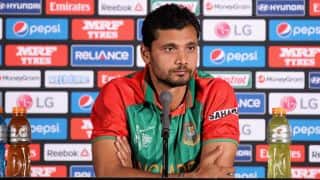