Watson, Binny, Samson, Faulkner and Rahane are the players retained by Rajasthan.

Rajasthan Royals have made lesser known picks into special players season after season. After an impressive run under a fine captain in Rahul Dravid, Rajasthan for the first time looked like a stable combination with Shane Watson and Ajinkya Rahane being the face of the campaign. The team which used the moneyball concept of tapping unknown players with the right skills have maintained a fine balance by using their all five players retentions to good effect. Watson, Stuart Binny, Sanju Samson, James Faulkner and Rahane are the players retained and when you place them in an order in the playing XI, you almost get a feeling that there’s a near perfect team in the making.

Why are these players retained and why is it a sensible call?

There are two reasons to it:

In these five players, Rajasthan already had the required resources to build a strong team. It’s not only a perfect mix of various skills but each player brings in his own unique ability and temperament in the game. Watson is the nucleus of aggressiveness, Rahane brings in the calm and composed feel, Faulkner and Binny cement the middle and lower-order of the team while Samson is the youngster who can fit in anywhere according to the needs of the team. This is as close to a perfect retention strategy you could get from the Royals.

Let’s look about the role of each player in detail:

Shane Watson: When you talk of the finest T20 players, Shane Watson is right up there among the best. His calculated slogging can rip apart any bowling attack and at the same time provides a solid bowling option for the captain. Watson can open with Rahane thereby making the perfect combination for opening. Not to forget, in Watson, Rajasthan will be eyeing a captain. And there were already rumours of Watson being named as captain of the team.

Ajinkya Rahane: He has flourished in the Rajasthan set up and there was no doubt that the team will love to have the player who boosted their chances every time their team was batting. Rahane’s ‘caution with aggression’ style of batting provides stability to the batting. In the absence of Rahul Dravid, Rahane is going to be the next Dravid for the Rajasthan team when it comes to managing the team with the bat. If there were any little concerns about form, all of it was dispelled when he showed his solid technique during the Test series against South Africa on tour.

Stuart Binny: Yet again an all-rounder in the news who had already enhanced his reputation in the Rajasthan set-up. In a way, Rajasthan provided the base on which Binny today got selected into the Indian team. By retaining the burly all-rounder, Rajasthan have reaffirmed that he is going to be a certainty in their playing XI and will their key campaigner in the middle-order — a role which he played to perfection in the previous season.

James Faulkner: Faulkner’s exploits with the bat and his abilities with the ball are well-known not only with his performance with for Rajasthan but also with his stint during the One-Day International (ODI) series in India. He is another player who was anyway going to command an exorbitant price if released for the auctions. Rather than wasting their money on using a ‘Right to match’ and splurging more money, Faulkner’s selection doesn’t come as a surprise.

Sanju Samson: An Under-19 player was anyway going to be a mandatory selection. Rajasthan did not have to search for that perfect package from the Under-19s who could contribute handsomely to their success. Samson has been on the radar of every team, especially after the ton in the Under-19 Asia Cup final. Rajasthan’s decision just shuts the door on one of the two interesting picks from the Under-19 level (with the other being Vijay Zol).

Looking at the above players, Rajasthan are no more likely to be the underdogs in the upcoming season. Their decisions in the auction will determined whether they have a team which can instill fear on paper or whether they opt for another gamble to pay off by roping in newbies. Interesting team and interesting times are ahead for Rajasthan. 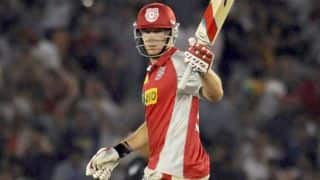