Rajasthan Royals: The underdogs who won the hearts in IPL 2013, despite the alleged let down by Sreesanth and co-conspirators

Rajasthan Royals: The underdogs who won the hearts in IPL 2013, despite the alleged let down by Sreesanth

Rajasthan Royals’ campaign in 2013 was similar to their inaugural Indian Premier League (IPL) campaign in many ways. 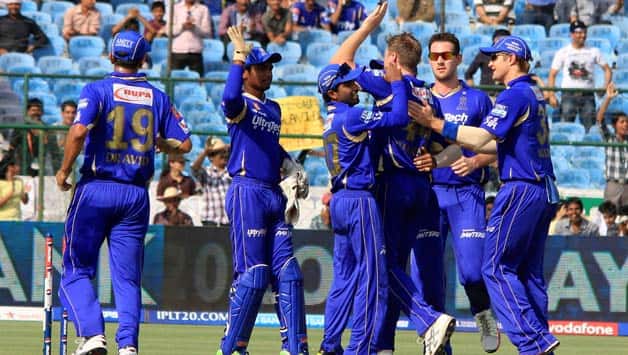 Rajasthan Royals looked a formidable unit who dominated at the Sawai Mansingh Stadium by winning all their encounters; a similar feat to their 2008 sojourn under the captaincy of Shane Warne © IANS

Rajasthan Royals’ campaign in 2013 was similar to their inaugural Indian Premier League (IPL) campaign in many ways. Under Rahul Dravid the team looked a formidable unit who dominated at the Sawai Mansingh Stadium winning all their encounters; a similar feat to their 2008 sojourn under the captaincy of Shane Warne. The team roster did not have big names yet the captain was the biggest inspiration to the young domestic players.

Mid-way through their journey, Rajasthan Royals were embroiled in a controversy when three of the team members: Shanthakumaran Sreesanth, Ankeet Chavan and Ajit Chandila were allegedly involved in the spot-fixing scandal. It was the last thing the 2008 champions needed at a crucial juncture. Despite that shambolic episode, Rajasthan did well to finish third in the standings.

The things that worked

Royals’ top-three were in very good form. Ajinkya Rahane (488 runs), Shane Watson (543 runs) and Rahul Dravid (471 runs) took the responsibility of scoring runs throughout the competition. Dravid in the initial part of the competition batted as low as No 8 thus allowing some of the other players to perform. Stuart Binny’s aggressive batting was a big plus for Rajasthan. Young 18-year-old Sanju Samson looked confident and his aggressive half-century against Royal Challengers Bangalore was one of the best innings played by a Royals’ batsman.

James Faulkner led the bowling charts with his stellar bowling performances (28 wickets). Kevon Cooper and Siddharth Trivedi took the pace of the ball and their variations confounded many a batsman. Royals looked a different unit once Watson started bowling. He bowled about 42 overs in the tournament and took 13 wickets.

What worked for the team was their combination especially in Jaipur. Royals always had the team for the condition and they knew how to put the opposition under pressure. The team also engineered nine successful run-chases out of 11, all of them assiduously planned.

Royals, however, struggled away from home winning only 25 per cent (two out of their eight games) of the matches. They struggled on slow wickets. Since Royals didn’t have a quality spinner in their ranks they struggled on most of the wickets. The medium-pacers looked ineffective on some of the flat wickets. Pravin Tambe, Harmeet Singh, Ankeet Chavan and Ajit Chandila played as spinners in different games but no one looked menacing. Brad Hogg sat out on most of the occasions since the four overseas players performed well.

When the top-order failed on the slow tracks the middle-order didn’t put their hand up. Brad Hodge, Watson and Binny played big shots when the situation demanded. Other batsmen failed to do that on a regular basis.

The spot-fixing allegations rocked the Royals. Dravid said just before the qualifier against the Mumbai Indians: “It was like bereavement,” on the spot-fixing controversy.

Shane Watson was Rajasthan’s top-performer. He scored a century [101 off 61 balls] against Chennai Super Kings, scored an unbeaten 98 against Sunrisers Hyderabad and his 34-ball 70 against Super Kings in Jaipur was one of the best innings played by the Aussie all-rounder. The 13 wickets at an average of 22.92 proved to be handy.

James Faulkner’s 28 wickets including two fifers in the tournament gave Royals’ attack an incisive edge. He was bought for only $ 400,000 in the auctions. He proved to be a good purchase. His lower-order batting was also useful.

Kushal Perera didn’t shine for the Royals. The biggest disappointment was Shaun Tait whose bowling was unreliable. He played in only three games for the Royals and picked up only one wicket giving away 98 in his 10 overs.

Sachin Tendulkar is the backbone of Mumbai Indians: Ambati Rayudu