RCB finally ended their losing streak after a string of losses.

Ajinkya Rahane starts with a bang: The way Ajinkya Rahane started things off, it seemed RCB would have to face a stiff total. The leading run-scorer and Orange Cap holder hit two fours and a six in his 12-ball 18. However, he missed a slower ball from Harshal Patel and was out LBW. This was the start of the end for RR. Inspired Royal Challengers Bangalore maul Rajasthan Royals by 9 wickets in IPL 2015 Match No. 22

Mitchell Starc strikes back: Mitchell Starc was in tremendous form in ICC Cricket World Cup 2015, where he won Man of the Tournament. His return to RCB after missing the first few matches was not too successful, though he bowled well. Against RR, he was back to his groove. Starc accounted for top-scorer Steven Smith, big hitter Stuart Binny, and Dhawal Kulkarni as he finished with three for 22 in his four overs. Royal Challengers Bangalore restrict Rajasthan Royals to 130/9 in IPL 2015 Match 22 at Ahmedabad

RR capitulate against disciplined bowling: An early flourish notwithstanding, RR were never allowed to get into the game. Just when Karun Nair and Smith looked like getting a substantial partnership, Nair was run out. Deepak Hooda and Sanju Samson had a rare off day as well. Harshal Patel was disciplined as well, taking two wickets for 23 in his four overs. In the end, RR never had enough runs. FULL UPDATES: Rajasthan Royals vs Royal Challengers Bangalore

Dinesh Karthik takes a gravity-defying catch: James Faulkner is one of the most dangerous finishers in the game. His ability to play the big hits is rivalled by few, especially in the death overs. So when he played a scoop that looked like it was going for four to fine leg, the RCB supporters might have been a bit worried. They need not have been though. Wicketkeeper Dinesh Karthik anticipated the shot, and jumped a long way to his left to pluck out a catch mere inches from the ground. In doing so, he brought back memories of his famous catch to dismiss Graeme Smith in ICC World T20 2007. FULL SCORECARD: RAJASTHAN ROYALS VS ROYAL CHALLENGERS BANGALORE

Virat Kohli smashes, Chris Gayle and AB de Villiers contribute: Virat Kohli and Chris Gayle came out to open for RCB. Gayle was not his usual self, but still managed to hit three fours and a six. However, Kohli was on another echelon. He hit one four and three sixes, but it was the manner in which he manipulated the field that stood out. With AB de Villiers (47*) for company, Kohli played with abandon as RCB romped home by nine wickets to get their campaign back on track. 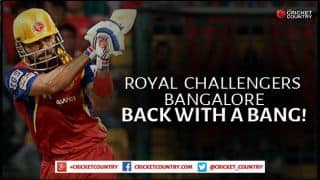 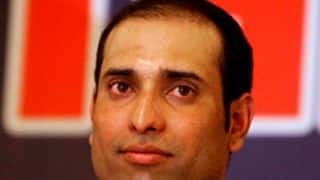