On November 3, 1999, Rajiv Nayyar batted for 1,015 minutes — the longest innings ever by a batsman in First-class cricket. Abhishek Mukherjee relives the marathon innings.

When Jammu & Kashmir were bowled out for 249 at stumps on Day One at Chamba in a Ranji Trophy match, they had thought they had scored enough for a team in the regional stage. They possibly had no idea what was in store for them — and when they would get a chance to bat next. It turned out to be somewhat like a street-cricket match where, once a side got a chance to bat, they never relinquished the opportunity.

Himachal Pradesh began their innings on Day Two. It was about an hour into the day’s play when Ajay Mannu fell to Surendra Singh, and Rajiv Nayyar walked in at 39 for 1 in the 11th over — definitely not a rate significantly slow. Serious attritional cricket followed after that.

The Himachal Pradesh batsmen decided to dig themselves in — and not score runs either. Rajiv had Nischal Gaur for company. The duo batted on, thwarting the Jammu & Kashmir attack. Gaur batted at a snail’s pace, as the scorecard refused to budge. They batted till lunch, and then past tea, before Gaur finally got caught behind off Ashwani Gupta. Gaur’s 69 had lasted 227 balls, and he was in the middle for 312 minutes: the partnership had yielded 146 in 66.4 overs.

Himachal Pradesh also lost Arun Verma before stumps on Day Two: Sangram Singh hung on during the dying moments, and Himachal Pradesh ended the day at 219 for 3 from 91 overs – a score from where they could take charge of Day Three. Rajiv Nayyar was unbeaten on 89.

Nayyar reached his hundred the next morning. It was his 13th in Ranji Trophy. However, even as Himachal Pradesh took the lead, Nayyar — the captain of the side — decided against acceleration. The pace of the game was even slower than that of the previous day: Yashwinder Singh, coming in after Sangram, scored 55 off 129 balls and helped Nayyar put up 91 for the fifth wicket. On his part, Nayyar, got even slower. He reached his 150 after tea, and ended the day on 170 after about 11 hours of batting: Himachal Pradesh meandered to 407 for 6 at stumps. The day’s play had yielded 188 from 89 overs.

Nayyar had the option of declaring overnight and going for the kill the next morning. Instead, he decided to drone on. In Jaswant Rai he found his perfect companion. Together, they batted for 253 minutes and added 107 runs. Rai batted like he meant business, and let even Nayyar outscore him. In an innings spanning over 4 hours, Rai faced 183 balls for his 28 as Himachal Pradesh took the score from 400 to 507 — which meant that they batted at an agonizing pace even when they had a huge lead.

Nayyar became the first batsman to score a double-hundred for Himachal Pradesh in his home town. He went past 250, but decided to bat on. In January 1958, Hanif Mohammad had batted 970 minutes (999 by his own admission) to score 337 and save a Test against West Indies after they were trailing by 473 runs.

Nayyar did not rest till he batted for 970 minutes, and then went past even 999 minutes. He became the first batsman in the history of First-class cricket to cross the 1,000-minute barrier. He finally fell as Kavaljit Singh broke through his defence: the epic 271 had lasted for 1,015 minutes. Nayyar had faced 728 balls, hit 26 fours and — hold your breath — a six. He was ninth out with the score on 552, and when Himachal Pradesh were finally bowled out for 567, Jammu & Kashmir were left with a meaningless 5 overs to bat.

All in all, it was a humongous effort, a feat that still stands in an era where records tumble every other day — though it did little for the match or the sport. 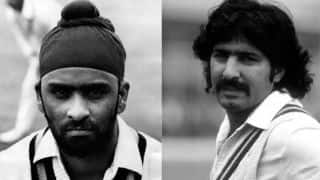