In his heydays, Ramnath Kenny used to bring crowds to their feet with nimble footwork and elegant strokeplay.

Ramnath Baburao Kenny was not your quintessential Bombay cricketer: in a team of dour men whose batting thrived on no-nonsense existentialism, Kenny — of a slight, 5’7” frame — used to bring crowds to their feet with nimble footwork and elegant strokeplay. Ramachandra Guha called him a “graceful stylist” and “an elegant front-foot batsman with an unflappable air.”

Unlike most eye-catching batsmen, however, Kenny never compromised on numbers: a career of 3,079 runs at 50.47 from 59 First-Class matches with 11 hundreds bore testimony to his appetite for runs. The backbone of a successful Bombay side in the late 1950s, Kenny found the competition too tough and moved to Bengal, where he played out his career.

He also played 5 home Tests in the late 1950s against two strong sides, both of whom won the series. He has his moments, but his Test career read a mere 245 runs at 27.22. Though not used at Test level, Kenny was an off-break bowler who could provide the occasional breakthrough, and managed to pick up 15 wickets at 31.20.

The son of a mill manager at David Sassoon & Co., Bombay, Laxman Kenny played Ranji Trophy for Bombay in the late 1930s and early 1940s. His brother Ramnath rose through the ranks early, making his First-Class debut against the touring Commonwealth XI. He scored 13 before Bruce Dooland bowled him.

When MCC toured India in 1951-52, Kenny got an opportunity to play them for Indian Universities. He removed Douglas Carr as MCC scored 340, and was pushed down to No. 9 by Pankaj Roy as the students struggled against “Dusty” Rhodes. The scorecard read 236 for 7 as Kenny walked out: he shepherded the tail and remained unbeaten on 86 as Indian Universities secured a 35-run lead.

Indian Universities were up against Pakistan next season; Kenny scored runs in style, and fell agonisingly short of a maiden hundred when Israr Ali trapped him leg-before for 99. He reached there in his next season: playing for Bombay against Commonwealth XI Kenny walked out at 24 for 3 and top-scored with 143. That season he also scored 114 in the Ranji semi-final against Madras and finished with 524 runs at 52.40. He was named an Indian Cricket Cricketer of the Year.

Come 1956-57, and it rained runs for Kenny as his flow of runs reached new heights. In consecutive innings he slammed 139 against Maharashtra, 132 against Uttar Pradesh in the quarterfinal, and a career-best of 218 against Madras in the semi-final. His 529 at 105.80 was easily the highest aggregate in that season’s Ranji Trophy — way clear of Rusi Modi’s 362 at 90.50.

With another 142 against Maharashtra and India going down at Green Park to West Indies by 203 runs, Kenny was drafted in for the third Test at Eden Gardens. Kishin Wadhwaney, surprised at the selection, later wrote in Lala Amarnath’s biography: “Ramnath Kenny, among some other changes, was included in the third Test. His inclusion was surprising as Amarnath was opposed to him. It was not that he did not deserve place. But because he was considered Duleep’s protégé.”

Along with Raman Surendranath, Kenny made his Test debut in one of the worst displays of India in Tests. Rohan Kanhai scored 256, Basil Butcher and Garry Sobers added hundreds, and Roy Gilchrist and Wes Hall shared 15 wickets between them. India lost by an innings and 336 runs — their worst margin ever and the third-largest margin in history. Poor Kenny struggled against pace of the order he had never encountered, and scored 16 and 0 before falling to Hall in each innings.

Somewhat unfairly, Kenny was left out of the other two Tests, both of which India lost. When Australia toured India next season they defeated India by an innings at Kotla, and Kenny, having scored 140 not out against Maharashtra, was brought back.

It turned out to be another historic Test — one that witnessed India’s first Test win over Australia. After India were bowled out for 152 by Alan Davidson (who bowled Kenny for a duck) and Richie Benaud, Jasu Patel struck back, taking 9 for 69 to restrict the tourists to a 67-run lead. As Davidson ran through the Indian top-order, Kenny walked out at 153 for 5 to join Chandu Borde.

The onus was now on Kenny to prove his worth. One poor innings would probably have marked the end of his career, but he refused to budge. As Borde took charge, he was comfortable in taking the backseat; after Borde fell he had another partnership with Bapu Nadkarni before Davidson trapped him leg-before for 51. India had lost 4 for 5 in the end, but they had already reached 291, in a position to control proceedings.

The stage was now set for Patel and Polly Umrigar to take control. Australia reached 49 for 1, but the spinners kept the stranglehold on. India won their first Test against Australia, but perhaps more significantly, they had levelled the series.

Kenny was retained for the next Test at Brabourne. He scored 20 in the first innings, but after Australia secured a 98-run lead, Kenny found himself in at 112 for 4 — once against fighting to save the Test. Along with Abbas Ali Baig — yet another of those elegant men from Hyderabad — Kenny helped India save the Test. The pair added 109 before Baig fell; Kenny finished on an unbeaten 55.

Les Favell’s hundred and Benaud’s 8 for 86 ensured an innings victory for Australia at Chepauk. India had started well: they had lost Roy early after Australia had put up 342, but Budhi Kunderan and Kenny took the score to 95 for 1 before the collapse began. Kenny fell for 33, and India lost their last 19 wickets for 192.

Kenny failed in the first innings in the last Test at Eden Gardens as Australia managed a 137-run lead. Ramchand pushed him down to 8 (and himself batted at 9), and he joined ML Jaisimha (who batted at 4) at 206 for 6. Jaisimha and Kenny put up what Guha later called a “marathon match-saving effort”. In the end, Jaisimha scored 74, Kenny 69, and chasing 203 Australia finished on 121 for 2.

India had lost the series but had certainly not disgraced themselves. Kenny finished with 229 runs at 32.71, and was the only Indian barring Nari Contractor to average over 30 in the series. Surprisingly, he never played another Test.

Kenny returned to domestic cricket with 164 against Baroda, and moved to Bengal the following season. Once again he did well against MCC: playing for East Zone Kenny top-scored with 70 — an innings sandwiched between 136 against Assam and 90 against Bihar.

Following Bengal’s defeat in the semi-final against Rajasthan Kenny decided to hang up his boots. His last match — a Defence Fund match — saw him score 20 and 25. He was only 33 when he quit First-Class cricket.

Kenny took up a job in Mahindra & Mahindra before switching jobs to join The State Bank of India, Bombay. He also became a professional coach in North England while playing for Cumberland, and is usually credited with the development of a certain Sunil Gavaskar in his early days. He passed away on November 21, 1985 at Bombay, less than two months after his 55th birthday. 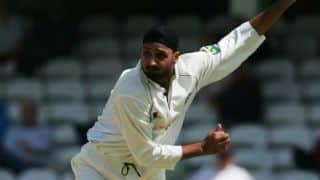