Breaking down the numbers of Maharashtra and Karnataka's journey.

Two strong and the deserved teams take on each other to crown themselves the Indian Domestic Champions. Bharath Seervi brings out a statistical preview of the final between Karnataka and Maharashtra.

Karnataka and Maharashtra will play the final battle of Ranji Trophy 2013/14 at Hyderabad from January 29. Both teams look equally strong considering the current season performance. Six victories and four draws is what both the teams have produced in their ten matches this season.

Karnataka and Maharashtra will be playing against each other in Ranji Trophy final for the first time. They have played in the semifinal (1970/71) and quarterfinal (1975/76) earlier.

Maharashtra became the Ranji Trophy champion for the last time way back in 1940/41 whereas Karnataka’s last championship victory was in 1998/99. Both have a 50% win ratio in Ranji Trophy finals. Karnataka has won six out of 12 finals they played while Maharashtra won two of four.

Maharashtra have appeared in Ranji Trophy final four times. The last time they played a Ranji Trophy Final was in the season 1992/93 against Punjab which they lost by 120 runs. They became Champions twice (1939/40 and 1940/41) and Runner-Up twice.

The final of season 2013/14 will be the 13th final for Karnataka in Ranji Trophy History. In previous 12, they had won six and lost six. Their last final appearance was in 2009/10 against Mumbai which they lost by six runs.

Maharashtra began their 2013/14 campaign with an easy win at their home ground (Maharashtra Cricket Association Stadium, Pune) against Tripura. With three draws against Hyderabad, Goa and Andhra Pradesh, they were still contenders for the next round. Three wins in their next four games against Jammu and Kashmir, Kerala (drawn), Himachal Pradesh and Assam made them reach top of the Group C with a very good lead (35 points).

Maharashtra marched to the final of the Ranji Trophy 2013/14 with easy wins of eight wicket and ten wickets against Mumbai (in the quarterfinal) and Bengal (in the semifinal) respectively.

Karnataka, in Group A, had to draw their first three matches against Jharkhand, Gujarat and Vidarbha before winning the remaining five matches against Odisha, Haryana, Punjab, Mumbai and Delhi. All of their victories were by good margins — four wickets, three wickets, ten wickets, 160 runs and eight wickets.

Karnataka defeated Uttar Pradesh in the quarterfinals by 92 runs at their home ground — Chinnaswamy Stadium. Due to rain, the semifinal against Punjab at Mohali was drawn, but Karnataka moved to the final banking on the first innings lead.

Karnataka vs Maharashtra in Ranji Trophy

Karnataka have always been a more dominating team than Maharashtra in their encounters other than the first two encounters in 1948/49 and 1970/71 when Maharashtra were at their peak. This can be depicted from the below data which shows the head to head results between the two teams.

List of Matches between the two teams in the Ranji Trophy:

Records and Milestones to aim for in the Ranji Trophy final:

– If Karnataka wins the final then they will join Delhi as the second most number of Ranji Trophy Championships (seven) behind Mumbai’s 40 triumphs.

– Jadhav has also crossed the century mark five times this season. He is joint-second with 15 other cricketers who have scored five centuries in a season. Only Laxman (1999/00) has scored more centuries in a Ranji Trophy Season — eight.

– Lokesh Rahul (Karnataka) needs 127 runs to complete his 1,000 runs in this season.  He will become the second player after Vijay Bharadwaj (1998/99) to complete 1,000 runs for Karnataka in a Ranji Trophy Season. 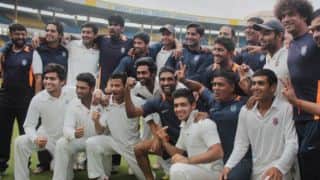 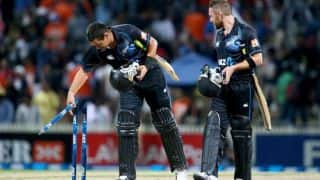