While Karnataka played brilliant cricket, Maharashtra have themselves to blame for.

Karnataka dominated Day Two of the Ranji Trophy 2013-14 final against Maharashtra at Hyderabad. While Karnataka played some brilliant cricket, Maharashtra have themselves to blame for, as they dropped a few chances and also did not capitalise on the platform built on Day One. As things stand, Karnataka have momentum on their side and have pushed Maharashtra to the corner.

Here are some of the standout moments of Day Two:

Ankit Bawne bowled through the gate

Ankit Bawne was the talk of the town after finishing Day One on 89 not out. With all eyes on him, he took strike to Abhimanyu Mithun to face his first ball of the day. Mithun ran in hard as usual and got it to move in precociously after pitching outside the off-stump. The ball went through the gate and crashed into the stumps, before Bawne could get his bat down. Little did anyone know that it was the start of a collapse that would help Karnataka back in the game.

Manish Pandey is a quick fielder and was taking a few slip catches in the pre-match practice session. Shrikant Mundhe and Sangram Atitkar were trying to get their eye in after Bawne’s early dismissal. But then, Sreenath Aravind, bowling his left-arm pacers, got Mundhe to edge to the slips. There was no second slip, so Pandey leapt in the air to his right from first slip and took the catch mid-air. Someone should have measured his air-time!

The Rajiv Gandhi International Stadium is miles outside the main city of Hyderabad. Expecting people to come for the game was unreasonable, especially when the home team isn’t involved in the contest. Yet, there was one supporter sitting near the dressing room, who cheered his team throughout. Waving the Karnataka state colours, gold and red, he first made his presence felt with a huge cheer after Bawne’s dismissal. That reverberated throughout the empty stadium!

Maharashtra’s fielding has been impressive throughout the Ranji trophy 2013-14, but on Day Two, they were below par. It all began with Harshad Khadiwale dropping a tough chance to his right when Lokesh Rahul was on zero. However, Rohit Motwani then failed to latch on to one to his right and that gave Ganesh Satish an early reprieve. Anupam Sanklecha dropped two off his own bowling; although it is never easy to catch in one’s follow through. However, the easiest of the lot was dropped by Atitkar at mid-wicket. Sathish flicked it straight to him, but he juggled and grassed it.

Ganesh Sathish gets his ton

Sathish hasn’t featured in all the games during the season and was brought into the mix for this important fixture. He played a fairly attacking hand and was determined throughout. When the spinners came on he was set, he used his feet well and set the tone for Karnataka to put up a huge total. Maharashtra were short of options, as Akshay Darekar had to leave the field and they tried out other options. Sathish cut the gentle medium pace of Atitkar behind point to get that ton and celebrated with his teammates cheering from the boundary. It was a indeed a special moment for him! 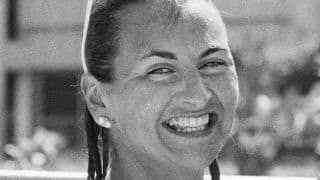