Ankit Bawne was the star for Maharashtra, while the Karnataka bowlers shared the honours.

Karnataka and Maharashtra engaged in an intense battle on Day One of the Ranji Trophy 2013-14 final at the Rajiv Gandhi International Stadium, Hyderabad. Ankit Bawne was the star for Maharashtra as they finished the day on 272 for five, while the Karnataka bowlers shared the honours. It was an intriguing contest as Karnataka kept striking when Maharashtra seemed to build a partnership.

Throughout the day, there were quite a few standout moments. Here are a few of them:

The left-arm medium pacer Sreenath Aravind started off bowling his usual. But then, he was also seen rolling his arm over as a left-arm spinner. Karnataka used Aaravind’s dual skills at repeated intervals, though it was the left-arm spinner who made a more significant appearance once the ball lost its shine. With his pace, he did get the big wicket of Vijay Zol. It was only later in the day that Aravind switched to his frontline option.

There is an element of flair and audacity with which Kedar Jadhav plays. When he walked into the big game, he announced himself with a few good strokes that raced to the boundary. Two shots stood out early on — a defensive push off fast-bowler Aravind went to the long-on boundary quite easily. Another one was half flicked, half driven through mid-on. It was a promising start and many felt he was on song for a lot more. Instead, he got a tickle down the leg-side and had to walk back.

Soon after he got to his half-century, Chirag Khurana seemed to be in very good touch and looked good for a lot more. He was looking solid and in a mood to attack at times. But, Gopal, the leg-spinner troubled him in one particular over as he edged it twice through the slips. On one occasion, Khurana was squared up as he awkwardly edged it. Not long after, when Karun Nair, the part-timer came on, Khurana may have licked his lips, but then he was trapped leg-before as he went for a sweep shot but missed. Nair celebrated his maiden First-Class wicket.

Crowd getting into the act

It was quite sad to see empty stands at the Rajiv Gandhi International Stadium at Uppal. Not many fans would fancy coming down as it is quite a distance from the main city. However, the sparse crowds did liven up the atmosphere in the afternoon. They randomly cheered the Karnataka players; perhaps unaware of how they looked. When Amit Verma came on to bowl, they mistook him for the frontline leggie Shreyas Gopal and kept calling the latter.

As the ball got older, Karnataka delayed the new-ball. But, they continued with the fast bowlers. When Mithun bowled to Atitkar, who was fresh to the crease, he was driven quite handsomely. Mithun overpitched  slightly and Atitkar punched it down the ground for four. Later in the over, they brought a silly mid-off, but Atitkar smashed one through the covers for four more. Ankit Bawne was not the only one to dominate late in the day. 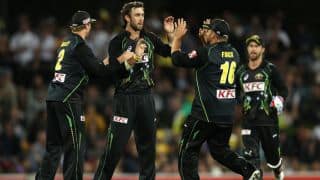