Maharashtra's journey to the finals has been the story of the season so far.

Maharashtra’s ascent in the Ranji Trophy 2013-14 has been remarkable as their players have performed in crunch situations and shared the burden of the pressure. Nishad Pai Vaidya examines a few statistics as Maharashtra brace for the final.

Maharashtra have been the surprise package of the Ranji Trophy 2013-14. From the lowest division of the tournament — Group C — they emerged to beat the giants in the knockouts to pave their way to the final. If one felt that their victory over Mumbai in the quarter-final was a flash in the pan, their outing against Bengal in the semi-finals dispelled all those doubts. It was a clinical performance that showed that their magnificent run is a fruit of hard work and planning.

If one looks at the statistics, one would find that Maharashtra have struck form as a team and have had numerous players contributing to their success. For any side’s consistent success, they need their players to rise to the occasion and play as a unit. The numbers also reflect an incredible balance in the side as the players have shared responsibilities to contribute to their success. Here is a look at their leading run-scorers this season:

If a team has five batsmen with over 500 runs in a season, it is bound to be a successful unit. What it shows is that the batsmen haven’t let the pressure get to them. There is also variety in the batting line-up. For example, a Kedar Jadhav is an attacking stroke-maker and can change the course of a game with a few aggressive strokes. But, at the top you have Harshad Khadiwale, who is patient and takes his time to build a good base.

It is also interesting to note that Vijay Zol is amongst their top five run-scorers despite missing out on a few games due to his India under-19 duties. Such a performance is incredible for a teenager in his debut season. Making the jump from the under-19 level to First-Class cricket is a leap and he has managed it quite well. What may have helped him is the fact that he made his First-Class debut while turning up for India A against New Zealand A last year; an encounter that saw him announce his arrival with a ton. No wonder they wanted him for the final even as he prepared with his under-19 mates for the big event.

It is that consistency that has been backed by the bowlers very well. They have defended the totals put up by the batsmen or even shot out the opposition cheaply to ensure Maharashtra dominate. Here is a look at their bowling records this season:

It is quite evident that no bowler has dominated as such and that the burden of taking the wickets has been shared. Akshay Darekar, their left-arm orthodox spinner has been in good form and is their leading wicket-taker. He has gone about his job quietly when compared to the fast-bowling pack, who have struck consistently. Samad Fallah, the left-arm swing bowler has been very consistent for a few seasons and has led this attack incredibly well. Even someone like a Dominic Joseph, who hasn’t played all their games, has performed whenever given the call. This is a sign of confidence in the unit and that they back each other to win.

In many ways, Maharashtra’s rise is similar to Rajasthan’s dizzying ascent during the 2010-11 season, when they went on to win the Ranji Trophy. That side was led by an experienced head in Hrishikesh Kanitkar, who was ironically Maharashtra’s former captain, and had the likes of Aakash Chopra and Rashmi Parida. Maharashtra have a very different setup as they have a very young side with their captain, Rohit Motwani, being all of 23 years. Irrespective of the result in the final, this may be the start of bigger things for Maharashtra cricket. 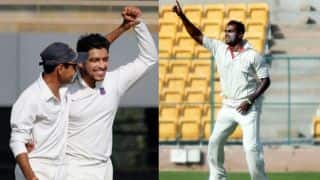