Here are the batting and bowling highlights from Day Two of Ranji trophy 2014-15 round 8.

The round eight of the Ranji Trophy 2014-15 are being held across India. While KL Rahul scored his first triple hundred becoming the first Karnataka batsman to score a triple ton in Ranji Trophy, Harshal Patel picked up six wickets.

Here are the batting and bowling highlights from Day Two of Ranji trophy 2014-15 round eight.

KL Rahul scored 336, his first triple hundred and thus becoming the first Karnataka player to score a triple ton in Ranji Trophy. He went past Gundappa Viswanath’s 247 which was the previous best by any Karnataka batsman against Uttar Pradesh before today.

Paras Dogra’s fifth Ranji Trophy double hundred. The Himachal veteran was not out on 204 along with skipper Bipul Sharma, who scored 119 not out, the latter’s highest score. Himachal declared their innings at 535.

Aditya Tare’s 127 was the saving grace in Mumbai’s batting against Baroda. Apart Shrideep Mangela, who scored 55, and skipper Tare, none of the Mumbai batsmen scored beyond 25.

Harshal Patel’s six-wicket haul skittle Rajasthan for 180 against Haryana’s first innings score of 373. Rajasthan were asked to follow on.

Despite Vidarbha scoring 370, Delhi’s Shivam Sharma took five wickets and had an economy rate of 3.29.

Shrikant Wagh and Rakesh Dhruve of Vidarbha picked up four and three wickets respectively to leave Delhi reeling at 133 for the loss of eight wickets.

Apart diminishing Punjab for 167, one would have expected Odisha to take advantage of the opportunity and put on a big first innings total. However, Siddharth Kaul’s five-wicket haul bowled out Odisha for 183.

Mumbai’s batsmen could not put up a big first innings total. However, that did not stop the team from putting up a good bowling display. Balwinder Sandhu and Harmeet Singh picked up four wickets each as Baroda were all out 184 in the first innings. 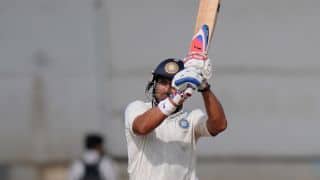