Let us analyse how some of the top names fared on Day One of the quarter-finals round:

Playing his 100th First-Class match, Vinay’s decision to bowl first proved to be a master-stroke. He led from the front dismantling Mumbai’s top order in the first half hour itself. Vinay became the fourth bowler to claim two hat-tricks in Ranji Trophy. In addition, he became the seventh Karnataka bowler to register hat-tricks.

Vinay wasn’t done yet. He later achieved a 5-for (22nd overall in FC) and ended with 6 for 34. In process, Vinay also joined the list of top ten wicket-takers in the tournament’s history.

Mumbai bank upon the youngster to provide a flying start. He has been given full license to take on the bowlers from the word go. Nonetheless, he was found wanting against an in-form and consistently-hitting-the-deck bowler in form of Vinay. The Karnataka skipper dismissed him 2.

It was just another day in the office for Agarwal. There seems to be no stopping the right-hander who has amassed over 1,000 runs in November (in the ongoing tournament). He looked rock solid, was timing the ball with the middle of the blade and was undeterred from taking the aerial route. Agarwal added 83 runs for the first wicket, with Ravikumar Samarth, and remains unbeaten on 62.

In Madhya Pradesh versus Delhi, MP were reduced to 69 for 2. Naman Ojha, at No. 4, added vital stands with half-centurion Ankit Dane and skipper Devendra Bundela. He was on course of weathering the storm before falling for 49. He did get a start, but the team required much more. At stumps, MP are reeling at 223 for 6. Ojha would be gutted to fall against the run of play.

Bengal skipper was expected to score big in the knockouts. Nonetheless, Tiwary failed to provide much impetus perishing for 1 to Gujarat’s Chintan Gaja. Just like Naman, Tiwary’s failure has left Bengal in a fix; 261 for 6. Big games brings out the best from a top player, but it went the other way round for the 32-year-old.

In a rain-marred opening day of Kerala and Vidarbha tie, the latter are struggling at 45 for 3 at stumps. Vidarbha owe a large part of their success, in the ongoing season, to their top order. Fazal is their leading run-scorer, but ditched his side on Thursday. With their top 3 back in the hut, Fazal would be disappointed with his team’s start. 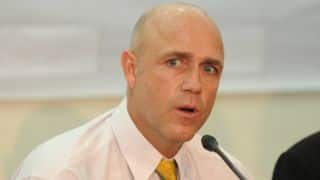