Irfan Pathan, Jammu & Kashmir's player-cum-mentor, on the health of the state's cricket and what needs to be done.

As Jammu & Kashmir get set to open their campaign in the 2018-19 Ranji Trophy season against hosts Rajasthan in Jaipur from November 1, Irfan Pathan believes the team can make good progress. Having joined the J&K setup earlier this as player-cum-coach, after parting ways with Baroda after 18 seasons, Irfan has helped identify talent in the region and was part of the side that competed in the recent Vijay Hazare Trophy.

He spoke to CricketCountry ahead of the Ranji Trophy opener on the health of J&K cricket and what needs to be done.

Being a player and mentor poses its own challenges. How do you view it?

As far as being a mentor, it is nothing new to me because for the past several seasons with Baroda I was a senior, or what you can term a mentor, to the bowlers. I am used to that role. Yes, here the role also includes scouting talent so in that sense it is different. I was brought on board to help identify and groom cricketing talent in Jammu and Kashmir and it has been a fulfilling role so far.

I must give credit to the CEO of the Jammu & Kashmir Cricket Association (JKCA) Mr Aashiq Bukhari, Justice CK Prasad and the head coach Milan Mewda for their vision and hard work and support to me since I have joined the setup. We have a lots to do, it will take a lot of time, but we are confident.

What is the health of J&K cricket?

It is good, in terms of enthusiasm and talent. There are many talented cricketers here, and we need to give them the platform to enhance their skills and make it to state level, for starters.

I spent two months in the valley before the season began. We scoured the region and held camps and a tournament, where we had 22 teams from around the region, and at least 34,000 people if not more watching. The level of talent here is not amazing, but what is lacking is infrastructure and stronger belief that cricket can succeed.

Obviously there is Parvez Rasool who is the face of J&K cricket, he s played for India. If there was a stronger system in place here, he would have played more for India. Then there is Shubham Khajuriya, Ian Dev Singh and Mohammed Mudhasir and also Manzoor Dar who got an IPL contract this year with Kings XI Punjab. If more players get exposure and success, cricket in J&K will grow.

For however long I am officially associated with J&K cricket, and even afterwards, I will back this team.

What are the areas of concern?

As I said, infrastructure is a problem but the JKCA is working on it. The challenge here is getting turf wickets. There are mostly matting wickets, only a few turf wickets. Work is on. It will take time. Since mostly T20 tournaments are played in J&K, I suggested that we get 40-over tournaments to start with and then two and three-day tournaments to prepare players for four-day cricket. The passion is high, the talent is there. Coaches are there.

There is a lack of spin bowlers too, which we are working on. It is tough to produce on matting wickets. The ball often stays low and there is inconsistent bounce, so you cannot judge a spinner s quality properly and then when he goes and bowls on turf pitches he struggles.

From a player-cum-mentor s perspective, I have seen that the mental aspect has to be worked on. By mental I don t mean just being positive, I mean knowing what it takes to train properly, what it takes to conduct yourself on the field, what it means to close out key moments in matches. That is something which obviously comes with exposure and success, but when you look at a team like J&K and compare it to Mumbai, Delhi, Karnataka and all big centres, even Baroda, they are behind. The problems in J&K cricket have been well documented, I don t want to get into the past. The current JKCA is working to improve our cricket. It will happen, slowly.

In the Vijay Hazare Trophy the team finished seventh out of ten teams in Group C. What were the positives?

We played several matches in Chennai where the wickets were low and turning. It wasn t easy. I am not offering any excuses. We should have won more matches. We had some close games and then we won our last three games. These were tough wins, one of which came over a very strong Tamil Nadu team which had Murali Vijay, R Ashwin, Abhinav Mukund, Vijay Shankar and Washington Sundar. These are India players, IPL stars. I say positives because I saw the spark in some players. The issue is how to close out matches from tough situations and also not to lose focus when matches are in our control.

That win over Tamil Nadu came with four wickets and three balls left. What does a team take away from a narrow win like that?

We should have won that match earlier. We were in control of the chase but then lost wickets. But the belief that we can win such matches is there and if we encounter such situations again, the players will be more certain. I saw the positives from such wins. So much of cricket is about mental strength. Part of my role is helping the players become mentally tougher.

What has your association with Parvez Rasool been like?

Its been fantastic. He is a wonderful guy and a fine cricketer. To be able to talk to him and pick his brains has been a big plus point. He has a pulse for cricket in the region, of course. He is the biggest name in J&K cricket and to see the adulation he gets is special. He has played for India and in the IPL and that has given cricket in J&K a facelift. People want to play cricket more now after seeing Rasool s success. He has a big role to play not just within the team but for J&K cricket, broadly speaking.

Who do you have high hopes for this season?

I will not take any names, even though there are four of five guys I have big hopes for, because I do not want anyone to feel undue pressure or others to feel anything towards them. We are a team and a family and we are all working collective to one goal – to compete hard in the Ranji Trophy. Only once in J&K history have we made the knockouts. We have to improve that record.

This squad has talent, believe me. The guys are pumped up, we have trained hard and we are ready. There were a lot of positives during the Vijay Hazare Trophy, some good innings and good bowling on tough conditions. If the players perform to potential, I hope to be proved right and then you will see the names I am referring to.

Will you back players even if they don t perform in three or four games?

We have to. That is the way forward because we cannot allow insecurity to creep in. That is not helpful for taking J&K cricket forward. I will give you the example of a young batsman, Shubham Pundir, in the Vijay Hazare Trophy. In the first five games he did not score at all, but we knew his potential and backed him. His highest score was 30 and it came after five poor games, in the important win against Tamil Nadu. It was a vital 30. In the next game which we won against Assam, he got another crucial score which was not big but helped us.

That said, we cannot have players assuming that their places are there despite not performing. It is a fine line. We need to give players confidence that they will not be dropped after two-three matches, but you need to be hardworking and perform to your abilities. 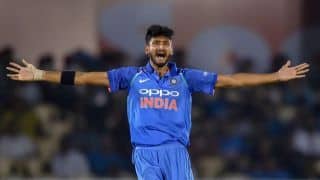