Bist on the state of cricket in Rajasthan, what is required to improve it and the emergence of pace bowler Khaleel Ahmed into the Indian team.

Robin Bist is ten games short of playing his 100 first-class match, a milestone countless batsmen have dreamt of but not all have managed. He has been a pillar for Rajasthan cricket since making his shift from Delhi in his teenage years, and was a member of the team that won the Ranji Trophy in successive seasons (2010-11 and 2011-12).

Ahead of the 2018-19 Ranji Trophy which gets underway across the country on November 1, the 30-year-old spoke to CricketCountry on the state of cricket in Rajasthan, what is required to improve it, his journey to 90 first-class games and the emergence of pace bowler Khaleel Ahmed into the Indian team.

Rajasthan finished second last in their group during the recent Vijay Hazare Trophy. How does the team pick itself up from that?

It s a new format, with new venues and the wicket in Jaipur are much better than what we got in Chennai during the Vijay Hazare Trophy. Those were pathetic wickets, rank turners. We ve done better in the Ranji Trophy as compared to limited-overs cricket. We are playing for pride. The state of Rajasthan cricket for many years is well documented, the political infighting and factions that have come up. It s not a healthy environment to play cricket in, or to nurture talent, but we have a job to do and we are going to give it our best. Our endeavour is to take Rajasthan cricket forward, despite the setbacks.

Pankaj Singh has moved on, Vineet Saxena has moved on. How do you plug those massive gaps?

It will be tough. The problem is that the balance between seniors and young talent has tone there. Personally, I take it as a challenge. The target is to win the Ranji Trophy. We have a new captain, Mahipal Lomror, who s young and very talented. The men who matter have chosen to give him the captaincy, which we hope can infuse some positivity into the team.

I believe Mahipal can be a good captain. He has a spark, and hopefully he keeps scoring runs and taking wickets. He didn t get a lot of runs last season but the cameos stood out. It is a challenge being a captain at his age, and here is where having seniors really matters. The players with a couple of seasons of experience mix with those who are 30, 35 years old and that is important.

Having seniors, and professionals as the term goes, is vital to a team s set up.

Absolutely. You need to have experienced players. If a bunch of young players gets into a pressure situation, there s more chances of them choking. You pick any big domestic team Mumbai, Karnataka, Delhi it is the experienced players that have made the difference. When Rajasthan won the Ranji Trophy twice in a row, it was the seniors that bailed us out of tough situations. When we choked, it was Hrishikesh Kanitkar, Aakash Chopra and Rashmi Parida that stood up. Parida was our crisis man, it is no secret. I have played 90 first-class matches, Ashok Menaria has played around 70, and even when runs dry up, that experience has to be valued.

Equally, you need to groom young players in the proper manner while you are backing the experienced ones through thick and thin. Preparing the next level of players is important. You will have successful players at the Under-19, and Under-23 levels, but you cannot suddenly throw them into first-class cricket. Sure, it may work now and then but it cannot be your method. Especially when you throw out seniors because you suddenly see a youngster score a century. Pick any major domestic team, and you will see that the ones with a solid senior base are the most successful. One or two may buck this trend, but overall it is experience that wins you more matches. Look at Vidarbha last season – in the back end of the Ranji Trophy it was Wasim Jaffer and Ganesh Sathish who stood up, right?

You started playing cricket in Delhi, then moved to Rajasthan for more opportunities, won the Ranji Trophy two seasons in a row, later shifted to Himachal Pradesh for two seasons and then returned to Rajasthan. Where does Rajasthan cricket stand?

It is not in a healthy position. That is the sad truth. There is a lot of upheaval required but due to various reasons it has not been possible. There is only so much the selectors can do. The camps are not sufficient for sustained success. The pitches, barring Jaipur s, need serious improvement. Players have to deal with balls that hit them in the stomach and on the arms and then ones that shoot past your feet. I don t want to sound negative but this is the reality. As players we have to rise above this and deliver. It is tough, but we are working at it. There are insecurities: are my feet and hands moving correctly? Is the ball coming out properly and landing in the right spot? Will I be able to take catches on certain grounds?

Rajasthan cricket has not progressed since 2012. We won back-to-back Ranji Trophy titles. We still lack infrastructure. That two fast bowlers in Khaleel Ahmed and Deepak Chahar have broken into the Indian team is terrific, despite all the setbacks. We lack spinners in Rajasthan, which is a big factor.

Indeed, one of the few bright spots for Rajasthan has been the emergence of Khaleel from the U-19 World Cup squad two years ago into the India A team and now Indian team, as well as that of Chahar who has played for India this year.

Khaleel is a very fine talent. I ve seen him from the time he stepped into the system. A few misconceptions were spread about Khaleel. He took four wickets in his first match and was told to start bowling bouncers. But thats not his strength. Pitching the ball up and getting swing is. He kept saying that he would get wickets by pitching it up but the boy was told to bang it in. It could have discouraged him, but to his credit he didn t relent. Today he is playing for India. I am happy for him.

Deepak is a smart bowler, with a good cricketing brain. He will do well. I wish both of them come back to play for Rajasthan so they can pass on their experience of playing international cricket to the youngsters. That would be beneficial.

Do you see yourself as captaincy material at this level?

I have captained at the club level. Over the last three seasons we have played 18 tournaments and won 13 or 14 under my captaincy. People don t always see how attacking a person leads. When we played the Challenger Trophy, we had the weakest bowling attack but not one opposition batsman score a century against us. Much better bowling attacks conceded centuries to batsmen. From a young age I have captained teams. I captained Delhi at the U-17 level. The added responsibility improves by batting. I believe I have a lot to offer Rajasthan cricket as a captain, but for some reason or another the opportunity has not come my way.

Look at Jharkhand. Ishan Kishan is now leading them. He had a lot of runs under his belt, so it made sense. There is a trend to make young players captains. If he is deserving, why not? If he has played match-winning knocks again and again, make him captain. To bring about change you don t need to force changes unnecessarily. If you are serious about making changes, bring in a person who can actually influence changes. Experiments won t bring about the necessary changes.

Never. Its all thanks to god, my father and coaches. I had a dream to play for India, which pushed me out of Delhi and to Rajasthan. Maybe politics had a role, maybe bad luck I got injured while playing for India A in the West Indies maybe it was not meant to be. After 90 matches my average if around 47, which gives me immense satisfaction.

The non-selection hurt. I have spoken to a certain selector and asked why I was not selected in the past. He had his views. He gave me stats of another batsman who went on to play for India, and gave me his batting average during one Irani Trophy. I reminded him of mine, which in that season was 99.94. I am still around after 90 first-class matches, have won the Ranji Trophy twice and got a chance to represent India A. I believe I have helped Rajasthan cricket grow. People know that if I score for Rajasthan, the team will do well. My hard work has been appreciated. I am content. 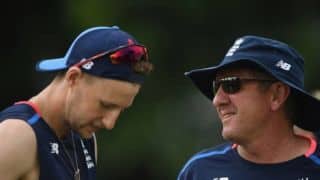