Going up against a team of Vidarbha s calibre, Saxena believes that to beat the best team in the country, they have to play their best cricket.

While it is a big achievement for Uttarakhand cricket team to make it to the quarter-finals of the Ranji Trophy in their debut season, domestic veteran Vineet Saxena knows all too well about successful campaigns in India s premier domestic competition. After all, he is a two-time Ranji Trophy winner with Rajasthan. (ALSO READ: Uttarakhand deserve the promotion, says captain Rajat Bhatia)

Yet, for Saxena – playing as a professional for Uttarakhand alongside former Delhi player Rajat Bhatia and Tamil Nadu player Malolan Rangarajan – the success of this nascent team is utmost satisfying. (ALSO READ: Rajat Bhatia wants Uttarakhand to continue dominance)

Experience matters a lot, because these guys are new to First-Class cricket and it was very important to guide them and show them how to go about things at this level, Saxena tells CricketCountry.com.

And I think we have been successful in that regard and it is satisfying as well. As a professional we play not just for ourselves, but try and uplift the game of the local players as well, so it feels really good that the team has done really well. (ALSO READ: After Rajasthan snub, Vineet Saxena hopes to make a mark with debutants Uttarakhand)

Uttarakhand staved off stiff competition from Bihar from Plate group to reach the knockouts of the Ranji Trophy 2018-19 season and after missing out on the knockouts in the Vijay Hazare Trophy 2018-19 – losing only to Bihar – Saxena say the team knew every game would be crucial.

It has been a very good season for all us, qualifying to the quarter-finals was one of the aims and we took every game as it came. We were not complacent after winning the initial matches, we knew each game was very important, says Saxena, who has 7605 First Class runs in 128 matches. (ALSO READ: After 6/13 on Ranji Trophy debut, Uttarakhand s Deepak Dhapola focused on job at hand)

The opener however does concede that the team had a special interest in their opening fixture against Bihar.

It was indeed a big win against Bihar, he says, adding, In the Vijay Hazare it was the first match we played as a team (vs Bihar). Unfortunately, we didn t play a single practice match before that. It was as not easy for the coach and captain to know the team combinations; but after (losing) that game, we realised how important that game was. And coming in to the Ranji season, it was clear that the first game will be very crucial for us, because Bihar is a good team and beating them with a bonus was a great start for us.

After beating Bihar with the bonus point, Uttarakhand claimed three more wins on the trot – two of them with bonus points – and finished the league stage with yet another win against Mizoram to seal the top spot in the group.

While youngsters – pacers Deepak Dhapola, and Sunny Rana; middle-order batsmen Saurabh Rawat and Kartik Joshi – impressed in the early goings, the experience hand of Saxena and Bhatia came to the fore as the season progressed with the duo becoming the highest run-getters for the team. Bhatia in eight matches has 700 runs at 175, while Saxena has so far accumulated 513 at 85.50.

Initially, we were playing just one innings, so the first three innings were not good for me, but others were contributing, and for me I knew if I get a start I will make it count and that happened against Meghalaya – we had lost four wickets also – and so once I got set and with Rajat at the other end, we did well, says Saxena.

Up next, in the quarters, Uttarakhand will be up against defending champions and Group A and B toppers (combined) Vidarbha – and they will be without their captain. However, Saxena feels it is an opportunity to for someone else to step up.

That gap (Bhatia s absence) is very difficult to fill, says Saxena. But it is an opportunity for a young guy to step in and everyone else to shoulder the responsibility.

And going up against a team of Vidarbha s calibre, Saxena believes that to beat the best team in the country, they have to play their best cricket.

As of now we have not had any team talks (ahead of the match), but it is clear that if you are playing the best team in the country, you will have to play your best cricket possible, he adds.

In Bhatia s abence, Saxena will most likely lead the side against Vidarbha in quarter-final match, starting January 15 at the Vidarbha Cricket Association Stadium, Jamtha, Nagpur. 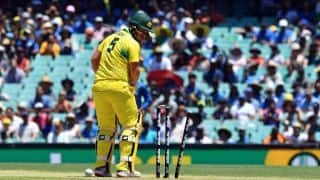