The challenge of getting the best out of a group of players with very limited exposure of cricket at this level is one the former Mumbai captain relishes.

Abhishek Nayar, the former India allrounder and one-time Mumbai captain, is one of many domestic stalwarts who have switched sides this year, playing for one of the nine new teams in the ongoing domestic season.

Nayar says that nothing has changed for him personally after making the shift from Mumbai to Puducherry, but the challenge of getting the best out of a group of players with very limited exposure of cricket at this level is one he relishes.

To be honest, it is quite normal for me as I am playing cricket regularly in terms what you have to do as a cricketer is the fact that you have to learn to adapt, Nayar tells CricketCountry ahead of the upcoming Ranji Trophy season starting November 1. But something I am really enjoying is interacting with these guys who have not played a lot of cricket and also to try to get the best out of them and it has been very interesting for me.

Nayar, who was omitted for Mumbai s off-season fitness camp in June, is set to play his 100th first-class game for Puducherry against Meghalaya in round two of the Ranji Trophy. The fledging team, one of nine added to the domestic fold by the BCCI this year, lost just one game – to Bihar – and finished third in the Plate Group. Nayar is happy with his team s performance, especially after the BCCI cancelled the registration of eight Puducherry players for flouting eligibility criteria.

Skill-wise it is a very young side and there is a long way to go, he says. The kind of team we first came with, they beat a team from Mumbai in the Vizzy Trophy ahead of the Vijay Hazare. We did pretty well as a team, despite what all happened, just losing one game and finishing third.

The addition of nine teams, after the Supreme Court-appointed Committee of Administrators gave the green signal, has seen the total number swell to a whopping 37. Nayar believes this will help cricket grow across India.

I think the hope is that cricket develops in the area and the sport grows in all parts of India, which is why states have been given the opportunity. It is an opportunity for player from these areas come through as well, says Nayar, who played three ODIs for India in 2009.

While the Vijay Hazare Trophy was the initiation for Puducherry s players in to the domestic setup, the real test awaits in the form of the Ranji Trophy. Nayar underlines the importance of professional players in the team, including himself, to step up and help the homegrown talents.

Most teams had a lot of experienced guys migrating, we also have had three pros and I think they did pretty well, our professionals stood up [in the Vijay Hazare Trophy]. In this league, besides Uttarakhand and Bihar, most teams are at the start of their development, he says. In terms of cricket, it all depends on how the pros are in the team, and the performances revolve around them. We hope that younger breed learn from this and in two-three years, they come up with good performances.

The 35-year-old also reveals that Puducherry is trying to rope in more outstation players ahead of the Ranji Trophy. It would be interesting to see, we have got two players from Kerala and any team that plays well can beat anyone in the group, says Nayar, who along with Himachal s Paras Dogra and Rajasthan s Pankaj Singh form a strong trio of professional players in the Puducherry set-up. 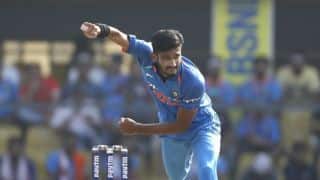