Gambhir, who scored 44 and 49 in the opening game, is suffering from a shoulder niggle and had excused himself from this away encounter.

Hyderabad: Having missed out on a golden opportunity to log full points in the opener, Delhi, sans senior stars Gautam Gambhir and Ishant Sharma, will face Hyderabad in an away encounter of the Ranji Trophy 2018-19 season from Tuesday.

Delhi failed to win outright in their opening group league match at home against Himachal Pradesh and Hyderabad were no better, having conceded first innings lead in both their matches.

However, Delhi will miss Gambhir more as they were always aware that Ishant was available for only one match as per BCCI’s specific workload management programme.

Gambhir, who scored 44 and 49 in the opening game, is suffering from a shoulder niggle and had excused himself from this away encounter.

“It’s always nice if an experienced player like Gautam is around. He will certainly be missed as he also guides the juniors. But at the same time, I would look at it as an opportunity where a junior player will get a chance to make a mark,” Delhi coach Mithun Manhas told PTI on Monday.

“There is still a bit of grass cover on the pitch and let’s see how it pans out tomorrow. We will take a call on the playing XI tomorrow,” the coach said.

While the coach didn’t reveal who will be Gambhir’s replacement, it was learnt that Sarthak Ranjan is expected to open the innings along with Hiten Dalal.

While Hyderabad will not have pace spearhead Mohammed Siraj [on India A duty] in their ranks, Delhi’s opening pair, with a collective experience of one first-class game, could be a worry for young captain Nitish Rana.

Rana and Himmat Singh will be aiming to come out all guns blazing against the likes of left-arm spinner Mehidy Hasan and pacer M Ravi Kiran before they also leave on national duty [for Emerging India in U-23 Asia Cup].

There could be a couple of more changes in the playing XI with Ishant being replaced by either Gaurav Kumar or Simarjeet Singh. The two left-arm spinners Varun Sood and Vikas Mishra looked pedestrian on a helpful fourth day track at the Kotla.

With off-spinner Pulkit Narang in the squad, Rana might be tempted to drop one of the two slow left-arm orthodox from the playing XI. 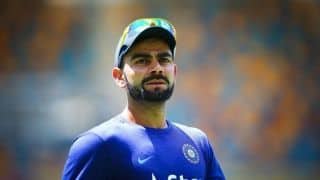 Virat Kohli is doing all he wants, and we are letting it happen: Bishan Singh Bedi 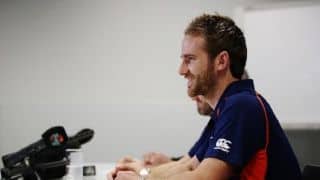