Rashid Latif is a former Pakistan wicketkeeper-batsman, who played for the Pakistani national cricket team for over a decade between 1992 and 2003.

Born October 14, 1968, Rashid Latif is a former Pakistan wicketkeeper-batsman, who played for the Pakistani national cricket team for over a decade between 1992 and 2003. A technically sound wicketkeeper, Latif was also a proper batsman and was interestingly picked for the national team first as a batsman. Controversy s favourite child, Latif remained in the news for the wrong reasons throughout his career. He even captained his side and later coached Pakistan and Afghanistan at international level. On his 49th birthday, Chinmay Jawalekar recollects 15 facts about the player, who competed with Moin Khan for a spot in the XI virtually all his career.

1. Early life: Latif was born in Karachi to a Muhajir Family. Muhajir is a term used in Pakistan to describe Muslim immigrants and their descendants of multi-ethnic origin who migrated from different regions of India after the Partition in 1947.

2. Saeed Anwar s classmate: Latif completed his Bachelor s degree in Computer System Engineering from NED University of Engineering and Technology with Saeed Anwar, with whom he remained best of the friends for years to come.

4. Competition: All through his career, Latif was involved in a tight competition with another great wicketkeeper of his generation, Moin Khan for the wicketkeeper’s position in the Pakistan team. Though Moin ended up playing more number of Tests and ODIs than him, the general opinion was that Latif was a better keeper than him.

5. Impressive Test debut: Latif made his Test debut in 1992 against England and scored his maiden fifty in the first ever innings at the international level. He also made his One-Day International (ODI) debut a couple of weeks later and scored 29, the second highest individual score in Pakistan s innings, in his side s loss.

6. Whistleblower: In the middle of Pakistan s Zimbabwe tour in the year 1994-95, Latif announced his retirement from the game. The announcement came after his conflicts with some players, particularly Saleem Malik, and the team management. He, along with Basit Ali, had made allegations of match-fixing on Malik and a few other Pakistan players. When summoned as witness by the Justice Malik Mohammad Qayyum Commission, Latif mentioned that Malik had actually approached him to lose a match deliberately .

Latif also alleged that the likes of Wasim Akram and Waqar Younis too were directly or indirectly involved in fixing. He even claimed that Indian players like Mohammad Azharuddin, Ajay Jadeja, Venkatpathy Raju, Navjyot Singh Sidhu et al would often call him up at his residence and ask about things such as nature of the pitch etc.

7. Captaincy: He returned to the Pakistan team and became the captain of the National side in 1998. However, after just 3 Tests and two ODI series , Latif was sacked as captain and dropped from the team. To sum up the events of the season, a retired Latif was recalled, made captain without any apparent reason after 3 ODIs in which he had failed, and then dropped from the side altogether, and was not considered for 3 years.

8. Trivia: On his captaincy debut, Latif became only the second captain in the history of the game to be dismissed for a pair of duck against South Africa. The only other captain who achieved the same embarrassing feat was Australia s Mark Taylor.

9. Comeback: He was recalled to the national side in 2001 and after a string of impressive individual performances and team s collective failure at the World Cup 2003, he was reappointed the captain of Pakistan. Wasim, Anwar and Waqar had retired after the tournament. Inzamam, Shoaib, and Saqlain were axed, leaving Pakistan without a leader. And thus, Latif came at the helm.

10. Ban: In 2004, a six-month ban was imposed on Latif by the PCB. He had conceded a domestic match on the grounds of pitch being dangerous to play, an act which attracted PCB s wrath. While rules suggested that a match can be abandoned, it was alleged that Latif, as captain of Karachi, did not follow the correct procedure. The ban was later reduced by five months.

11. Suspension: In the second innings of the final Test against Bangladesh in 2004, Latif earned flak from all quarters for claiming a illegitimate catch of Alok Kapali. The batsman was given out as Latif claimed a clean catch but it was however taken after the ball had bounced. Latif was suspended and later dropped from the team. Inzamam replaced him as captain while Kamran Akmal as wicketkeeper.

12. Racial abuse: Earlier, in 2003 during a world cup game against Australia, Latif was accused of racially abusing his Australian counterpart Adam Gilchrist. The incident happened during Pakistan s innings when Latif turned around to Glichrist and reportedly shouted an obscene racial remark. Gilchrist informed about the same to his team management, which in turned reported the matter to the match referee Clive Lloyd.

13. ICL and the RLCA: Post retirement, Latif also got involved with the rebel Indian Cricket League (ICL). Later, in 2009, he inaugurated his academy, the Rashid Latif Cricket Academy (RLCA) in Karachi. Though it was operational since 2000, a formal inauguration only happened in 2009.

14. Coaching: He was first appointed as the Pakistan wicketkeeping coach in 2008 but resigned after 5 months after fallout with Pakistan Cricket Board (PCB). However, he withdrew his resignation soon after. Later, he took up the batting coach s role with Afghanistan cricket team in 2010 and was subsequently promoted to the head coach s role.

15. Pakistan Super League (PSL): Latif is currently one of the members of the Advisory board of the PSL as well as director of his hometown s franchise, the Karachi Kings.

16. The unwanted controversy: Irked by Virender Sehwag’s banter tweets on Pakistan, Rashid Latif posted a distasteful video. The controversial video was criticised across India. Sehwag retorted with a tweet, “A meaningful silence is always better than meaningless words.”.

However, in the end, Pakistan had the last laugh when they beat India to lift the Champions Trophy a few days after this. 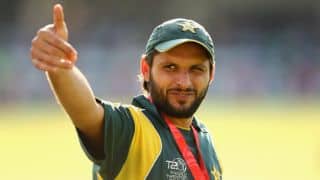