Ravichandran Ashwin is India's leading spinner in the post-Anil Kumble era. Though initially looked at as more of a T20 bowler, Ashwin has since blossomed into a terrific Test bowler as well.

Ravichandran Ashwin, born September 17, 1986, is India’s leading spinner in the post-Anil Kumble era. Though initially looked at as more of a Twenty20 (T20) bowler, Ashwin has since blossomed into a terrific Test bowler as well. Ashwin contributes to the team in every discipline; his dependable batting and secure slip fielding makes him an excellent all-rounder. On his 29th birthday, Shiamak Unwalla lists 16 interesting things to know about the man who has held the torch of Indian spin bowling aloft.

There is some confusion regarding the real name of the man we all know as Ravichandran Ashwin. His father’s name is Ravichandran, and his name is Ashwin. Perhaps calling him R Ashwin will be best.

2.  Cricket in his blood

Ravichandran, who worked for Southern Railways, played club cricket for Egmore Excelsiors for over a decade. It was for the same club that Ashwin would make his early cricketing strides.

Ashwin’s mother Chitra was quite strict regarding his studies. While both parents supported Ashwin’s cricketing career, they were firm about his education as well. Chitra told Mid-Day, “We never compromise on education, and Ashwin was mature enough to accept that.”

One of the reasons Ashwin is such a good lower-order batsman is that at the start of his cricketing pursuits, he was an opening batsman. Facing a new ball for a bulk of his early days ensured that his technique is more than impressive for someone who bats so low down the order.

The major reason for Ashwin’s batting taking a back seat was due to a severe injury he picked up as a teenager. When he was 14, Ashwin injured his pelvic area. The horrific injury resulted in a tear in the ligaments between his hip bones. This caused blood to leak into the bone joints, diffusing them. Chitra said of the injury, “He would have had implants which would have put a halt to his cricket career. Luckily, we sought second opinion from another orthopaedic doctor…We had to put him in bed rest for two months, and he was out of action for almost eight months. Even after that, he was limping for some time.”

The injury turned to be a blessing in disguise for Ashwin. When he got back to the game, he found his opening spot had been taken so his mother Chitra suggested he try his hand at spin bowling. The rest, as they say, is history.

Though it probably did not affect him too much, Ashwin did not get to enjoy the sole spotlight on any of his three international debuts. He shared his T20I debut with Virat Kohli and Naman Ojha, his ODI debut with Ojha and Pankaj Singh, and his Test debut with Umesh Yadav.

8.  Impressive on all debuts

Ashwin’s skills came to the fore in each of his three debut matches. He took 1 for 22 in four overs against Zimbabwe (getting the wicket of Tatenda Taibu) in his first T20I, which India won easily by six wickets. Though India lost the match in which Ashwin made his ODI debut (against Sri Lanka), he impressed both with bat (38 off 32) and later with the ball (2 for 50 in 10 overs). But it was his Test debut that would have truly surprised those who thought he was not cut-out for the longest format.

Playing against West Indies, Ashwin took 3 for 61 in the first innings (he dismissed Darren Bravo, Marlon Samuels, and Ravi Rampaul) and then snared 6 for 47 (adding the scalps of Shivnarine Chanderpaul, Kieran Powell, and Fidel Edwards to the same men he took out in the first innings). Ashwin finished with match figures of 9 for 128, second only to Narendra Hirwani’s 16-for on debut. He also became the third Indian to win Man of the Match on Test debut. Co-incidentally, Shikhar Dhawan and Rohit Sharma emulated him to win Man-of-the-Match awards on Test debut.

Had it not been for Ashwin and Rohit, Sachin Tendulkar’s penultimate Test could have ended quite differently. After West Indies were bowled out for 234 (Ashwin accounted for Chanderpaul and Veersammy Permaul) in the first Test at Eden Gardens in 2013, Shane Shillingford reduced India to 156 for 6 before Ashwin joined debutant Rohit. The duo put on a fantastic 280 runs for the seventh wicket; an Indian record. India finally got to 453, and India bowled out West Indies for 168 (Ashwin took three more wickets) to win by an innings and 51 runs.

The first Test of the 2013 Border-Gavaskar series in India was played in Ashwin’s hometown, Chennai. He responded wonderfully to his home ground, taking 7 for 103 in the first innings before MS Dhoni (224) took centre-stage. Opening bowling in the second innings, Ashwin responded with 5 for 95, as India were left with a mere 50 runs to win, which they did with eight wickets remaining. It was Ashwin’s second-ever Test 10-wicket haul but what made it all the sweeter was that it came at his home ground. Even more significantly, he became the first Indian bowler to take 10 wickets in his hometown.

Kumar Sangakkara may have terrorised bowlers for over a decade, but in the dying moments of his career he succumbed to Ashwin repeatedly. Sangakkara’s final Test series came against India at home in 2015. He played only the first two Tests, at Galle and P Sara Oval, Colombo. However, the Sri Lankan maestro failed to get to a half-century any of his final four innings, succumbing to Ashwin on all four occasions. Ashwin became the only bowler in history to dismiss Sangakkara in four successive innings.

One of the most astounding facts about Ashwin is that 36 Tests into his career, he has won the Man of the Series award six times. As cricket statistician Bharath Seervi points out, Richard Hadlee and Imran Khan both had eight Man-of-the-Series awards each in 86 and 88 Tests respectively (although the Man-of-the-Series awards were not very common in that era). Ashwin’s tally of six such awards in 36 matches comes at a better rate than even them and this is also the most number of man of the series award received by an Indian cricketer.

Ashwin is the joint fastest (with Ian Botham and Jack Gregory) to the double of 50 wickets and 500 runs. All three men got to the landmark in their 11th Tests. Ashwin’s impressive all-round skills can be further defined; among all Indians with the 100 wicket-1,000 run double, Ashwin’s batting average of 34.26 is second only to Ravi Shastri, while his bowling average of 25.20 is the best. This makes his overall numbers better than the likes of Kapil Dev, Vinoo Mankad, and Anil Kumble.

Ashwin was conferred with an Arjuna award — India’s highest sporting honour — in 2014. He was also named BCCI’s cricketer of the year in 2012-13.

Ashwin married his childhood friend Prithi Narayanan in 2011, after he made his Test debut against West Indies. Ashwin responded by taking four wickets in his next Test — which ended in an Indian win — before starring in the third and final Test with 5 for 156 and 4 for 34 in addition to scoring 103, his maiden Test ton. He was then run out off the final ball of the Test with the scores level and India nine wickets down. 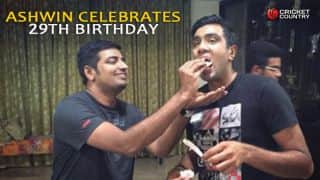 India 'A' vs Bangladesh 'A' 2nd one-dayer, Preview: Visitors need to pull up their socks