Ravichandran Ashwin’s recent performance has been a point for concern.

Ravichandran Ashwin’s recent performance has been a point for concern. Yet, he continues to enjoy the cushion of a berth in the squad. Karthik Parimal wonders whether roping in Pragyan Ojha while temporarily allowing Ashwin a breather will help India’s cause in the near future.

MS Dhoni’s offbeat responses are a welcome deviation from the clichés doled out by other international captains during post-match conferences. Asked why India seldom considers playing only the seamers, Dhoni answered in his characteristic, witty manner: “Whenever we have played with four fast bowlers, two things happen. One the captain gets banned, two we lose.” Although it evoked a few chuckles, it was a nonchalantly highlighted fact. India’s bowling department has banked more on its spinners since the last few decades to eke out wins on turfs across the world. During recent times, however, the team has embarked on a slippery slope despite the presence of two spinners. How does the think-tank intend to fix this conundrum?

After Harbhajan Singh’s relegation, Ravichandran Ashwin was draped with the cloak of India’s primary spinner. In a rather short span of time he bagged wickets in bulk, predominantly on spin-friendly surfaces at home. In alien confines, he’s surprisingly rendered futile, and his non-performance has clearly hampered India’s chances of notching a win. Of course, the batting line-up, too, deserves part of the blame, but it’s the spin unit’s inability — led by Ashwin — to make inroads or drive nails into the coffins of the opposition’s middle-order, regardless of the format, that’s been a major contributing factor to the downward spiral.

As stated by CricketCountry’s Nishad Pai Vaidya in one of his earlier articles, Ashwin’s recent numbers are a cause for concern. While his average soared to surreal figures in a six-match stretch, as underscored in the aforesaid piece, his performance over the last six months in limited-over games do not inspire confidence either. In 20 One-Day International (ODIs) games since the July of 2013, Ashwin has to his name only 20 scalps — with a best bowling performance of two for 37, averaging 47.10 and conceding 5.32 runs per over. Discount matches played at home and the reading becomes appalling: two wickets from nine away matches at an average of 210.50.

Despite the dwindling numbers, Ashwin has enjoyed the cushion of a berth in the squad. His position remains unchallenged, not because there is a dearth of spinners in the lower levels of Indian cricket, but perhaps because none instil in the powers that be the kind of confidence Ashwin does. It would be improper for a layman to unearth technical deficiencies in Ashwin’s approach, however, based on a few statements made by former great spinners — ones who’re always in a good position to examine his action and delivery — it looks like there are some flaws that need immediate ironing.

There is no questioning Ashwin’s skill, but one feels if he’s allowed a breather to fine-tune his technique before staging a return, it could bolster India’s chances.

“It’s simple. Ashwin lacks the required deception to trouble international batsmen. Deception is a quality that should worry your opposition. Not only the batsman who is facing you should be worried but also the man padded up and due to come next should also be worried. The deliveries should work on his mind also,” said former Indian Test spinner Erapalli Prasanna. While one could argue that Ashwin possesses a deception in his pause-and-release delivery — the authenticity of which is debatable — Prasanna thinks otherwise. “I am not very sure if you can call that variation. May be he is imagining that he is deceiving the batsman but does he realise that it is just a single delivery. Once the batsman reads it, he will play the delivery easily over after over,” he says.

So is there in India’s artillery a spinner who’s capable of befuddling a batsman, importantly on overseas pitches? Ravindra Jadeja has been a good find, indeed, but it’s too early to label him a specialist. Pragyan Ojha springs to mind too, and his exclusion time and again, this despite registering brilliant numbers in almost every opportunity presented to him, is baffling. The third fastest Indian bowler to reach 100 wickets, after Prasanna and Anil Kumble, continues to warm the benches even though his team continues to find itself in a spin more often than not. A number of columnists have opined against his exclusion, but none more precisely than CricketCountry’s Chief Cricket Writer Arunabha Sengupta. “He [Ashwin] is often prone to try too much on unresponsive tracks, and likely to run out of ideas and bowl all over the place. Ojha, on the other hand, is prepared to work hard and wait the batsmen out, and win the battles with minute variations,” he aptly writes here.

With tour of England and the ICC World Cup 2015 in Australia and New Zealand lined up in coming months, will Ashwin be persisted with despite insipid returns? He’s been adept with the bat, but surely, batting cannot be criteria for his selection, since there are six other men in the side for just that job. Will Dhoni, and also the selectors — who haven’t been shy in making a few tough calls during the last one year — wield the axe over India’s front-line spinner? There is no questioning Ashwin’s skill, but one feels if he’s allowed a breather to fine-tune his technique before staging a return, it could bolster India’s chances in these coveted tournaments. Ojha is certainly capable of taking over in the interim, and his recent performances back that. A good showing can only bolster his confidence, and maybe he can tag along with Ashwin to form a threatening pair for long-term. 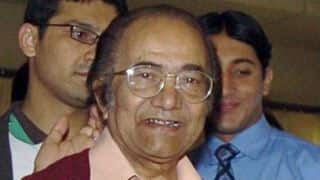