Ravichandran Ashwin has not only certified his growth as an all-rounder whereas Wriddhiman Saha also played an innings long overdue from him.

At stumps on Day One of the third Test between India and West Indies, both teams shared the honours as a great day of Test cricket was bestowed by the fans with a grueling contest between bat and ball. Winning the toss, Jason Holder invited India to bat. Both the teams had a few changes to make as the hosts recalled Leon Johnson in place of Rajendra Chandrika and Under-19 World Cup sensation, Alzarri Joseph got his maiden Test cap. India surprised many with their team combination as each change was more surprising than the last. If they were in a spot of bother earlier, they had only themselves to blame, as they tried too many changes and played rash shots. On the other hand, if they have revived to a certain extent, at close of play, they need to thank the pair of Ravichandran Ashwin and Wriddhiman Saha. Full Cricket Scorecard: India vs West Indies, 3rd Test match

How the top-order crumbled:

The pitch at Darren Sammy National Cricket Stadium had something for the pacers and Holder wanted to impose pressure on the Indians from ball one. Shannon Gabriel did not waste much time as he made India’s opener, Shikhar Dhawan, make the long walk back to the pavilion after he had added only a single to the scoreboard. A well-planned bouncer did the trick for the hosts as they were on course. Debutant, Joseph, sent back one of the modern day greats and India’s Test skipper, Virat Kohli back to the hut to leave India reeling at 19 for 2.

KL Rahul stood by the faith imposed on him by the team management as he stitched an important 58-runs stand with Ajinknya Rahane before bowing out at 50 off 65 balls. Not being known for having a good footwork, at the start of the innings, Dhawan departed early whereas being iffy at the start of his innings, it was not Kohli’s day as he edged one to the slip cordon. Rahul played his shots, paced his innings beautifully and looked like batting on a completely different surface. Though Rahane and Rahul were honest in their approach and were still made to toil hard for runs, they did put up a vital partnership. LIVE: India vs West Indies 3rd Test, Day 1 Live Updates

Just when things started to settle down, Rahul paid the price for playing too many shots and got dismissed. On the other hand, Rahane understood the need of hour and was ready to work for his runs. A bizarre change in the batting line-up and disciplined bowling attack by the opponents had India on the mat till tea. They had lost half the side and the scoreboard read 130 for 5. Sure, the turf was a tough one to bat on but the battle looked lost due to an attacking display of fast bowling followed by a tight line maintained by the spinners, Roston Chase and Kraigg Brathwaite.

The revival process triggered from Ashwin-Saha:

Yes, he is regarded as an astute thinker of the game. His expressions show he is hungry and out there to learn. Ashwin, currently India’s best offie and all-rounder in Tests, was quietly watching the proceedings from the dug-out. He was well guided by Rahane and even though the latter got dismissed for a patient 35, it seems as if his efforts rubbed on Ashwin. Ashwin was again quick to realise that the opponents had to be respected for the way they were bowling and fielding. The outfield was heavy and West Indies were bowling right outside off stump. Now was the time to just go with the flow. This was something the others did not do. They either played too many shots, like Rahul, or lost on patience, due to a strict line and length maintained by the hosts. Ashwin got the backing of Saha, on whom a lot of articles have been penned down recently depicting that he needs to up the ante by scoring more than his usual 40s.

The pair added an unbeaten 108 runs for the sixth wicket before stumps. The way they went about their business needs to be observed more clearly. They were extra cautious of the fact that the next man, Ravindra Jadeja was playing the first game of the tour followed by the tail. They took it upon themselves and started the rescue mission. Ashwin’s ton in the series opener kept him in good stead while Saha was also out there to prove his worth. They started off defensively, left balls outside off stump, kept the ball down and pounced on the few bad balls bowled by the hosts.

The plan was clear. They did not shy away from giving due credit to the bowling team for maintaining a tight rhythm and, in a way, tried to slow the pace of the game. If things do not go according to plans, sometimes it is wise to allow the rivals to dominate and gradually make them run out of ideas. Saha and Ashwin blocked everything and made Holder rotate his bowlers for some luck, something others could not. Suddenly, the bowlers ran out of steam and when the new ball was taken, the duo started counter attacking. It made India reach a respectable total than what was expected off them and that too without any further damage. ALSO READ: India vs West Indies, 3rd Test, Day 1, Highlights: Early joy for hosts and visitors late fightback ends topsy-turvy day

Saha and Ashwin played with the minds of the West Indies team and oiled a clever plan to drop the shoulders of the opponents by end of day’s play. Ashwin has not only certified his growth as an all-rounder whereas Saha also played an innings long overdue from him.

Indeed, the pair masked all the trouble India had put themselves into during the first two sessions. 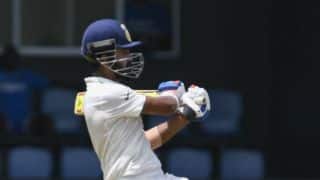 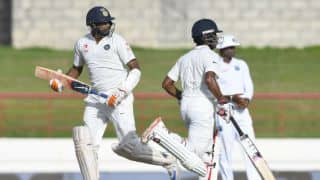