India and South Africa played out one of the greatest draws in the history of Test cricket.

India and South Africa played out one of the greatest draws in the history of Test cricket in Johannesburg. The match which concluded on December 22, 2013, will even go down in folklore, as one of the greatest matches played in cricket. South Africa could not manage to score eight more runs required for a glorious win. On the other hand, India wasn’t able to pick up three more wickets. In fact, it proved to be a difficult task for India with effectively only three bowlers toiling away manfully, as Ravichandran Ashwin was a mere bystander. Shrikant Shankar writes that Ashwin’s low returns away from home can soon become a worry for India.

Before the first Test match against South Africa started, there were doubts as to what should be India‘s bowling combination. India would have most likely gone in with three pacers and one spinner in foreign conditions. So, the question mark was related to who would be the three pacers going to be selected for the Test. India selected Ishant Sharma ahead of Umesh Yadav owing to his experience. Zaheer Khan and Mohammed Shami were sure starters. So, the lone spinner was definitely going to be Ravichandran Ashwin. The off-spinner’s extraordinary batting skills meant that selectors plumped for Ashwin. And that is what will likely help him to keep his place in the Indian team in away Test matches rather his bowling skills.

Actually, Ashwin had a really poor match with the ball against South Africa in the Test match at Johannesburg. He only bowled six overs out of 75.3 in South Africa’s first innings. This despite the fact that South Africa was bowled out for 244 in reply to India’s 280. But conditions at the New Wanderers Stadium were not in favour of spinners, especially during the first two days of the match. Once India scored 421 in the second innings and as a result, set South Africa a world record 458-run target to chase, the general feeling was that Ashwin would get many more overs to bowl.

He actually did bowl the most overs for India in South Africa’s second innings. He bowled 36 overs out of a total 136. He was more economical than the three pacers as well, but the problem was that he went wicket-less in the whole Test. Herein lies India’s biggest worry in Tests away from home. Ashwin is not the biggest turner of the ball. He does have some canny variations and his carrom ball is very difficult to read. Graeme Smith, who was batting quite fluently in the second innings, was troubled by one of Ashwin’s magic deliveries.

But in the 205-run partnership between Faf du Plessis and AB de Villiers, Ashwin hardly troubled them. The line he bowled throughout the match was a middle-stump line. Ashwin regularly pitched the ball on the off and middle-stump line and got it to spin into the right-handers. It was too easy for batsmen to work away on the leg-side. MS Dhoni had kept a heavily guarded on-side field and maybe wanted Ashwin to just dry the runs up from one end, so as to make the duo play some rash strokes. But whatever the ploy, Ashwin did not pick up a single wicket.

Even during the last three overs of the day’s play, when du Plessis was run-out, Ashwin was not brought into the attack against the lower-order batsmen. In such situations, many times spinners get wickets at a canter. The point is that Dhoni did not have enough trust on Ashwin to take wickets. Another point could be that the match was still in South Africa’s favour and drawing the game was India’s main priority. As mentioned before, they needed only eight more runs to make it an even more of a memorable Test.

Another above mentioned fact was that India needed only three more wickets to win an epic Test. And if Ashwin could have provided a few breakthroughs, India would have gone 1-0 up. Ashwin is India’s quickest to 100 wickets in Test cricket, but the majority of his matches have been played at home. In seven innings away from home, Ashwin has only taken nine wickets. There is a stark contrast in the wicket-taking ratios at home and away. India and Ashwin himself needs to rectify that. He may not be as effective in foreign pitches as he is in India, still he should come across a bowler who looks like can take wickets.

Ashwin’s batting abilities far outweigh that of the other spinners in India. Hence, he might get selected in the Indian team more often compared to the others. But With Ashwin not being able to take wickets with the red-cherry away from home, the difference between a victory and a draw and even a loss could be minimal — as seen in Johannesburg. The young team looks set to take on the best in their own den and give them an almighty fight. If Ashwin can get in amongst the wickets more regularly, India can beat the best at home and away. 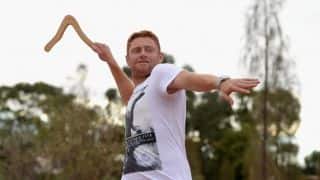