17 wickets for Umesh Yadav in this series. This is the most for him.

1,000 runs for Wriddhiman Saha in Tests. He became 66th India to reach the landmark but is yet 23 runs short of completing 1,000 runs in Tests as wicketkeeper: he had scored 36 runs while playing as a specialist batsman in his debut Test. He needs 23 more to complete 1,000 runs as wicketkeeper-batsman. Once he does that he will become the 6th Indian cricketer to achieve the double of 50 dismissals as wicketkeeper and 1,000 runs, after Farokh Engineer, Syed Kirmani, Kiran More, Nayan Mongia and MS Dhoni. FULL CRICKET SCORECARD: India vs Australia, 4th Test at Dharamsala

64 wickets for Lyon against India, the 2nd-most by a spinner. The record is 105 by Muttiah Muralitharan. Lyon went past Lance Gibbs tally of 63 today.

1st cricketer to achieve the double of 500-run 70-wicket in the same season Jadeja.

499 runs scored by Steven Smith in this series, the joint 2nd-most runs by a batsman in a series among those who missed a multiple of hundred by 1 run. Kumar Sangakkara also scored 499 against Bangladesh in 2013-14. The record is 699 by Doug Walters against West Indies in 1968-69.

17 wickets for Umesh Yadav in this series. This is the most for him. His previous best was 14 in the Border-Gavaskar Trophy of 2011-12 in Australia.

7th instance of Australia s 9, 10, and 11 all scoring ducks in the same innings against India. India vs Australia, 4th Test: Only David Warner can answer if he put himself under pressure, says Graeme Hick 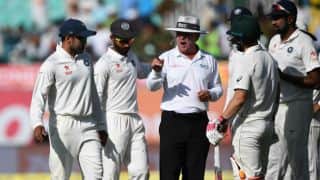