All highlights from the tied encounter between India and New Zealand at Eden Park.

In what was a must-win match for the Indians very few could predict the eventual result of the game. In the first two One-Day Internationals, India had fought hard to chase the New Zealand score. Below are few key moments of the game which was only the seventh tied ODI match played by India.

Since the first match of the series, Martin Guptill has appeared like a man under pressure. His tentativeness ended up giving shaky starts too New Zealand. With Jesse Ryder going for his aggressive strokes and perishing even before the innings had found its momentum, Guptill was supposed to anchor the innings. He finally managed to do the task after surviving yet another scratchy start. Unlike the previous two matches, the pacers were not consistent enough to keep up the pressure on Guptill. Once he was out of the first ten overs, along with Kane Williamson, he started playing his strokes and gave stability to the innings. It was not a flashy century, but an innings that showcased how responsible a batsman he can be. His 153-run second wicket stand with Williamson set the platform for New Zealand.

If Quinton de Kock had been the tormentor for India in the previous series against South Africa, it seems to be Kane Williamson here. His calm and composed attitude was tough to be disrupted by the Indians, and his nimble feet ensured that the spinners where hardly going to be of any notable threat for him. It is to be noted that India had three tough chances to run-out and break the partnership between Guptill and Williamson but squandered it each of the time.

India’s openers were left embarrassed by the short deliveries from the Kiwi pacers and most of the time, they fell for the trap. If Shikhar adopted the careless approach, Rohit adopted a contrasting one by seeing off the early swing and ended up consuming far too many deliveries. This time around in the chase of 315, both Dhawan and Rohit seemed to have been reinforced with the thought of clearing the fence at ease and went after the pacers.

With 64 posted in less than ten overs, the anticipation was there whether these two openers had found their old shine back. But it was not to be when Dhawan once again fell for a short delivery. Rohit’s dismissal only brought back the expectations to ground reality. If there was one thing that everyone was sure about was Virat Kohli’s performance. After being tested for over three overs leaving outside off-stump, Kohli finally lost his patience and edged one behind the wickets. Since then the wickets kept tumbling until the responsibility was back on MS Dhoni. But with Dhoni’s dismissal, the series was all but over for India just waiting for the proceedings to finish.

Corey Anderson — The Man with the Midas touch

Ahead of the IPL auctions, anything Anderson is touching is turning in to gold. There was no swing or threatening pace from the all-rounder, yet in the quest for quick runs, the Indians made some basic errors; it was hara-kiri of such an order that one can almost conclude that Anderson’s aura forced them to play rash shots and gift their wicket away. While he flopped with the bat, Anderson kept the game alive with a wicket every time he came on to bowl.

Sir takes us home after that miraculous partnership

If Ravichandran Ashwin can run a three, there are many more summits which could be easily achievable. Along with Jadeja he played one of the finest innings of his life. Jadeja has been underperforming with his bat for some time now, and there have been questions over his ability to play a responsible innings.

It was only a matter of an innings. It may still be too early to call Jadeja finally can be called a saviour, but today’s innings has definitely changed a lot. It was interesting to see his approach during the innings: while the rest of the batsmen (especially Raina) were struggling against short balls, Jadeja confidently went after the balls and tried his best to convert them in to scoring opportunities. If Jadeja hadn’t been in that mindset, he would never have dragged the short ball outside off and hit the six which he did in the final over. It’s just a matter of hunger to remove the weakness.

The fairytale finish would have been charred to death had Rod Tucker raised his finger to a short ball edged by Jadeja to wicketkeeper Luke Ronchi in the 48th over. Hamish Bennett then floored a simple catch at third-man.

In the end, however, there was pandemonium. With a brace to be scored off the final ball Jadeja hit it through the off, but the stroke was not timed as sweetly as the previous one. The batsmen scrambled for a single and the match ended in a tie. 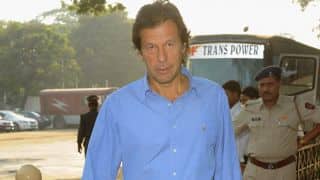