Ray Lindwall: The grace and greatness of poetry in motion

Ray Lindwall: The grace and greatness of poetry in motion

Ray Lindwall was sheer poetry in motion as he ran in to bowl, yet was one of the most dreaded fast bowlers ever to play cricket. Arunabha Sengupta pays homage to the first genuine paceman to take 200 Test wickets on the occasion of his 91st birthday.

Born October 3, 1921, Ray Lindwall was sheer poetry in motion as he ran in to bowl, yet was one of the most dreaded fast bowlers ever to play cricket. Arunabha Sengupta pays homage to the first genuine paceman to take 200 Test wickets  on the occasion of his birthday.

Remembering Ray Lindwall in the whirlwind age of Twenty 20 mania is akin to getting a fleeting glance of an impressionist masterpiece amidst garish spray-painted wall graffiti through the window of a fast-moving train.

Lindwall was cricketing beauty captured in its aesthetic essence and purity — a virtue which is almost obsolete in the era of the instant game.

He did not run up to the wicket — he flowed like a sonnet set in motion. He approached like a graceful yet vigorous wave. At the end erupted a sudden burst of speed and the pistoning of the arm, and as his legs spread in the long stretch of the final stride, the ball was propelled at an incredible speed and the arm came through at 45 degrees. Not all the adherents of classical fast bowling were enamoured of his arm coming down too low. Yet, that ensured a skidding effect, and made his bouncers — or bumpers as they were called in his day — all the more threatening.

Jim Laker thought of heaven as a cricket pitch from one end of which ran in Lindwall, and from the other Bishan Bedi.

Plum Warner once loudly exclaimed “Poetry!” when Lindwall ran in to bowl. The fast bowler himself was surprised when he saw him on film, noting that somehow his effort and pain was hidden by his action, not visible through the moving music that resulted for the eyes.

Yet, for all the rhythm that his motion conjured up, he was one of the fastest in the world – ever. Celebrated opening pairs like Len Hutton and Cyril Washbrook weaved and ducked when he bounced – he did it sparingly but always with immense effect. They also hurriedly brought their bats down when he pitched up. Not always did they manage to meet the ball. In fact, almost two-fifth of the 228 wickets he captured were bowled.

Lindwall, born in Sydney, at the impressionable age of 11 when Larwood visited Australia and bowled through the infamous Bodyline series. He watched the English bowler with wide eyes, and the seeds of fast bowling ambition were planted, to be reaped one and a half decade down the line.

He and other kids of his locality played on patches of green, choosing the street down which the great Australian leg-spinner Bill “Tiger” O’Reilly walked home. “Little did I realise when I first tried so hard to arouse his interest the help and guidance I was destined to receive from him in the years ahead,” Lindwall later wrote in his charming autobiography aptly named Flying Stumps.

At the St George club, he came under the tutelage of O’Reilly. The astute Australian Test cricketer used the innovative technique of photography to help Lindwall see himself in action and correct his faults.

Drafted in the Second World War and sent to the South Pacific, Lindwall suffered horribly from tropical diseases. But he did spend his time marking out his run-up between palm trees.

A phenomenal all-round sportsman, Lindwall could easily have been a rugby league international, and he ran 100 yards in 10.6 seconds. However, luckily he was smitten by cricket and then soon made the cricket world fall in love with him.

He made his debut against New Zealand alongside his mentor, but it was during the series against England, that he and Keith Miller settled as the spearheads of Australia’s attack.

Miller had already established himself as an all-rounder of rare calibre, regaling all during the amazing Victory Tests. He batted at the top of the order while Lindwall came in amongst the tail. However, it was Lindwall who got to a Test century first, scoring 100 at the MCG in the New Year Test of 1947, batting at No. 9, notching up the second fastest hundred scored by an Australian till then.

He followed this with 7 for 63 at Sydney, bettered that with 7 for 38 against the hapless Indians at Adelaide, and by the time he travelled to England in 1948, he was an established star of The Invincibles as well as the most potent weapon of skipper Don Bradman.

He took 27 wickets in the series at 19.62 apiece, including 6 for 20 at The Oval as England were bowled out for 52 in Bradman’s farewell Test. He troubled all with his pace, in conjunction with Miller becoming the most feared pair of opening bowlers since Jack Gregory and Ted McDonald. During the tour, he pummelled batsmen with bumpers, hitting both Denis Compton and Cyril Washbrook on the head.

He played on for over a decade, making up for the lost years of the war by continuing to open the bowling for Australia till he was 38. There were more memorable Ashes series, including 26 wickets in the summer of 1953, during which he yorked Len Hutton with the second ball of the Test at Leeds, a dismissal acknowledge with the solemnity of declaration of war. There were victorious campaigns to the West Indies where Frank Worrell retold of how Miller and Lindwall got after them with the ball and the bat, including a 118 with 14 fours and 2 sixes in Kensington Oval.

Except for some failures on heartless wickets of the subcontinent, he remained consistent all through. He would send down his deliveries, and at the end of the over he would, according to David Firth, “slap his cap onto his fair head, usually crookedly, and tug his sweater on, causing his shirt collar to disappear, and that florid countenance would break into a grin as he exchanged quips with the other slipsmen.”

Neville Cardus compared him to Ted McDonald in terms of hostility and artistry combined in one winning hero, but seldom penned those flowery odes to Lindwall, preferring to spend his post-War words on his more debonair partner in crime — Keith Miller. Indeed, Lindwall was one of those sublime performers who never had to proclaim their achievements by beating their drums or having them beaten. Yet, he was the first genuine fast bowler to capture more than 200 wickets in Test cricket. His 61 Tests brought him 1,502 runs at 21.15 with 2 centuries and 228 wickets at 23.03, a Test double in the days when it meant something.

After having run in to bowl for the final time in measured steps of delight, he continued to make his living in acts steeped in beauty, running a flower shop with his wife in Brisbane.

That he enjoyed playing the game and did so with a purity of spirit as refreshing as his run up can be determined from anecdotes and reflections.

His Wisden obituary notes: “While still playing for New South Wales, he once saw the young Alan Davidson bowl a bouncer at an opposing No. 8. You’ve just insulted all fast bowlers, Lindwall told him. You’ve admitted No. 8 can bat better than you can bowl. Get into the nets and learn how to bowl. And he took him there, and taught him.“

And at the end of his Flying Stumps he wrote, “Come what may, cricket has given me a wonderful life. I would not have changed a minute of it.“ 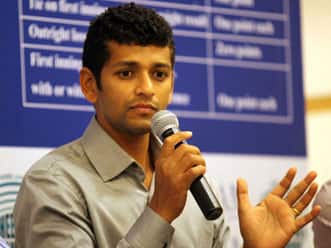 Being in Sachin Tendulkar's company is an education: Amol Muzumdar