Royal Challengers Bangalore (RCB) battle Rajasthan Royals (RR) in the Eliminator of Indian Premier League (IPL) 2015. The match is likely to be a close one, given how well matched the sides are. Royal Challengers Bangalore (RCB) battle Rajasthan Royals (RR) in the Eliminator of Indian Premier League (IPL) 2015. The match is likely to be a close one, given how well matched the sides are. Shiamak Unwalla talks about a number of similarities between RCB and RR.

It is quite rare for two IPL sides to be as similar as RCB and RR have been this year. On the face of it they are two entirely different teams, given their history and diversity. However, on closer viewing, both sides are remarkably similar.

RCB have been well served by their top three of Chris Gayle, Virat Kohli, and AB de Villiers. On the other hand, RR have relied heavily on their opening duo of Shane Watson and Ajinkya Rahane as well; but the important aspect to be noted is that while RR have not had a static No. 3 batsman, whoever has batted at that position has more often than not fired.

Another similarity is that both sides have some talented uncapped Indians who have impressed with their skills. While RR have the likes of Karun Nair, Sanju Samson, and Deepak Hooda in the mix, RCB have Sarfaraz Khan, Yuzvendra Chahal, and Harshal Patel.

The presence of a key pace-bowling South African all-rounder who can hit the ball long and hard is another commonality; RR have Chris Morris, and RCB have David Wiese. Both men have played one potentially game-changing innings that was not enough for a win. Morris hit an 11-ball 34 not out against SRH in a losing cause, while Wiese’s 25-ball 47 not out against MI was not enough to grant RCB a win.

Then there are the captains: Virat Kohli for RCB, and Steven Smith for RR. Smith captained RR at the start of IPL 2015 while Shane Watson was injured, and he took over once again toward the latter stages of the tournament. Kohli is young, brash, and the future leader of Team India across formats. Smith is also young, though not as brash, but is the future leader of Australia. Both batsmen are considered to be the most talented batsmen for their respective national sides.

And finally, a look at the points table tells the same story for each team. Both have won seven and lost five of their 14 matches, with two of their games being rained out. In fact, one of the games that was rained out was between RCB and RR.

No two teams are as evenly matched in this edition of IPL as RCB and RR. There is not a lot to choose between the two teams, and the eliminator will in all likelihood be an engaging and close contest.

(Shiamak Unwalla is a Whovian and all-round geek who also dabbles in cricket writing as a reporter with CricketCountry. His Twitter handle is @ShiamakUnwalla) 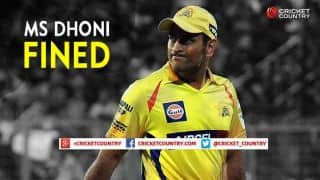