This was Bangladesh s first Test on Indian soil. With this, every Test-playing nation has now played in every other Test-playing nation. Additionally, every team barring India, Bangladesh, and Zimbabwe have also played Tests in UAE. India have played 3 Tests at Rajiv Gandhi International Stadium, Uppal, Hyderabad, drawing the first and winning the most recent two.

Rahul has been dismissed for under 40 in 15 of his 20 Test innings. His other 5 innings have fetched him 4 hundreds and a fifty.

With a boundary off Mehedi Hasan, Cheteshwar Pujara became the highest run-getter in an Indian First-Class season. He broke Chandu Borde s record of 1,604 runs in 1964-65. Pujara has played in only 21 innings, while Borde had scored his runs in 28 innings. Pujara came close to breaking Borde s record in 2012-13 when he scored 1,585 runs. It must be remembered here that Pujara has a full 4-Test series against Australia in hand.

Pujara and Murali Vijay added 178 runs for the second wicket. This was their 5th century stand, the most by any Indian pair in a season. They went past the existing record of 4, held jointly by Vijay Hazare and Rusi Modi in 1948-49, Chetan Chauhan and Gavaskar in 1978-79, Aakash Chopra and Sehwag in 2003-04, and Dravid and Gambhir in 2008-09.

This was also the 7th century stand between Pujara and Vijay for the second wicket. They are now level with Gambhir and Dravid, and one behind Gavaskar and Amarnath, and Sehwag and Dravid.

This was Vijay s 9th Test hundred. With this ton, Vijay equalled Gambhir s tally of 9 hundreds as an Indian opener. He now has the joint 3rd-most centuries by an Indian opener after Gavaskar (33) and Sehwag (22).

Kohli scored his 16th hundred in Tests. This was also his 9th Test hundred as captain, which put him at par with Mohammad Azharuddin. Only Gavaskar (11) has more hundreds as an Indian Test captain.

This was also Kohli s 12th hundred at No. 4, the joint 2nd most by an Indian batsman, at par with Gundappa Viswanath. The record is held by Tendulkar (44).

With this century, Kohli has now scored centuries against all seven opponents in Tests. This was his first Test hundred against Bangladesh. He has not played against Pakistan and Zimbabwe.

Kohli and Ajinkya Rahane have added 1,467 runs between them for the 4th wicket, at 66.68. This is the highest average by an Indian pair for 4th wicket (qualification: 1,000 runs) and 7th overall.

Karun Nair became the third cricketer to miss a Test (after Simpson and Inzamam-ul-Haq) immediately after scoring a triple-hundred. Additionally, Andy Sandham s treble had come in his last Test.

This was the first time India went in with three seamers (Ishant Sharma, Bhuvneshwar Kumar and Umesh Yadav) in a home Test since the Bengaluru Test of 2015-16 against South Africa, when they had picked Ishant, Varun Aaron and Stuart Binny. The record is four, which has happened several times. 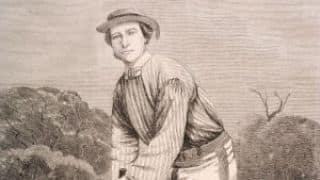