Batsmen with solid techniques thrived under the conditions in the 1987 World Cup.

With the tournament being hosted by the subcontinent teams, one probably expected the spinners to rule proceedings. There were excellent performances from Maninder Singh, Abdul Qadir, and Eddie Hemmings, but generally they were restricted to a supporting role: Tauseef Ahmed, Roger Harper, John Emburey, and John Traicos were perfect examples.

Batsmen with solid techniques thrived under the conditions. Australia thrived on the opening partnership of Geoff Marsh and David Boon; with the single almost always on, and Dean Jones, Mike Veletta, and Steve Waugh providing the fireworks at the bottom, Australia invariably piled on decent scores. Craig McDermott spearheaded the bowling attack, and eventually went past a rampant Imran Khan; the others did not run through sides, though Bruce Reid, Waugh, Simon O’Donnell, and even Allan Border chipped in.

Batting records: The list was dominated by three openers; Graham Gooch led the way, followed by Marsh and Boon. Richards became the first batsman to score three hundreds in the tournament (one in each edition of 1979, 1983, and 1987); this time it was a humongous 181 — the highest score in the history of the tournament till then. He went past Kapil Dev’s 175 not out.

Despite Sri Lanka losing all their matches (at least four of them comfortably), Arjuna Ranatunga maintained his characteristic unflappable poise at the crease. He scored 252 runs being dismissed thrice, leading the averages chart.

Kapil did not score a lot of runs in the tournament (he managed a solitary fifty), but when he did, he made them quickly. A strike rate of 127 in 1987 was a remarkable feat. Even more astounding, however, was Richards’ 364 runs at 65 and a strike rate of 107. Gus Logie scored over a run a ball as well.

Richards’ record-breaking hundred was followed by what was probably the innings of the tournament: with Zimbabwe down at 104 for seven chasing 243, Dave Houghton scored a 137-ball 142 to take Zimbabwe within touching distance of the target; they eventually lost by three runs. In other news, Marsh emulated Glenn Turner (in 1975) by becoming only the second batsman to score two hundreds in a single edition of the World Cup.

Bowling records: Though Imran, intent on a Pakistan win, had outstanding numbers, McDermott topped the charts. Patrick Patterson also had excellent numbers, but for the first time the spinners had a crucial impact. Unfortunately, the effect was more on the economy rate than on strike rates, which meant that the wickets chart was dominated by speedsters.

Imran finished a wicket short of McDermott’s tally, but his 17 wickets came at an astounding 13.06 — five clear of Patterson, his nearest competitor. The near-lost art of leg-spin was somewhat revived by Qadir: 12 wickets at 20 was no mean feat.

Once again, Imran finished way clear of others (nobody came within six points of his strike rate of 17.6). The top five wicket-takers were also the top five in terms of strike rates, which probably tells a thing or two.

The top five names in the economy rates chart all belonged to spinners. Four of these went to off-spinners, which is an indication of the role they were restricted to. The era of Muttiah Muralitharan and Saqlain Mushtaq were still a few years away.

Nine times in the tournament did a bowler take four wickets in an innings, but in only once (McDermott in the semifinal against Pakistan) did someone claim a five-wicket haul.

It took four World Cups to witness the first hat-trick — by Chetan Sharma against New Zealand at Nagpur. He clean bowled Ken Rutherford, Ian Smith, and Ewen Chatfield (it was the only time Chatfield batted as high as No. 9).

Fielding and wicket-keeping: Kiran More and Greg Dyer finished with 11 dismissals apiece, but the stark difference lay in the break-up: while More had six catches and five stumpings, Dyer’s tally read nine catches and two stumpings. After all, Border was Australia’s most successful spinner.

For once, the top fielders were not dominated by the men at slip. There were a few spectacular catches in the outfield, with Kapil leading the way.

Record partnerships: When Richards massacred Sri Lanka at Karachi with 181, Desmond Haynes scored an unnoticed 105 at the other end. It was the first time two men scored hundreds in the same innings. They also registered the highest partnership (182) of the tournament for any wicket. After Haynes got out, Gus Logie walked out and helped Richards put on another 116 — the best fourth-wicket stand. The most iconic partnership of all was perhaps 117 between Houghton and Iain Butchart during their valiant chase against New Zealand.

Team aggregates: The top three scores of the tournament all came against Sri Lanka. While West Indies broke all records by piling up 360 for four (it must be remembered that it was a 50-over match), India and Australia piled up one big score against each other.

Zimbabwe and Sri Lanka shared the lowest five scores between them. Zimbabwe scored 135 and 139, but they managed to go past 129 — the lowest score of 1983. For the second consecutive time no side was bowled out for a two-digit score.

By balls to spare: 0 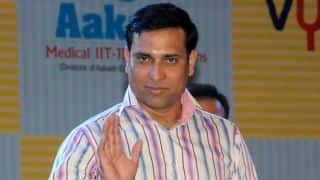 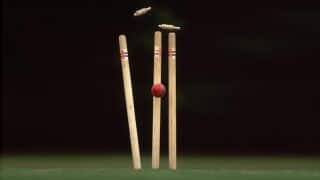